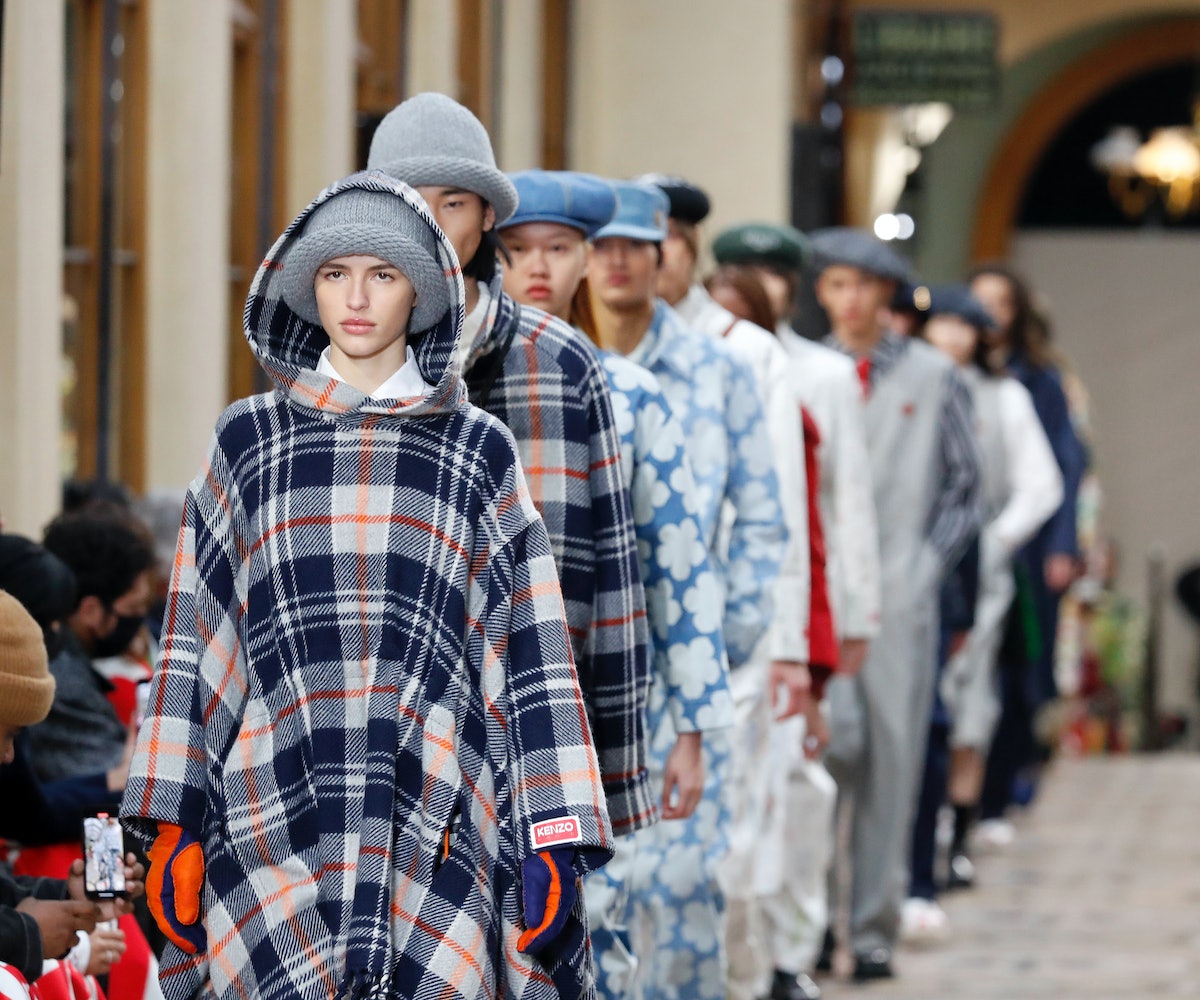 Paris Fashion Week Men’s Fall 2022 wrapped on Sunday, Jan. 23, with one of the most anticipated shows of the season: Nigo’s debut as artistic director of Kenzo. The global streetwear superstar, best known for founding the Japanese brand A Bathing Ape, was appointed by LVMH in September 2021. Now, four months later, his first collection has come to fruition.

“Kenzo san’s approach to creating originality was through his understanding of many different cultures. It is also the essence of my own philosophy of creativity,” wrote Nigo in an Instagram post upon announcing his brand new role. “Inheriting the spirit of Kenzo san's craftsmanship to create a new Kenzo is the greatest challenge of my 30-year career, but, together with the team, I intend to devote myself to it.”

As one of the most influential names in streetwear, the industry expected Nigo’s Kenzo to be another high-end brand going through an underground-driven revamp, but he has other plans. Instead, Nigo tapped into the earliest archives of the late designer Kenzo Takada, bringing a fresh and focused perspective that aims to be “intrinsically exciting,” he told The New York Times. So far, after a solid debut with plenty of buzz, it’s made everyone excited to see what Nigo will bring next.

Ahead, we break down the best and most memorable moments from Kenzo’s Fall 2022 runway show, from the soundtrack’s new album sneak peek and celebrity-studded front row to the new collection’s inspiration and soon-to-be coveted accessories. Read on for more.

Kenzo’s Fall 2022 runway show took place at the shopping arcade Galerie Vivienne in Paris, a tribute to Takada’s first store and show location in 1970, the same year that Nigo was born. Choosing that very same spot for Nigo’s artistic director debut, now more than five decades later, feels like a true full-circle moment, as he’s also the first Japanese designer to take on the helm since Takada’s departure in 1999.

With Nigo’s massive influence in streetwear culture, it’s no surprise that his front row was studded with famous friends, including Pharrell, Tyler, the Creator, Pusha T, J Balvin, and Kanye West, who arrived at the show hand-in-hand with his new girlfriend (and matching fashion muse) Julia Fox. A new generation of celebrity fans also made an appearance for the momentous event, including British musical artists Shygirl and Bree Runway, TikToker Avani, Euphoria breakout star Dominic Fike, and rapper Gunna.

Having literally inspired generations of streetwear-inspired designers and brands, Nigo’s new role at Kenzo seemed like a way for LVMH to tap into the underground-gone-mainstream subculture yet again. But the Japanese designer channeled his and Takada’s mutual love for Americana style instead, mixing his expertise of streetwear, formalwear, and sportswear into what Nigo calls “real-to-wear,” a unisex offering that fuses tailoring and workwear.

Ivy League-inspired outerwear is adorned with Japanese maps, Takada’s original sketches, and academia-style details. Wool suiting is covered in plaid and pinstripes as a nod to Japan’s fascination with British style during the ‘80s, while some structured garments take inspiration from Japanese potters and tea ceremony garb.

While Humberto Leon and Carol Lim made all-over eye motifs and a tiger graphic all the rage among the street style crowd during their tenure as co-creative directors for Kenzo from 2011 to 2019, Nigo is banking on the storied fashion house’s floral prints — from supersized poppies to blooming cherry blossoms adorning knitwear, separates, and matching sets.

Of course, there had to be a little bit of streetwear-savvy thrown into the business model: Kenzo’s seasonal collections will be complemented with monthly limited-edition drops.

Nigo’s new signature prints for Kenzo are also found on a slew of bag designs revived from the archives, including reversible crossbody pouches, pebbled leather top-handle purses, duffles, and more. But what will likely be a hit next season is Kenzo’s hat selection, like oversized berets emblazoned with “1970” and chunky knitted beanies with rolled edges.

Nigo For Kenzo Fall 2022 Debut: The Show Soundtrack Was A Sneak Peek Of Nigo’s Upcoming Album

For Nigo, the runway show music was just as important as his debut collection. The 15-minute soundtrack previewed songs from the designer’s newly announced album I Know Nigo, due out on March 25 with its first single coming on Friday. The upcoming release is stacked with features, including Pharrell, Pusha T, Kid Cudi, A$AP Rocky, Tyler, the Creator, Lil Uzi Vert, Teriyaki Boyz, and more. This marks a return to music after 20 years for Nigo, who used to release mixtapes and DJ in addition to running his own brand.