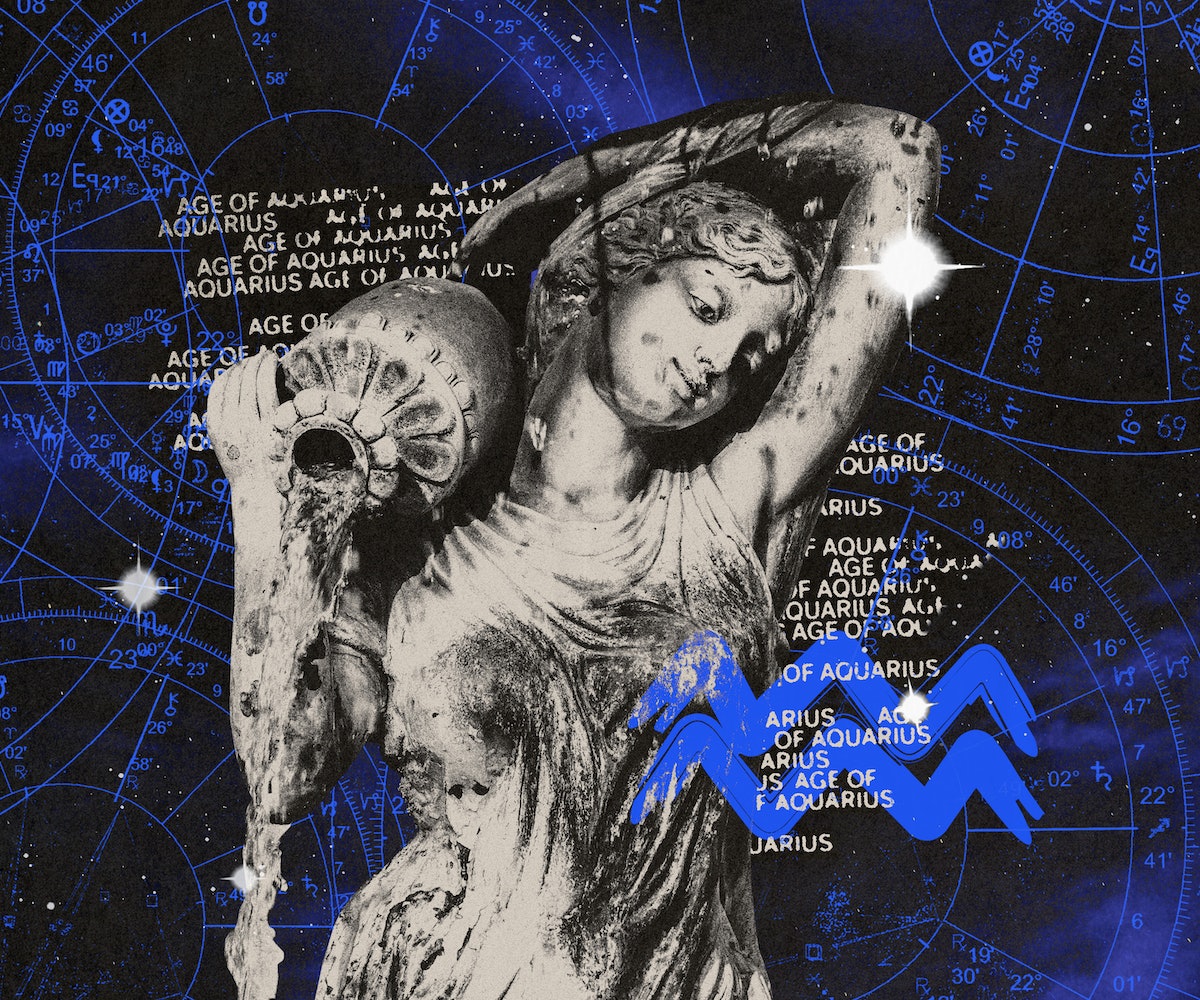 Since 2020, Aquarius has gained momentum as an astrological talking point, with the year’s great conjunction in the air sign initiating a heady Saturn in Aquarius saga, and the impending arrival of Pluto in Aquarius in 2023. Cliched wails from Hair ring through the land, harking the dawn of the Age of Aquarius. But what exactly is an astrological age, anyway? And what happens when this mythic edition begins, in earnest? We break down the possibilities to come for this era of unprecedented change.

Hang on tight, because this is where it gets heady. In the study of the earth itself, astrologers observe the ecliptic — or the earth’s orbit around the sun — along with the celestial equator, an imagined extension of the earth’s equator into space. The intersection points of the ecliptic and celestial equator are equinoxes. Because of the earth’s imperfect orbit, equinoxes change position, gradually, moving into a different sign over approximately 2,000–2,160 years. A complete cycle takes around 26,000 years to complete, and is known as a “Great” or “Platonic” Year. You can imagine these equinox intersections as starting points in the earth’s orbit, which slowly move backwards over time, at one degree over 72 years.

These 2,160 year intervals, in each sign, are known as Great Months, or Ages, each with their own epochal stories of human change and development. But here’s the gag: The equinox points precede backwards, meaning that we’re currently ending the Age of Pisces and fast moving into the Age of Aquarius. Because of the slow advancement through the ages, they don’t end and begin precisely, but slowly shift and change form.

The Age of Pisces is speculated to have begun around the time of Christ, culminating around 2100–2160 CE. Yet some believe that the Age of Aquarius is already here. In his Complete Astrology, Alan Oken writes that the current transition between ages is “much like the period between childhood and puberty: the process is gradual. Today, we find that we live in the legacy of Pisces and the promise of Aquarius.” What are the natures of the Piscean and Aquarian Ages, and how do we know when we’ve crossed from one to another?

CATCH-UP: THE AGE OF PISCES

Broadly speaking, each double-millenium epoch sums up the themes of its designated sign. Astrolada notes how the Age of Gemini (about 6,000–4,000 BCE) awakened an explosion of emerging written languages and recorded glyphs, along with the development of new trades, crafts and skills. In Complete Astrology, Oken centers the Age of Taurus (4,220 BC-2,160 BCE) around the tilling of the fields and development of agricultural super-societies like Ancient Egypt, Greece, and India. Out of Egypt, the Israelites grabbed the ram’s horn and initiated the Age of Aries (2000–1 BCE), a time of bloody conquest defined by Alexander the Great, Julius Caesar, and the brutal rise of monotheism.

And so we arrive at the common era, Anno Domini, wrought by the two fish of Pisces: Jesus Christ and Judas Iscariot. Of course, for all the empathy Pisces commands, it’s still the sign of suffering, imprisonment, and delusion. This new civilization would indeed be more united than ever before, and therefore more vulnerable to unprecedented, globalized monstrosity: the mass oppression spearheaded by the Catholic Church; annihilating diseases like the plague; and the large-scale genocides of the last 200 years.

And yet, the world is bigger and more connected than ever, every smartphone a key to an immortal, incalculable catalog of art, culture, history, thought, and expression. This hyper-exposure to everything, everywhere, all at once has likely rendered us as addicts to a drip of novocaine for the soul, but suffice it to say, we’re a part of something bigger now.

So when is the Age of Aquarius coming? Astrologers argue about when the Age of Pisces ends: the calculated launch of the Age of Aquarius should be in the 22nd century, around 2160. And yet, 2021’s seven-planet stellium in Aquarius led other theorists to believe that we’ve arrived. Certainly, anyone born during that alien awakening will be children of tomorrow.

Regardless of when exactly the story changes, it’s clear that we’ve been in the transition phase between Pisces and Aries for quite a long time. Many cite the discovery of Aquarius’ ruling planet, Uranus, in 1781, as the launch point into this integration of technological splendor with communal possibility. Astrologer Ruby McCollister writes that the years since Uranus’ arrival has brought forth a “flourishing of science, technology, philosophy, literature, music, social opportunities in virtually every aspect of human life, which exploded Western civilization toward liberation, freedom, and choice.”

Aquarius governs mass communication; Oken writes that “the only methods available for the dissemination of information prior to the discovery of Uranus were by foot (human or animal), ship, mouth, or pen.” The past few centuries have delivered a quantum leap towards cyber-utopianism, with the past few decades, specifically, blasting us towards the event horizon. Youth culture, a hallmark of Aquarius, has never been more powerful: Look to contemporary rave culture as a perfect blending of ecstatic tribalism with technological (and pharmacological) innovation.

Piscean consciousness is the endgame of the zodiac, a merged, mass union of souls through time and space. In the midst of an opioid crisis, a corporate contest for streaming eyeballs, and the unending perpetuation of religious bloodshed, it’s clear we can’t handle the current…and it’s not even at half-stream yet. Oken writes that the elements required to “raise the general level of consciousness of the earth and its inhabitants…are not readily available to present-day humanity. The proper physical, mental and spiritual vehicles have to be developed through the long evolutionary process.” Only Aquarius can build these vessels, spaceships and time machines to deliver us.

THE AGE OF AQUARIUS

Pisces is a water sign, ruled by the blurry sea god Neptune. Aquarius, co-ruled by Saturn, is of air, trading in the ideological, methodological, and informational. Aquarius envisions the future, and helps build for it. Though both signs deal with the interconnected global population, Pisces emphasizes our spiritual oneness, while Aquarius focuses on the humanitarian fulfillment of human needs and potential. Essentially, it’s Christianity and Communism, two modes of thought which have led to both liberation and enslavement.

The Age of Aquarius will shift the human picture on ideological grounds, rethinking our concepts of blood relationality, statehood, finance, and value. Roll your eyes at the exhausting cancel culture discourse of the Saturn in Aquarius era, but it’s just the beginning, as we head into heady debates over what living beings are entitled to. Why do we work, exactly? What is the point of money? If any age will yield interspecies, interplanetary contact, it’s this one, and to embrace our extraterrestrial overlords, we’ll need to present a united front free from individuality, distinction, and entitlement.

Speaking of space travel, our bets are on the Age of Capricorn (approximately 4000-6000 CE) to take us into Total Recall and Dune territory, with the colonization (or peaceful integration!) of new worlds. The children of the Aquarian Age will deliver the quantum leaps to get us there: the mushroom spore space engines of Star Trek: Discovery; the wormhole-busting science of Interstellar; the linguistic breakthroughs of Arrival. Communication will be at the core of everything. We’re already entering an era when anyone can be their own radio tower; once the means of technological dissemination are fully owned by all people, anything will be possible.

Of course, like any sign, Aquarius has a dark side. What are the ethics of technological progress? What is preventing our “ideal” society from becoming one of exclusion and manipulation? Already, China’s developing social credit score and our fast progress into Gattaca’s reality of genetic engineering indicate a disconnect between ethical reality and authoritarian opportunism. Indeed, for all its affirmations of individuality and human rights, Aquarius is a global sign, concerned with organizing the populace at large. Perhaps we’ll see the rise of queer, tribal states, as depicted in the contemporary X-Men comics’ mutant nation of Krakoa. Inevitably, we’re in for more bureaucracy, totalitarianism, and one-size-fits-all fascism, forcing us to conform for the sake of some grim greater good.

And yet, beyond the assembly-line nightmare, there remains great possibility for a species entirely activated, no longer burdened by the servitude, martyrdom and victimhood of this Piscean era. Oken writes that in this age, “humanity as a whole is the messiah…each individual can therefore find this light within and bring it forth to illuminate others until the entire race of man becomes enlightened.” The way to this contained, clarified, collective elevation will likely be bloody. But a true Aquarian knows that there’s always a new future around the corner. Don’t indulge in whining about the end of the world: The new dawn is already here.