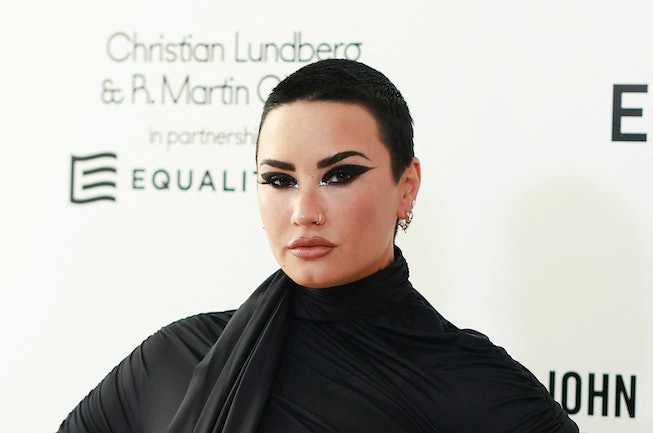 All I ever want in this life is for Demi Lovato not just to survive, but thrive. The singer has a penchant for being in the spotlight for strange antics, like showing off fake Egyptian antiquities on Instagram Stories, doing spon-con for a conspiracy theory website, or arguing that aliens is a derogatory term for “extra-terrestrials.”

But besides making headlines for their peculiar extracurriculars, Demi’s most consistent talent is their music, which, from Camp Rock (remember that?) to the before-its-time bisexual anthem “Cool for the Summer,” has always rocked. Now, the singer is gearing up to release their eighth studio album, which, unsurprisingly in Travis Barker’s 2022, will see a return to her pop-punk roots. Demi joins other artists like Avril Lavigne and jxdn, who are looking to capitalize on the natural lifecycle of a trend.

“Getting emotional listening to my new album because I'm so proud of it. It's my absolute best yet and so representative of me, where I started and who I am today,” the singer wrote on Instagram. “Yesterday I posted a song called ‘Happy Ending’ and even tho I write this in an incredibly dark place I’m so grateful that I’m no longer in that low, cold and lonely place..I’m sure that no matter what happens in my life..my happy ending is never having to fall into old habits again.”

Along with the post, Demi also shared a video of themselves lip syncing along to a new song from their upcoming album. Making good on their promise, it sounds like early Avril Lavigne, with a chorus about the “City of Angels.” To be a celebrity waking poetic about L.A. — a hometown hero!

We don’t know much yet about the album, but Demi’s been dropping hints for a past few months about their new direction. “A funeral for my pop music,” the singer captioned a January 2022 Instagram post, which showed them sitting alongside members of their team.

Demi also used the infamous Julia Fox audio on TikTok to describe their new album as “a masterpiece if I do say so myself.”

While we eagerly await a new chapter of Demi, you can watch their bonkers, wildly entertaining dark horse Peacock show Unidentified With Demi Lovato, where they search for aliens — featuring an acapella rendition of “Skyscraper,” which Demi sings to a ghost.