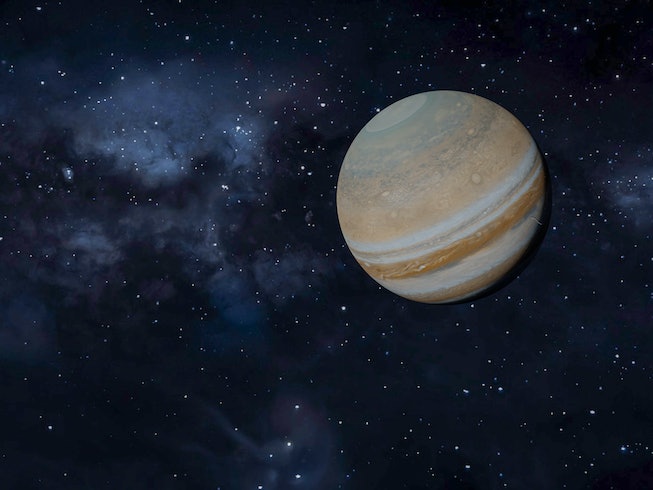 Kaboom. You’ve made it through the journey of the personal planets, working with the sun, moon, rising, Mercury, Venus and Mars to understand your gifts and shortcomings. But now what? If you’re to be of use to your generation, and to the future of the human race, you’ll have to bring all these disparate sides of yourself to synthesis. Enter Jupiter, the planet of culmination and expansion, the lightning bolt from heaven which sets your chart ablaze and directs you to higher purpose. What adventure, advancement, or abundance is Jupiter leading you to next? Consult our guide for all you need to know.

Jupiter is the biggest body in our solar system. It corresponds to the Roman god Jupiter, a.k.a. Zeus, the king of the heavens and hurler of lightning. Zeus was not only the supreme power of Mount Olympus, but something of a cad, who liked to get around and have a good time, often changing form to seduce his latest mortal obsession. Jupiter rules Sagittarius, the sign of new adventures, ideas, and possibilities, of seeking and pushing and discovering. Ruling the ninth house of new horizons, Jupiter trades in travel, study, and spiritual evolution — namely, the collection of any experiences which expand your identity and worldview. In your chart, Jupiter reveals where you go big: where possibility, success, and new voyages await.

Jupiter is also the co-ruler of Pisces (with Neptune), and the 12th house, where all of life’s lessons wash up to be collected, processed, and alchemized. Jupiter, then, acts as a site of wisdom and mastery, which Alan Oken describes in his Complete Astrology as “the stage in one’s development where Man’s soul has triumphed over its experiences on the Earth and has obtained the wisdom which imparts the understanding of universal law.” Spending about a year in each sign, Jupiter is the last of the “personal” planets — the bridge to Saturn, Uranus, Neptune, and Pluto, the “generational” planets which tie our fate into the larger global story. This, then, is our point of wisdom, study, or mastery: where we make sense of all the disparate pieces and realize what it is we have to offer. Think of Buffy, in season five, meeting past Slayers and hitting peak shape before facing her greatest ever foe; or Aang, on Avatar: The Last Airbender, finally harnessing all four elements to defeat the Fire Lord.

JUPITER IN YOUR CHART

In Cosmos & Psyche, Richard Tarnas describes Jupiter as having “the capacity and impulse to enlarge and grow, to ascend and progress, to improve and magnify, to incorporate that which is external, to make greater wholes.” Look to Jupiter’s house and sign placements for insight into where your ride takes off, where fortune and higher callings await. If you’ve got Jupiter in Libra, in your tenth house, you will likely radiate on a red carpet or some arena of traditional success. Why not claim your VMA? With Jupiter in Cancer, in the sixth house, you may feel most buoyed and connected when acting as a healer. This is where you vibrate a little bit higher.

Of course, Jupiter, like any other planet, can go too far. Neither Pisces nor Sagittarius are known for their restraint, and with the hard-partying thunder god as its core archetype, Jupiter can often blast into overdrive. You know that time you got really high, came up with the greatest idea in history, wrote it down, then read over it in the morning…to find it was complete gibberish? Or when you staged a makeover montage and maxed out your credit cards, all for the sake of the “new you?” Look to challenging aspects with other planets to see where self-aggrandizement, excess, or lack of limits can veer way off the rails.

That said, when it comes to houses and planetary dialogues, Jupiter acts like a spotlight, a rainbow bridge, or a surge of power. Even if the fuse may tend to blow, this is still a spectacular window to expansion and activation. Use it.

Here’s how connections play out for Jupiter: through conjunctions (immediate and intense alignment); trines (60 degree, collaborative angle); squares (90 degree challenge from a “backseat driver”); and oppositions (180 degree confrontation, or faceoff). Remember that harsher aspects, like squares and oppositions, often lead to growth, change, and metamorphosis; rarely is there such a thing as a “cursed” placement. As Oken warns in his Complete Astrology, “a ‘fine’ aspect does not necessarily make a fine person.”

JUPITER AND THE SUN

What’s not to love? When the star of our solar system interacts with its biggest planet, expect a spectacle. Jupiter enlivens any planet it meets, but when in contact with the sun, it can make you the life of the party — who may have a hard time calling it a night. As the planet of wisdom, experience, and expanding horizons, Jupiter can direct the sun on spiritual and intellectual journeys, which can lead to a life of adventure, aimless wander, or both. Jupiter will inspire you to fly for the sun. Just make sure your wings don’t sizzle and burn on the way up.

JUPITER AND THE MOON

Luna’s intuition, wisdom and empathy awaken to grand magnitude through any connection of these planets. The expansion of your inner life makes you a powerful channel and creative vessel, but having a wide-open heart can be a liability. Watch out for issues of codependency, poor boundaries, or delusions of grandeur. Jupiter knows no limits, which isn’t necessarily the best thing for relationships.

Flashes of lightning inspire Mercury’s gifts for language, communication, action, and expression: a team-up of these two planets lights up your circuit board at maximum voltage. Inevitably, challenging aspects can fry the mainframe, making for scattered minds, strident political voices, and willow-the-wisps who can’t seem to stay in one place at a time. Refine what it is you’re looking to say and do, and these two will work for you. Otherwise, you’ll leave us looking for genius amid the gibberish.

These girls know how to have a good time. When paired together, Jupiter takes Venus from frumpy schoolgirl to princess of Genovia. Let the makeover commence! Challenging aspects reveal your relationships with scarcity or overcompensation: namely, where you’re blocked from delight and indulgence, or where you go way overboard, burning through your budget to maintain a lifestyle you can’t afford. If these two are at play in your chart, you’re entitled to a life of joy and luxury — just make sure you’re aware of the cost.

A different kind of party ensues with these two. When Jupiter is paired with the planet of aggression, ambition and physicality, it heralds the arrival of an earth-shaker, who gets what they want and won’t take no for an answer. Jupiter’s lust for adventure and escalating experiences can go into overdrive when activated by Martian rays. make sure you’re not going too hard to overcompensate for a bruised ego, like those people who post videos from their CrossFit classes.

Expansion versus contraction. Ideally, the dialogue between these two archetypes should unite soaring dreams with realistic concerns, allowing you to actualize and sustain your dreams. But Saturn can often take the form of a mean mommy, shutting your manic project down before it’s started, or cycling you through sagas of radiant optimism and crippling depression. Both archetypes must be faced and embodied if you’re to live a life of balance.

Any combination of the planets of wisdom and genius will produce an original thinker, someone called to new and bizarre experiences through which they can better understand the world. Of course, neither planet is known for its subtlety, leading to impulse decisions and sudden callings. You may be pulled in many directions, constantly rebooting your career, ever-seeking something you can’t quite name. So long as you can take care of yourself along the way, you’re guaranteed an unprecedented life.

Jupiter blasts open Neptune’s floodgates, making you a living portal for spiritual, creative, and mystical possibility. But where does that leave you, as a human being with a body? In his Complete Astrology, Oken warns of a “dream world which often results in rude awakenings.” Look to challenging aspects to show the breaking points between reality and fantasy, sobriety and dissolution, identity and erasure. No artistic power is worth losing your sense of self.

The desire to expand beyond all that has been before reaches karmic heights with these two. Life moves, big decisions, and grand callings have a fated feeling, making everything you do feel like a Felicity season finale — there’s always a dramatic choice. These two may inspire messiah and martyr complexes, so you’ll have to pay attention to what’s actually the stroke of destiny, and when you’re just creating a drama in your head.

Thursday (Thor’s day) belongs to Jupiter; it’s the perfect moment to bring your week’s projects to completion and look ahead to the adventures of the weekend. Let the thunder rumble on Thursday, so that on Friday, Venus’s day, you can delight and indulge. Because it takes Jupiter about a year or so (with retrogrades) to move through each sign, it acts as a sort of cosmic trend forecaster for culture, and gives your personal chart a twelve-year cycle of personal development which you can track. Currently, Jupiter is finishing its 2021-2022 residency in Pisces, bringing to a close the themes of the last decade or so, before launching a new age of heroes in Aries. Welcome to an all-new decade…

What shape should Jupiter take for you? The planet’s more Piscean attributes manifest in many wise masters of pop culture, including Qui-Gon Jinn, Obi Wan Kenobi and Yoda; The Last Airbender’s Guru Pathik; the Wizard of Shazam! comics; Yubaba’s kindly sister Zeniba in Spirited Away; and Grams on Charmed. Meanwhile, the booming Sagittarian shows up as Chris Hemsworth’s belligerent, beefcake Thor; the X-Men’s grand diva Storm; Bette Davis’s Margo Channing in All About Eve; and Faye Dunaway’s Diana Christensen in Network. Channel Jupiter’s archetypes when you’re ready to stand on the mountain and call forth thunder, when you want to declare your talents to the world, or commit them to a higher service. To get out of your head and into the big picture, there’s only one planet to call on.