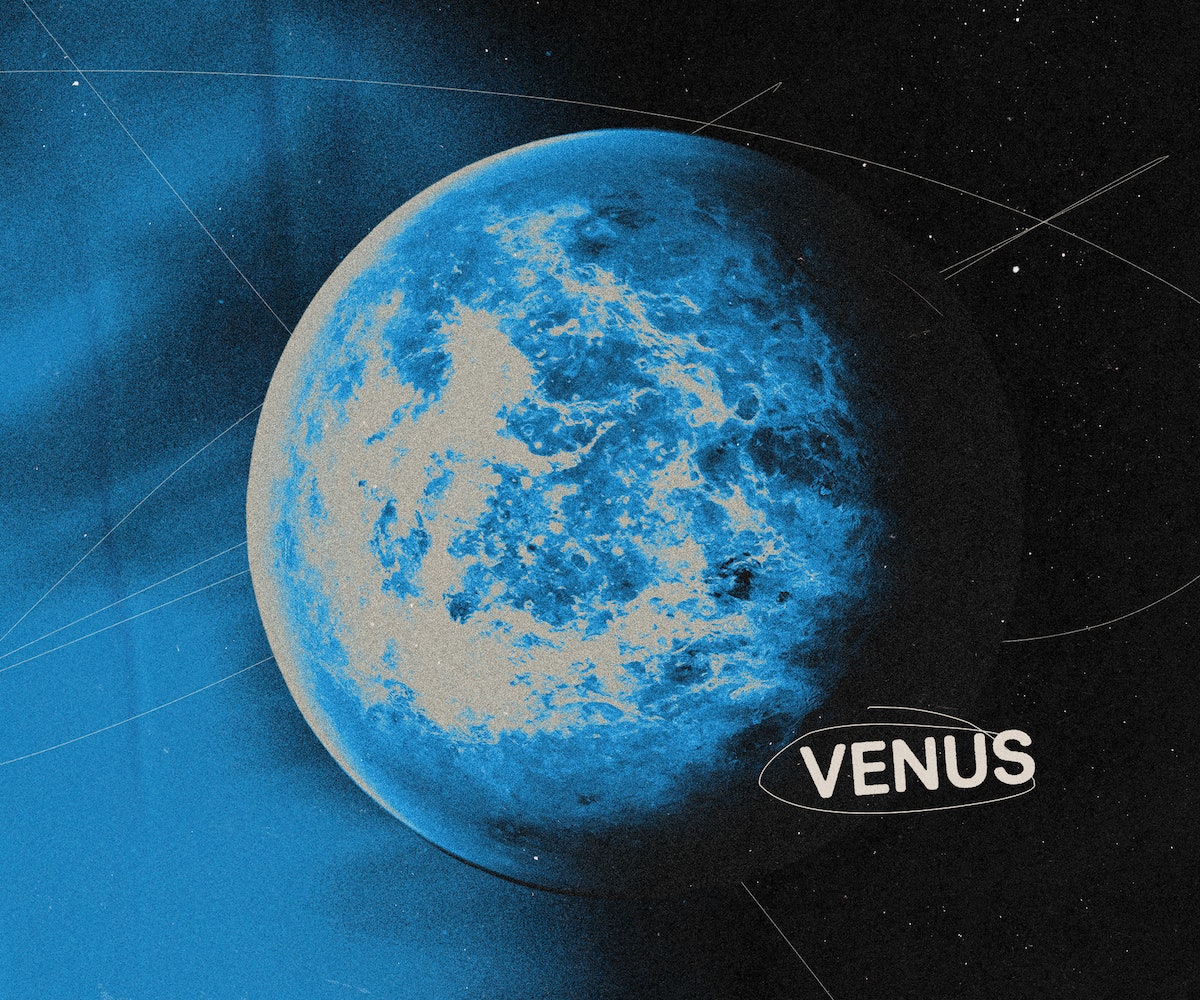 Your birth chart is an epic saga, its planets and asteroids the characters caught up in the conflict. Your rising sign sets the story in motion, your sun becomes the hero. Who, then, but Venus, can claim the prize roles of princess, seductress, sorceress, grand dame, and wizened hag? Look to the high femme of the cosmos for all things beautiful, bountiful, and external, in life and romance. In your chart, Venus reveals the bliss (and savagery) of falling in love, and the power of connection and creation. Consult our guide below for more on your inner enchantress.

The sun and moon are indeed our most personal planets, embodying our immediate needs, desires, and histories. But who’s going to bring us out into the world to meet future friends, mates, benefactors, and collaborators? Enter Venus, the archetype which delivers our gifts and talents to the people. Wherever Venus lands in your chart is the equivalent of Cinderella turning up at the ball: This is where you debut, where you’re seen and adored, where your gifts launch you into new domains of power and pleasure. If, for example, you have Venus in Cancer in the twelfth house of pain and processing, you may shine as a healer of the suffering; with Venus in Sagittarius in the second house of self worth, you may be a Parker Posey-level bon vivant, who lives through their style.

Of course, Venus is Aphrodite, goddess of beauty, who excels in the art of form, of perfecting shape, symmetry, and aesthetics. Her ruling domains are in Taurus, the sign of physical splendor, and Libra, the sign of social ascension. Venus loves the arts: both in the invocation of the muses, and in the fabulous party when the work is done. The Orphic Hymn to Venus calls to the “heav’nly, illustrious, laughter-loving queen…mother of loves, whom banquetings delight…prolific, most-desir’d, life-giving, kind.” This planet is served through socializing, those new encounters which could change your life forever. Venus’s placement in your chart will indicate how you connect with others: A Venus in Aries in the seventh house of public visibility will need their partners to affirm their independence; Venus in Gemini in the third house of daily life will be the neighborhood yente, constantly in dialogue with all the neighborhood wives.

Of course, it’s not all flowers and rainbows. Nine months out of the year, Venus rises before the sun, making her the morningstar, ruling from Lucifer’s domain. She is the goddess Inanna, descending into the underworld to face her sister, the dark majesty Ereshkigal. She is the bloody mistress of battle, whom men point their swords to, the cruel beauty who cuts others down. Look to the shadow side of Venus in your chart, and to the archetypes she may embody: the wronged Medea, gleefully seeking vengeance on her deadbeat lover Jason; the gloomy Persephone, at home both as a maiden of the flowers and the ice queen of hell; Galadriel, both beautiful and terrifying; wrathful Kali; wise Bast; and whoever else calls out to you from beneath the surface. In The Astrology of Fate, Liz Greene writes that “the collision with the dark realm is an exposure to power battles, manipulations, greeds, vendettas, and oppressions…In this dark landscape we meet the Gorgon raging, the unfeeling ice-man withdrawing, the terrible mother and the castrated son, the spider or scorpion which eats its mate after the act of love.” After all, everyone knows that the best love songs are about pain. Why not go all the way in?

VENUS & THE OTHER PLANETS

Look to Venus’s interactions with other planets for insight into your ideal “debut,” boons and challenges with relationships, styles of creative release, and the destined form you’re supposed to inhabit. Difficult aspects to Venus may force a reckoning with excess and financial overindulgence, or reveal the ways we sabotage ourselves in the arena of love. Oy.

Here’s how connections to other planets play out for Venus: through conjunctions (immediate and intense alignment); trines (60 degree, collaborative angle); squares (90 degree challenge from a “backseat driver”); and oppositions (180 degree confrontation, or faceoff). Remember that harsher aspects, like squares and oppositions, often lead to growth, change, and metamorphosis; rarely is there such a thing as a “cursed” placement. And, as Alan Oken warns in his Complete Astrology, “a ‘fine’ aspect does not necessarily make a fine person.”

Because of Venus’s immediate proximity to the sun, the two bodies can only be 48 degrees apart at maximum. Look to their positions in consecutive signs for insight into your identity: for example, an Aries sun with a Venus in Pisces will make for a verse lover indeed. A direct conjunction between the sun and Venus is an immediate bridge between inner direction and embodied style, between who we are inside and how we’re seen by the wider world.

A connection between two divine inner feminine archetypes, like Cinderella meeting her fairy godmother, or Buffy encountering the First Slayer. When harmoniously bonded, Venus can share with the world the empathic and elemental drives of the moon, a direct gate for our inner poetess to take form. But clashes, especially in the form of oppositions, force social obligations in conflict with our inner desires, like Cher Horowitz forcing Ty to be someone she’s not. The femme planets will force a reconciliation between the true you, and the one the world sees.

These two can’t depart farther from each other than 72 degrees, and tend to work well together, uniting aesthetic presentation with what’s being communicated. A conjunction could endow you with a cogent voice and great oratory talents, or render you a motormouth with no measure of tact.

Venus symbolizes our divine feminine, the star is who is received and worshiped. Mars, meanwhile, embodying the active masculine, hunts for what it wants like a wolf. We all carry the drives to both create and destroy, to consume and be devoured. When Mars and Venus are conjunct, look for an over-intensity of passions which may need some balancing out. In more challenging aspects, the two reveal a complicated (and likely fascinating!) relational landscape, where you may want to be held and loved in some arenas, and set free to conquer in others. Nobody said you can’t contain multitudes!

When Venus is paired with the planet of light and expansion, it’s time for oysters, champagne, and solos on the baby grand. Venus and Jupiter know how to have a good time — a rare and essential gift — but oppositions can reveal when the party has gone too big, too far, too fast. Squares, meanwhile, likely reveal the ways we use material excess to cover for deeper problems, a Queen of Versailles syndrome, which, if not examined, will likely end in financial ruin. It’s not that you should shut down your god-given joie de vivre; just make sure you can afford the cab fare home at the end of the night.

Ideally, when the two planets of form unite, we’re in for a My Fair Lady makeover, in which the wise mentor Saturn helps Venus become her best self. Saturn may show up as an older lover, the ancient vampire who takes your virginity, or the grad-school student who calls you by his name. But of all the planets, Saturn strains the most to have a good time, and will often try to curb Venus’s flair for life and color. Sometimes, this lesson in balance can be essential to long-term success. But often, Saturn is a figure of authority who must be overcome to assert our right to beauty, love, and decadence. Such clashes will, if triumphed, forge a true creator from a shallow consumer.

Uranus is the planet of upheaval and chaos, which acts through cataclysms, crashes, and eureka moments. When paired with Venus, it will direct your creativity towards new and radical vistas, and lead you to experimental romantic arrangements. Traditional long-term relationships won’t be easy with these placements; Uranus longs for new jolts of excitement. Look to Nelly Furtado, who can easily flip from cliff girl to promiscuous, as a metamorphic model.

Venus thrives in the water, emerging from the seafoam as Aphrodite, or from the lotus as Lakshmi. Neptune, the planet of collective empathy and imagination, takes Venus’s artistic and relational powers to the global level. Contact between these two can blast open an endless imagination, and lead you to a feeling of cosmic love. And yet, with Neptune, the price of fantasy is steep, and can result in a “someday my prince will come” complex. Love addiction can be as deadly as any other.

In The Astrology of Fate, Liz Greene describes this match as “transformative, deepening, numinous, ecstatic, and full of meaning and richness; there is usually a sense of fatality about it.” Relationships formed at the karmic gate will indeed purge and recreate all that came before: sometimes, it leads to new hope and possibility, as with Carol and Therese; otherwise, it’s Buffy and Spike, demolishing their lives in the lovemaking.

Spike: “Great love is wild and passionate and dangerous. It burns and consumes—

Buffy: “Until there’s nothing left!”

Once it starts it can’t stop. Let that manic night of art-making, or love-making, change your life. It’s not like you have a choice in the matter.

In terms of intention, altar work, and active channeling, Venus is a blast to work with. Her day is Friday, when you should be ditching work, getting your nails done, and hitting the town. On Friday nights, Jews around the world welcome the Sabbath Bride, an avatar of holy feminine sanctity, to their tables. Before the Sabbath, it’s customary to clean and beautify the house to receive her; indeed, if you’re asking Venus for new love and friendship, or for artistic inspiration, you better make sure you have a nice place for her to visit. To show Venus love, adorn yourself and your dwellings in fragrances, jewels, and oils. When you make out with a handsome stranger on the dancefloor, raise your gin and tonic to her honor. As you follow Venus’s movements through your chart, notice which areas she’s perking up, and see how you can bring in light, beauty, and inspiration.

NEXT UP
Astrology
Your Natal Mercury Placement In Astrology, Explained
Astrology
How to Use Astrology to Access Past Lives
Astrology
Your February 2023 Horoscope Is A Breath Of Fresh Air
Astrology
Get To Know Aquarius, The Certified Freak Of The Zodiac
Style + Culture, delivered straight to your inbox.