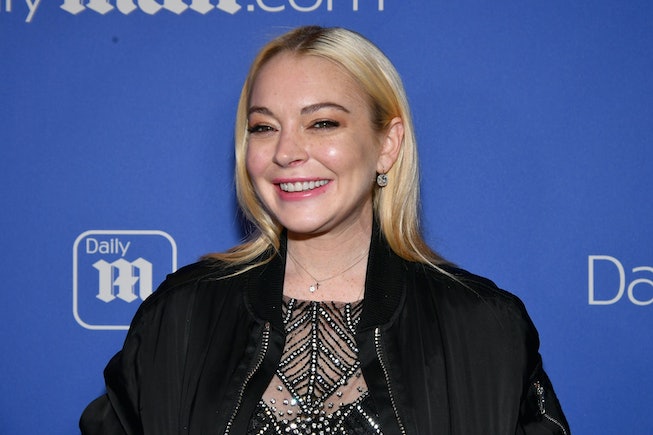 Like everything else from 20 years ago, Lindsay Lohan is back. The star known for generation-defining films like The Parent Trap and Mean Girls, along with an era-defining, paparazzi-exploitation in the ‘00s, not only celebrated her 36th birthday, but tied the knot with her fiancee Bader Shammas.

Lohan announced her engagement to Shammas, a Dubai-based financier who was born in Kuwait and attended college in Florida before working for the UAE, in November 2021. “My love. My life. My family. My future,” she posted on Instagram with some very cute, non-staged engagement pics.

“I am the luckiest woman in the world,” Lohan wrote in an Instagram post over the weekend. “You found me and knew that I wanted to find happiness and grace, all at the same time. I am stunned that you are my husband. My life and my everything.” She added, “Every woman should feel like this everyday.”

Unlike Britney’s star-studded, four-Versace dress wedding, we unfortunately don’t get any inside details on Lohan’s. In February, she told Extra that she would be a “low-key” bride, but didn’t spill any details. “Even on my birthday I want to make sure everyone else is good and then I can be okay,” she said.

How long Lohan has been living in Dubai is a topic of some debate. In 2020, she told Esquire in an interview that she had been living in the UAE for six years, and started regularly going after first visiting in 2008 for the opening of The Atlantis hotel. But in between she had a brief international party girl stint in Mykonos (RIP MTV’s Lohan Beach Club). By 2017, she had famously converted to Islam.

Moving to a country with strict laws around paparazzi makes a lot of sense for a person whose life was upended by constant surveillance, and we couldn’t be happier that Lindsay found peace. In an interview with Vogue, she talked about why she loves Dubai: "I think it's because paparazzi is illegal there,” she said. “I really found that I had a private life, and I could just take time for myself. I decided to stay there because I really learned to appreciate what it is to go, do my work, and then leave and live a normal life."

And along with her marriage, Lohan is back in bigger ways. She’s starring in her first Netflix rom-com Falling for Christmas, marking her first acting role in years, narrated Amazon Prime’s new dating show Love Struck High, and, in the great American tradition of celebrities with podcasts, premiered her The Lohdown on Spotify in April.