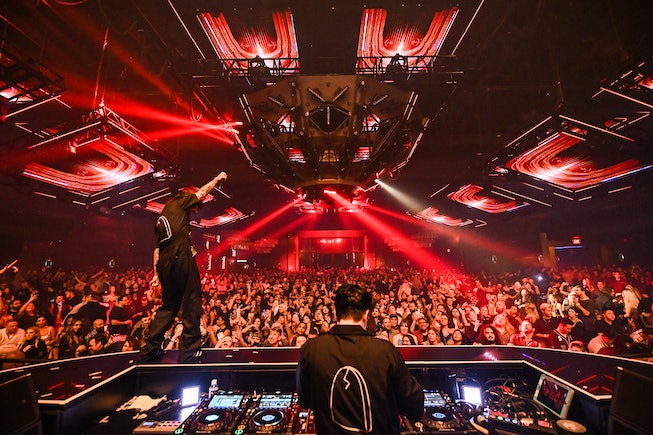 If you plugged your ears, it would have looked like a normal night in Vegas. It was 12:30 a.m. and Zouk, the club located within Resorts World in the heart of the Las Vegas strip, was packed. Ice buckets filled with tequila and Red Bull lingered on every table, and the air was heavy with confetti and occasional clouds of cyro. Most importantly, though, the dance floor was packed. But uncover your ears, and it wasn’t Diplo or Zedd or any other one-named EDM DJ pulsing through the speakers. Instead, it was the unmistakable tenor of Fall Out Boy’s Patrick Stump. Welcome to Emo Nite’s Las Vegas Residency.

In 2014, friends T.J. Petracca and Morgan Freed co-created the idea of Emo Nite off a simple thought: What if bars played pop-punk the way they do hip-hop, house, or pop? Since then, Emo Nite has transformed into a full-fledged phenomenon, complete with weekly events around the world, a successful line of merch (one popular shirt reads “Wake Up, Jerk Off, Cry”), a set at this year’s Coachella, and now, a Vegas residency — a first for the emo genre — at Zouk.

The groundbreaking show debuted in October during the first weekend of the When We Were Young festival, and included guest appearances from Tyson Ritter, 3OH!3, and Martin Johnson of Boys Like Girls. (Past Emo Nite guest stars have included Machine Gun Kelly, Demi Lovato, and Mark Hoppus.) On Thanksgiving Eve, they’ll return for another round, with more shows to come in 2023. Here, Petracca and Freed explain how they made it all happen.

How did your connection with Zouk begin?

T.J. Petracca: We got intro-ed through a friend of ours. He was like, “You should talk to Zouk, they're always down to do different stuff.” I think a lot of the typical promoter groups in Las Vegas, like Tao and Wynn, probably would never entertain an idea to bring Emo Nite into a nightclub. But Resorts World, at least how they've told us, and from what we've seen with their programming, they want to do stuff that caters to everybody. They have a rodeo weekend, and then Bad Bunny, and then Katy Perry.

Morgan Freed: Honestly, it was pretty seamless. I've never been to a club in Las Vegas. So the first time I've ever been in any club setting, that was when we played [in October]. And same thing for Coachella — the first time I'd ever been was when we played. I think at least for me, that was really helpful because I was blind going in. I knew the size of the stage, but that's about it. We were just like, “How do we f*cking make this thing so fun for everybody?”

Petracca: The set was twice as long, so we did have to work on a few new mixes and more visuals. This is also a much more controlled environment technically, in that the video screens and everything live there night after night, run by the same people. So there's a lot less variables for technical difficulties or things to go wrong, which is really nice. The people that run it are super experienced with it and they were really helpful; I think we could've probably shown up with just the music and they can still just make the club look and feel interesting. But we didn't do that. We actually just showed up with a fully done show, provided all the content to them, provided lighting cues and visual cues, and things like that. So that was a little bit different.

Freed: We were really pushing for a later spot during Coachella, just because when it gets dark, you can use lighting as an element. You can use it as something that is dramatic and cool. And since this is inside, we got to do what we wanted to do.

Was the Zouks team surprised when you showed up with visuals and the entire show ready to go?

Freed: We were working with them for quite some time. They know that we're a meticulous team. We give a shit about every single thing that happens. We care about everything that happens surrounding Emo Nite. I don't think that they were surprised. I think there are teams that are more involved, and there are teams that are less involved — we're one of the more involved teams.

Petracca: They were really willing to work with us on a lot of things. For example, usually Vegas nightclubs will charge a higher price for guys and a lower price for girls. And we thought that was kind of bullshit. We reached out and expressed our concerns with it and they were pretty quick to get it fixed. I think it also sparked conversations among their executive team about just doing away with it all together moving forward.

How much did the Vegas of it all play into your planning of the show, particularly in terms of visuals?

Petracca: We have cryo and confetti and pretty nice LED walls at our LA venue. We moved there at the end of last year and it has always been, at least in the past couple of years, one of our goals to elevate the production of our shows. We started out at the Echoplex, which is really just a divey basement venue in LA — we physically and metaphorically hit the ceiling there. We tried to bring in cryo there and it was a disaster. One of the tanks fell over and almost exploded.

Freed: They were pissed.

Petracca: We were building our own LED wall every month. We would rent it, truck it in, and build it, and just try to bring that experience as much as we could. It's been in our mission statement since we came back from the pandemic to try to elevate that sort of experience, because it's something that you don't really get a lot of in rock music and it didn't really seem fair.

How about making the playlist? Is there anything you did that’s new for Vegas?

Petracca: This spring we did two festivals with the Coachella set, and then we did a couple of dates on an actual EDM show. So we switched the playlist up there a little bit. But this is a new project for us. I think even from those two dates in October to November, we'll probably switch up the playlist a little.

Freed: This is a lot different than our normal Emo Nite club night, where we don't play any EDM at all.

Petracca: That’s really just picking a song, pressing play, letting it play through, and then picking the next song. And we have different guest DJs come in and they do that, too. They're usually lead singers from bands and stuff like that. They just pick a song and play it, and then it's onto the next thing. This was like, “How do we boil that experience people are used to with going to a rock club and singing along to the songs that they're familiar with, having a good time with the community, but elevated to a place where it can be in this nightclub with over-the-top production?” And maybe if you're just there because you bought a table and you're going to the club because you're in Vegas for the weekend, you're still going to enjoy it.

Freed: It's like something that's never been done before, so you get complaints on both sides. But I think the second night everybody was ready for it.

Petracca: I really tried to set expectations. I was like, “This is not an Emo Nite.” This is us doing EDM and emo. You're going to have to dress up a little bit. This is a nightclub. I understand it might not be for everybody, and there are tons of other emo parties in Vegas this weekend that you can go to and get that experience if that's what you want to have. But for us, we were like, “What are we going to do? Do a regular Emo Nite at some venue and play all the same songs that everybody heard all day?”

I know at typical Emo Nites, guests are friends from bands that just happen to be around and pop in. How much planning did you have to do for this one?

Freed: We did have to ask them to come beforehand. We had to plan the set.

Petracca: This is also different, because on Saturday when the festival was canceled, we had an opportunity to get more guests. So we ended up adding a few more people on Saturday that weren't planned.

How did that all come together?

Petracca: I don't think I was off the phone the whole day on Saturday. We woke up and they canceled the festival. We had a restaurant downstairs at Resorts World that we took over for the whole weekend. It was just supposed to be a fun hang, come grab a drink thing. We were at one point calling around trying to rent a PA system and put a band on the stage in the restaurant. But once I got downstairs and saw the amount of people that were already lined up for the restaurant and the merch store, I was like, “If we put a band on that stage, it's going to cause a riot and be a safety issue.” I mean, you saw what happened at the Hawthorne Heights and Red Jumpsuit show. I'm happy that they did that for people, but I heard that it was a tense situation and people were climbing on slot machines.

Everybody's heart was in the right place, but then when you actually think about 80,000 people all being disappointed and looking for something to do, and then you do a show at a 300-person venue and you want to do it for free because that seems like the right thing to do. But then it's unregulated and everybody's just f*cking pissed. I think around two, three o'clock, everything shifted for me — from trying to put together a show to trying to get as many guests as we can for tonight's event. We added Neck Deep and State Champs, they were unplanned. Martin from Boys Like Girls and 3OH!3 were planned.

The first night when you stepped on stage, did it feel different than a typical Emo Nite?

Did you feel the need to prove yourselves, as the first emo residency in Las Vegas?

Petracca: I didn't really. I felt really confident in the show that we built and it felt like there was a lot of excitement around it. It's obviously the best weekend to do it, right? Cause there's 80,000 emo kids there per day. And we'll see how it goes in the future when not everybody is ready to listen to emo and pop-punk songs in the club. Maybe that answer will be different.

What learnings will you take away from the first weekend into the ones in November?

Freed: We haven't gotten there. We were just still burnt from this weekend. We've been working all week to make the party on Friday as cool as it can be. Then we have another party on Saturday. I think once the dust settles, we'll be able to focus on how to make November just as cool, if not cooler. Now that we know the venue a little bit, we can navigate a little bit.

Will there be a full-time Emo Nite residency down the road?

Freed: I think we could do a night every week.

Petracca: We're going to do six dates next year, but they're not going to be consecutive. We’re not Elvis, just living there.