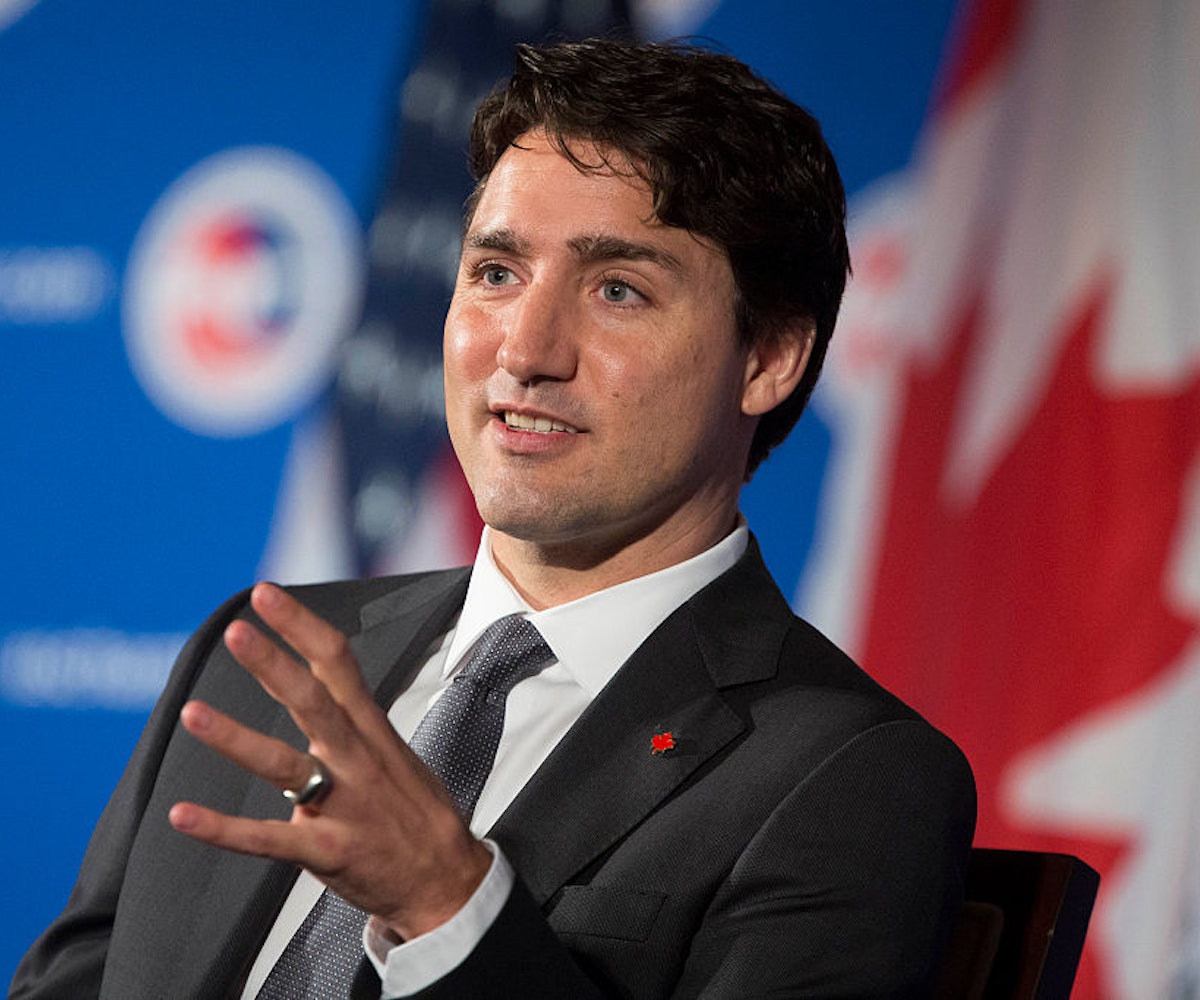 I'm just going to start this out by saying that I am a firm believer in the idea that crushes are a good thing. I am not anti-crush. For example, Harry Styles is a good person to idolize. So is Rihanna. So are Lana Del Rey, Kristen Stewart, Mike Hadreas, Alia Shawkat, Kirsten Dunst, and Gabourey Sidibe. Crush-worthy, all of them! Do you know what kind of person is conspicuously missing from that—admittedly brief—list, though? Do you know what kind of person is almost never, ever crush-worthy? A career politician. That's who. All of which is to say: Your crushes on Justin Trudeau and Emmanuel Macron are dumb. Stop it.

Trudeau first entered America's consciousness in October of 2015, when he ascended into the role of prime minister in Canada. Liberal Trudeau was replacing conservative Stephen Harper, and his victory was celebrated by many left-leaning Americans not only for what it appeared to portend for the upcoming American election (spoiler alert: things did not go well here!) but also because, well, Trudeau is pretty cute. His hair is not quite Styles-levels of floppy perfection, but it's pretty close. And in the more than a year and a half since his election, Trudeau has proved so photogenic that the internet can sometimes seem like nothing more than a repository of images of Trudeau being cute in his rainbow socks or high-fiving a little girl dressed up as Wonder Woman.

Trudeau is not the only left-of-center politician to be enjoying this internet adulation. Since Macron was elected president of France in May, the internet has gone wild over the blue-eyed Frenchman, elevating him to the same level of meme-worship as Trudeau, especially delighting in all the interactions the two have with one another.

And, look, on one level, I get it: Men are fun to objectify! They really are. But good looks are not the equivalent of virtue, and both Trudeau and Macron are not the ideal specimens that so many Americans are making them out to be. Trudeau, for one, has been called "a colossal disappointment for liberals and conservatives alike" with "chauvinist" attitudes toward Canada's Native population. And today a clip featuring Macron went viral on Twitter, in which the French president could be seen saying that problems in Africa are "civilizational," and can be blamed on the fact that women there have "seven or eight children." The more attention you pay, in fact, to both these men, the more you see that their sterling reputations in America are due not to their actions and political stances (of which it's hard to believe that many fawning Americans are cognizant of with regard to any details at all), but rather because of how pretty these two men are.

There's one other not-so-secret aspect to this whole thing. It's not just that Trudeau and Macron are appealing, it's that they're particularly appealing when compared to Donald Trump. In part, of course, Trudeau's and Macron's appeal, when compared to Trump, has to do with their political philosophies; compared to the intellectually and morally bankrupt American president, almost any politician who did not identify as a literal Nazi would seem like a step-up. And make no mistake, Trudeau and Macron are a step-up from Trump, though that hardly makes them adulation-worthy or beyond criticism.

But then, too, Trudeau and Macron are, objectively, better-looking than Trump, who has been the subject of derision as much for his personal appearance (think: all the Cheeto dust-as-skin tone references) as for his disastrous policies. Mocking Trump's appearance might momentarily feel good (even really good!), but it ultimately does nothing to bolster the cause of those who wish to see him removed from office. It's a distraction, and beside the point. Just as Ivanka Trump's good looks are no indicator of having a good character, Donald Trump's unfortunate looks are no indicator of anything other than that he really should consider staying away from the self-tanner.

So it goes with Trudeau and Macron, then. Of course, it's tempting to elevate these attractive men, to romanticize the idea that they and their handsome faces are going to rescue the world from the horror show that is Trump. It's tempting, but it's fatally flawed. No politician, no matter how good-looking, should be idolized in these terms. All career politicians must be criticized and questioned and made accountable for all the people he or she serves. Focusing on their looks—for good or for bad—is only a distraction from what really matters, and the truth is, it's a very seductive distraction. It's a whole lot nicer to just watch Macron talk, and not listen to the racist, ethnocentric words spilling out from his face. But now is not the time for cute photo ops and lists celebrating all the times Trudeau was just sooooo cute. Now is the time to listen to what these leaders are saying, and save our crushes for those who deserve them. Like, have you listened to the new Harry Styles album yet? It's really good.