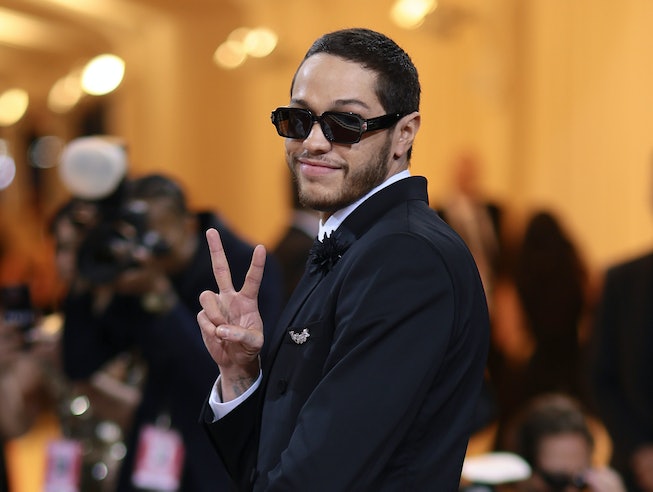 If you feel like you’ve been hearing a lot about Pete Davidson recently, you’re not wrong. He recently made headlines for leaving Saturday Night Live after being a cast member for eight seasons, he has a horror film, Bodies, Bodies, Bodies coming out this August, and has recently entered the fashion world after starting to date über famous person Kim Kardashian. It seems like Kim’s influence is growing even stronger because now, Pete is also adding celebrity beauty influencer to the list of his credentials. Today, he and men’s grooming company Manscaped announced his position as a an official collaborator of the brand with a new commercial.

In the new video, Pete delivers comedic taglines for the brand’s Lawn Mower 4.0” groin and body trimmer. “Suprise your girlfriend,” he says, alluding to Kardashian and his impressive dating history. “Let’s show them how hairless we can be boys,” he jokes in another take. The actor and comedian also says he’s been using the Manscaped product long enough “to where I think it’s time we went into business together.” He closes the commercial with “meet the new face, among other parts, of Manscaped.”

For his beauty debut, Pete wore a black silk robe and was filmed in a bathroom filled with Manscaped products in their signature sleek, black packaging. He sports his now-signature scruffy beard and wore his robe open to show his chest tattoos. While this is his first official venture into the world beauty brands, Pete has long been experimenting with his look, especially with the influence of Kardashian. They recently got matching bleached blonde hairdos (although his hair is dark again in the new commercial) and he even inspired one of Kim’s manicures.

With a new brand deal and a schedule free of Saturday Night Live, expect to see more of Pete and his manscaping in the men’s grooming industry — and no doubt more (dirty) puns to follow. It’s only a matter of time before we’re expecting to see a special edition SKKN By Kim x Manscaped collab.