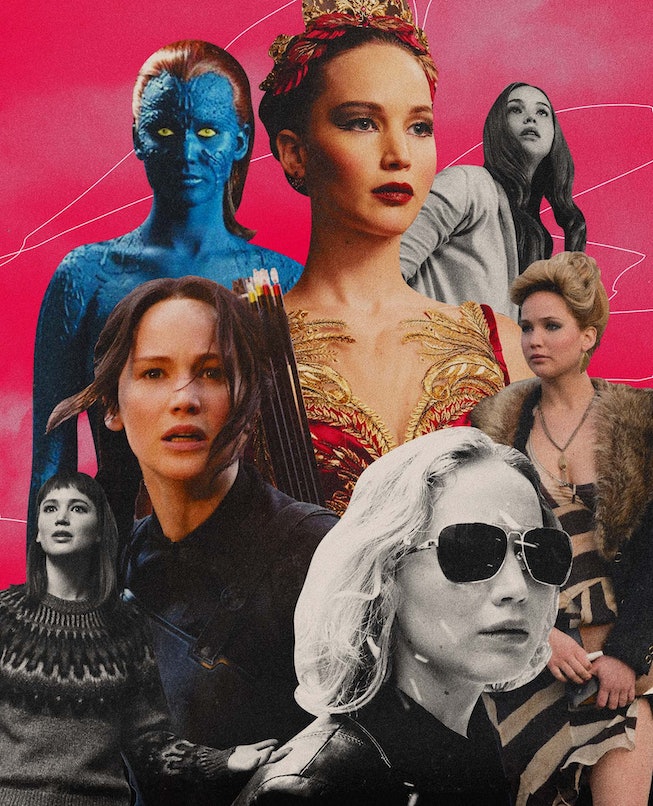 With the arrival of Don't Look Up featuring half of Hollywood, it’s a perfect time to reflect on the best movies with Jennifer Lawrence, a central star of the film and one of Hollywood’s most fascinating actors working today. Catapulted to fame from her work in studio blockbusters, like X-Men and The Hunger Games, to more intimate character-driven stories, like Joy and Winter’s Bone, Lawrence grew up in the guise of Hollywood’s spotlight but seems to have remained untainted by its blinding golden glow.

She quickly became the face of Hollywood’s ‘modern woman’ and a marmite actor in public perception. However you feel, it is undeniable Lawrence has made her mark with a formidable body of work consisting of over a decade on-screen and a performative range that seems limitless. She also has proven herself to possess the rare industry ability where she’s able to disappear for a couple of years and re-emerge as relevant as ever.

Lawrence is also unique for her actor-filmmaker collaboration; she repeatedly stars in a number of films from the same director, see Francis Lawrence (Red Sparrow, The Hunger Games: Catching Fire, and The Hunger Games: Mockingjay Part 1 and Part 2) and David O. Russell (Joy, American Hustle, Silver Linings Playbook). It seems the same is happening with Lawrence and Adam McKay, writer-director of Don’t Look Up, as she is set to star in another upcoming McKay’s film, Bad Blood, as Theranos founder Elizabeth Holmes, once lauded as “the next Steve Jobs.”

Based on the book by former CIA officer Jason Matthews, Red Sparrow sees Lawrence play Dominika Egorova, a woman of multitudes: a devoted daughter, a prima ballerina, a master seductress and an expert at manipulative combat. When an injury ends her ballet career, she finds herself as the newest recruit of a Russian secret intelligence service training young women to become ‘sparrows’ – trained seductresses. Operating at an unforgiving level of violence beneath ruthless bosses, Lawrence imbues Dominika with a dominating determination as sharp as her blonde bob.

Lawrence’s ability to emote with such universal but tempered nuance is an ode to her dazzling acting style. In Red Sparrow, however, she abandons this performance tenor for a daring turn where emotions are a crack in the brave mask Dominika has created. Every one of her moves is utterly unpredictable, a great distraction from the questionable Russian accent.

Signing up for any big-budget franchise is bound to elevate an actor’s career but Lawrence’s first high-profile release, Matthew Vaughn’s superhero film X-Men: First Class (a prequel to the X-Men film series), put her on the world stage as the shape-shifting mutant Mystique. Followed by Bryan Singer’s X-Men: Days of Future Past and X-Men: Apocalypse and Simon Kinberg’s Dark Phoenix, Lawrence’s stint in the X-Men universe is a mixed bag.

Though she brings an emotional depth and more realized character to the shiny franchise, somehow, even though she’s painted bright blue, Lawrence still gets lost amongst the film’s spectacle. Making a name for herself beside Michael Fassbender, Sophie Turner and James McAvoy, Lawrence’s performance derives natural comparison to her role in The Hunger Games franchise and it is the latter that proves more impressive and saves her eight hours in the makeup chair with blue paint and prosthetics.

From a blockbuster franchise to a Sundance award-winner, Lawrence proves her real-life shapeshifting abilities as an actor transitioning from a superhero series to Like Crazy, an intimate romantic drama. Lawrence plays Samantha, a furniture design assistant and the third wheel in Jacob (Anton Yelchin) and Anna’s (Felicity Jones) relationship. Samantha starts dating Jacob while he remains hopelessly in love with Anna. It sounds hopeless for Samantha, and it is, but Lawrence navigates the plight of unreciprocated love with searing earnestness.

Drake Doremus’ intimate relationship study is made even more intriguing with a focus on Lawrence’s Samantha; frustrated that Jacob can’t love her back but afraid to abandon their relationship entirely, her resonance departs from the unlucky lover and, instead, revels in spontaneity. Lawrence showcases an alluring presence for a young actress ducking into the spotlight.

In Joy, Lawrence reunites with director David O. Russell for the third time in a biographical drama portraying housewife-turned-entrepreneur Joy Mangano. The divorced mother of two wrestles with her complicated family situation as she builds a business empire off of the creation of the self-wringing Miracle Mop. Starring opposite Robert De Niro and Bradley Cooper, who both play alternative mentor figures in Joy’s life, Lawrence is a steady and buoyant character that keeps viewers afloat amid a rather messy narrative.

Joy is simultaneously a familial melodrama and a ruthless dynasty journey, but all the while Lawrence’s titular emotion makes Joy an underdog who is easy to root for. She moves with incredible ease before O. Russell’s lens and it’s remarkable to see her deliver a more restrained performance that rests on emotional authenticity. Joy granted Lawrence her fourth Oscar nomination in six years, an impressive feat that landed her the title of the youngest person in history to receive four Oscar nominations. While Joy may not be the most overtly impressive of Lawrence’s filmography, it is a testament to her acting prowess that she makes this film watchable.

Across four years and four films, The Hunger Games films brought Suzanne Collins’ young adult dystopian novel trilogy to life and spanned Lawrence’s astronomical rise. From the first film to the last, Lawrence went from a promising young actor to one of Hollywood’s most sought after stars, marking her (at the time) as the highest-grossing action heroine of all time.

Perhaps the most controversial title in Lawrence’s filmography, Mother! is a disturbing reckoning of layered religious allegories embedded in this psychological horror and absurdly abstract movie. Lawrence plays an unnamed woman, referred to as ‘mother’, renovating a Victorian mansion with her husband (Javier Bardem) into their paradise. Suddenly, an unknown couple arrives on their doorstep and twitching violin strings reveal there are dark energies at play here.

Truthfully, it’s hard to know where to even start unpicking Lawrence’s performance, her grueling tenacity in this role is both elaborate and audacious. Terror brews to unthinkable levels throughout this two-hour psychological horror-thriller and Lawrence is with us all the way, Aronofsky’s focus amid the mounting anguish. Mother! is certainly her most polarizing performance to date, she contorts herself so much it’s a hard role to digest. Nevertheless, her relentlessness in close-ups and long-takes is impressively ubiquitous.

Lawrence delights as Rosalyn ‘life of the party’ Rosenfeld in the con-artist comedy American Hustle. Clothed in a variety of striking looks — from fur-lined coats to silky gowns, red lips matching—rouge nails, and an endless array of fancy hairdos – Lawrence plays the wife of Irving (Christian Bale), one of the central conmen in a late 1970s FBI investigation. Lawrence brings a comedic sensibility to the film’s crime thriller dealings. From drunkenly ruining Irving’s business meetings to nearly causing a house fire after putting metal in a microwave, her presence is addictive.

The latter half of the film is denser in its featuring of Rosalyn as she commands attention with her careless brashness — it feels as though Lawrence lets go of all restraint in this movie and basks in an unfazed character. Performing a dramatic rendition of “Live And Let Die” as she cleans the house, causing mayhem with her harish behavior at Irving’s businessmen black suit parties, and evilly cackling as she kisses Sydney (Amy Adams), the woman her husband has been awfully close to, Lawrence is a shining diamond in American Hustle.

Lawrence’s latest project, a satirical science fiction black comedy, is a bleak disaster movie just in time for Christmas! She stars as Kate Dibiask, an astronomy grad student studying under Dr Randall Mindy (Leonardo DiCaprio) when their research stumbles upon the discovery of a planet-killing asteroid that is on course to collide with Earth in six months. The pair embark on an extensive press tour to warn the population of the encroaching apocalyptic threat.

The film features a hugely impressive star-studded ensemble including Meryl Streep, Cate Blanchett, Jonah Hill, Mark Rylance, Tyler Perry, Timothée Chalamet, Ariana Grande and more! A movie for our times, Don’t Look Up’s climate crisis satire proves a perfect formula for the unpretentious Lawrence to break her acting sabbatical. Lawrence grows the character more hardy and world-weary, weighed down by opportunistic politicians and the impending disaster. Kate’s panic morphs into disbelief, then disgust, as she comes to terms with the reality that her pleading warnings are being overlooked. Mumbling “Wu‐Tang Clan Ain’t Nuthing ta F’ Wit” to herself — with two nose rings and red, short bangs — Lawrence is back to flourishing in the spotlight.

Winter’s Bone was Lawrence’s break-out role and became the first stepping stone in the actor’s journey to be amongst the stars. Based on Daniel Woodrell’s 2006 novel of the same name — which Lawrence’s mother read and encouraged her daughter to audition for — Winter’s Bone sees 20-year-old Lawrence present a performance without pretense as 17-year-old Ree.

Taking place in the rural Ozark Mountains of Missouri, Ree sets out on a desperate quest to locate her missing father in order to evade eviction and provide security for her family. It’s a dream role for an upcoming actor; laden with emotional vulnerability and daring physicality. Her willingness to commit to the gritty, harrowing journey of this protagonist is utterly entrancing as she holds her poise amid this brutal terrain. Lawrence fiercely walks the line of child-like innocence and adult maturity as the adolescent hero of Winter’s Bone, hopeful but hardened, she is exquisite.

Shot when she was 21, the sheer talent Lawrence puts on display in Silver Linings Playbook is phenomenal. In the wake of the film’s release, she took home a Golden Globe, Screen Actors Guild Award and the Academy Award for Best Actress in a Leading Role, becoming the second-youngest Best Actress winner at the age of 22. This unconventional romantic comedy-drama is a culmination of her best attributes and performances; she plays Tiffany, a young widow who is trying to help Pat (Bradley Cooper) piece his life back together after his stay at a psychiatric hospital. Together, in an attempt to get their lives back on track, they enter a dance competition and embark on a rigorous practice regimen.

There’s a bluntness to scenes, that impossibly builds on the tension of the last, resulting in a powerhouse performance from both parties. Their firecracker chemistry is always on the verge of a devastating explosion as they switch between being a perfect match and destroying each other. At her peak, Lawrence shuts down the legendary Robert De Niro in one fell swoop, rattling off football scores in a verbal takedown that is punctuated by a triumphant beer swig. Not many can pull focus in a room that includes De Niro, but Lawrence does it effortlessly.