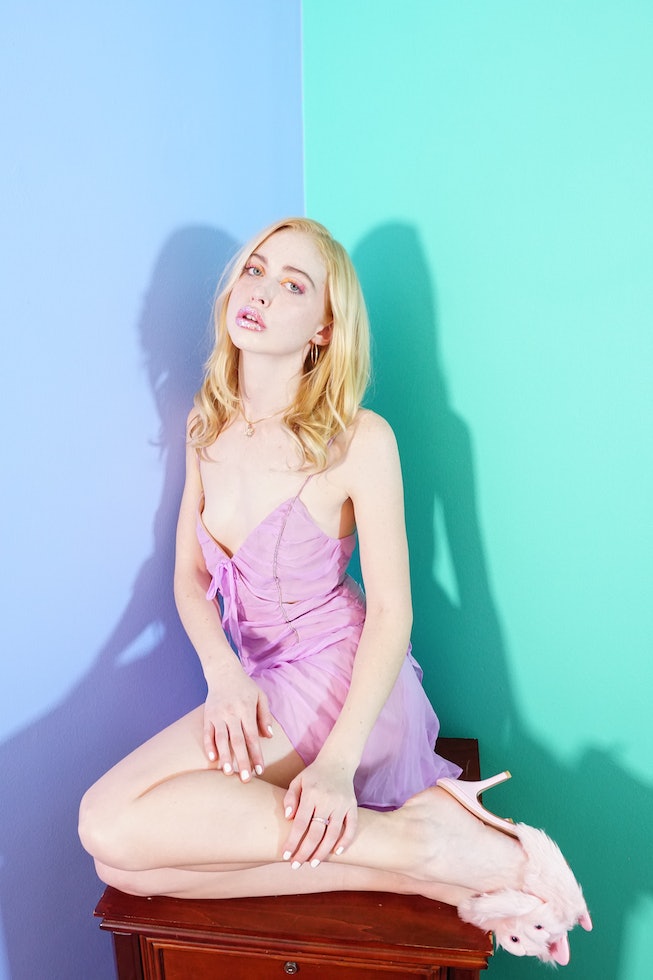 So much of Euphoria’s appeal comes from its stellar ensemble cast. If gratuitous male genitalia, teen drug use, and music video-style party scenes don’t do it for you — although if they don’t, you may be watching the wrong show — then a cast of some of the brightest young things in Hollywood playing off each other will keep you entertained through rollercoaster plot lines. There’s Jacob Elordi’s sociopathic Nate Jacobs, Zendaya’s hazy (and Emmy-winning) Rue, Hunter Schafer’s intense Jules, Alexa Demie’s acidic Maddy, Sydney Sweeney’s hapless Cassie, and Angus Cloud’s honorable Fez — and that’s not even mentioning the other half of the cast.

It’s especially impressive, then, that even among so much talent and charisma, series newcomer Chloe Cherry has managed to steal every scene she’s been in with pitch perfect readings of often improvised lines. Cherry is introduced to viewers in the opening of Euphoria’s second season as Faye, a spacey girl riding in the back of Fez’s car with Rue to a chaotic drug deal, so out of it that she doesn’t even realize it’s New Year’s Eve. In real life, Cherry is an adult film star who prior to being cast on Euphoria, had created her own porn parody imagining a real hookup between Rue and Jules. NYLON caught up with Cherry to discuss getting cast on the show, acting in a mainstream production and what’s next for her:

Can you start with a little bit about your background as a performer?

I guess who I am, is I'm Chloe Cherry. For years now, I've been known as an adult movie star, as well as an Instagram personality. I've had a lot of fans, and I've definitely been recognized for being funny through the years and entertaining through my work. I've definitely had a following through that, that I always just enjoyed so much, because they understood my sense of humor. It’s the most fun thing ever to find people on the internet that have the same sense of humor as you.

And how did your Euphoria casting come about?

Euphoria came about because the director [Sam Levinson] found me on Instagram. He just thought I was funny. Then a casting company had me the audition, so I sent in tapes and stuff. Then when I went in to do the audition, [Sam] was like, "Oh, I was hoping it would be good." And I was, "Wow, that's incredible." When I’m posting things, I'm just doing it to make myself laugh. And it's funny, you never know who's watching.

And you had done a Euphoria parody prior to being on the show.

What was it like to then be on set with those same people and be acting with them?

It was awesome, because I was a huge fan of the show, and I thought they were all amazing. It was just absolutely unreal to see everybody in person. Everybody's so beautiful and so nice, and they all have amazing personalities, and they're all so talented. To see it all close up is just so incredible. It was just so much talent in one room, so much sense of humor and just great sense of fashion. Everyone's really smart and very just, creative and talented. So it was super, super cool to see everyone in person, but it was even cooler that they're such cool people, you know?

Have you kept in touch with anyone from the show?

Yeah, I have. I've kept in touch with Sam and the crew and yeah, some of the other actors. Angus [Cloud] is amazing. He so great. He's so funny. He's not the way that Fez is kind of an intimidating guy. Angus is so nice and he's so funny. He was great to work with.

How did you develop Faye, and where do you see her going?

Which Euphoria character do you relate to the most?

I definitely relate to my character a lot; sometimes in life, things will happen and you're going through change. We really don't know exactly what it is that Faye is running away from. You can tell that whatever is happening to her now, that it definitely doesn't look like it's the best life she could be living. What did she go through before? And I think that we can all relate to times in our life where we've gone through things and just wanted to experience something better, and the way that we feel things and see ourselves grow and change. Definitely some crazy things will happen when you're going through something, but you still really try to hold onto who you are. And maybe you'll learn different things about who you are.

Going from acting in adult films to a show on HBO show — is that something you had hoped or planned to do, or was it more of a surprise to you?

It's funny because when I think about from me before I was an actress of any kind, I as a viewer never really saw difference between different kinds of movies. To me, it was all like, you're all acting, you're all beautiful people. So I guess as the viewer, I never really saw a difference in it, but I guess that was just me, maybe. I'm an actress, just through and through an actress. I've acted for a long time. And it's a different experience, but I would just through and through call myself an actress.

Do you plan to pursue acting? Or maybe a better question, what else is coming up for you in the pipeline?

I like to do a role that is super different from myself. I love being somebody that's completely outside of myself, and putting so much research into a character and just really trying to become something else. I just love it so much. And I just really, really hope that other directors see that in me and are inspired to put me as basically anything. I like that challenge. That's what I'm good at. I think it's what I'm very, very good at. Also, I signed with a modeling agency, Anti-Agency London, and I will be starting to model soon.

Thank you. I'm so glad that people like Faye, just because I put in so much research of not only what is a heroin addict like, but then also just I put so much research [in general]. And it's really interesting what you do researching for a role, because it really could be anything. I can go online or in books, or I can go in real life and research. There's just so much that you can see, and so much that I tried to uncover and so many little things that I just thought would make up this person's mind, and what would make them do things that that was just so great. So I'm just so glad that people, I guess, see her, that people like her. I just am so glad. I've put so much into trying to really create this person that was just confusing but lovable and just really entertaining. So I'm so glad people like her. Thank you so much.

The element of humor that you mentioned definitely comes through with Faye.

Yes, thank you. It's funny, a lot of those lines, like the line of, "You're probably eating that ginger's ass for oxy’s," that I improved. Sometimes in the scenes Sam would be like, "Okay, just say whatever you want." Because he just wanted to see if I would say something funny. And that was one of them that he kept in there.

The original, it was supposed to be something else. But then I just thought that referring to Fez as a ginger was so hilarious and so out of left field, and so deeply showed how much my character didn't know who she was with. I was really glad that people liked that one.

Have you noticed a lot of new fans reaching out to you or following your social media?

Yeah, there's been a lot of people coming to my page. It's been incredible, because so many people are saying, "I love you. You're amazing." And it just makes me so happy. Like, "Thank you. I love you guys too, each and every one of you so much." I'm just so happy to make people happy. I'm so glad that people like Faye. It makes me so happy.

Euphoria is currently airing on HBO on Sunday’s at 9PM EST.