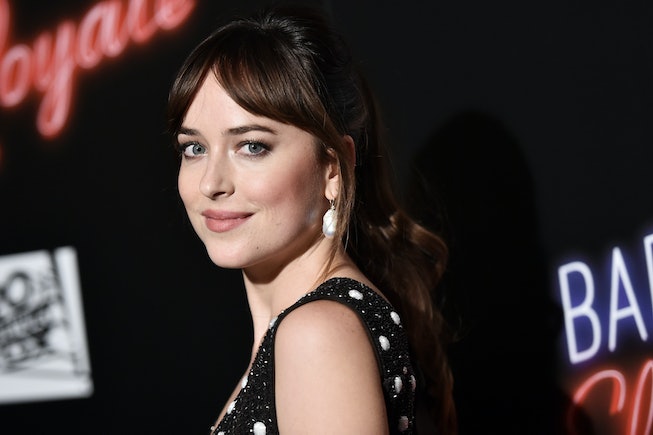 Right now, Dakota Johnson is busy promoting her latest film, the Cooper Raiff Sundance darling Cha Cha Real Smooth, (which she produced and stars in), and very soon, she’ll be promoting her new Netflix release, the film adaptation of Jane Austen’s final novel before her death, Persuasion. But lest we never forget about where Miss Johnson first came to be a household name — in the arms (read: sex chamber) of one Christian Grey, in the insanely popular Fifty Shades of Grey trilogy.

It’s been seven years since Johnson debuted as Anastasia Steele (and four since she laid the role to rest), but already, the world feels like a much different place — particularly with regard to discussions around sex in film. It’s for that reason, in fact, that Johnson doesn’t think her claim-to-fame movies could be made today. When asked, in a recent Vanity Fair cover story, whether she thinks Fifty Shades could get made in today’s political climate, Johnson, answered, “No. Probably not.”

That’s not to say that Johnson doesn’t think the movies should be made though. Her own thoughts on the matter are different. Immediately after that, the actress added, “But what’s wrong with them? It’s about a specific sexual dynamic that is really real for a lot of people.”

Looking back on her entire experience filming that trilogy, Johnson seems to have rather mixed feelings. On one hand, she (rightfully) credits the movie for being “great for [her and co-star Jamie Dornan’s respective] careers.” But she also remembers the experience being “so, so weird.”

For what it’s worth, Johnson seemed to have been really interested in doing the films at first. “I’m a sexual person, and when I’m interested in something, I want to know so much about it. That’s why I did those big naked movies,” she admitted to Vanity Fair. Unfortunately, the experience wasn’t exactly what she was hoping for. “I signed up to do a very different version of the film [than] we ended up making.”

One of the key problems was, rather ironically, with the author of the original books: E. L. James, who goes by Erika. According to Johnson, Erika “had a lot of creative control, all day, every day, and she just demanded that certain things happened [in the film adaptation].” And while the team had reached a collective agreement at one point, eventually, original Christian Grey star Charlie Hunnam was forced to pull out, and Erika was reportedly so upset that she scrapped the script.

Alas, Johnson, already locked into a three-movie contract, kept going. “I was young. I was 23… It just became something crazy,” she told VF. “There were a lot of different disagreements. I haven’t been able to talk about this truthfully ever, because you want to promote a movie the right way, and I’m proud of what we made ultimately, and everything turns out the way it’s supposed to. But it was tricky.”

With stories like this, it’s understandable that Johnson now feels differently about her choice to get involved with this “big naked movies” franchise in the first place. Nevertheless, the actress still isn’t looking back at this time of her life with any particular scorn. “I don’t think it’s a matter of regret,” she said. “If I had known at the time that’s what it was going to be like, I don’t think anyone would’ve done it. It would’ve been like, ‘Oh, this is psychotic.’ But no, I don’t regret it.”

Besides, it wasn’t all bad. “There are things that I still cannot say because I don’t want to hurt anyone’s career and I don’t want to damage anybody’s reputation,” Johnson told Vanity Fair. “But both Jamie and I were treated really well. Erika is a very nice woman, and she was always kind to me and I am grateful she wanted me to be in those movies.” Well, there you have it.