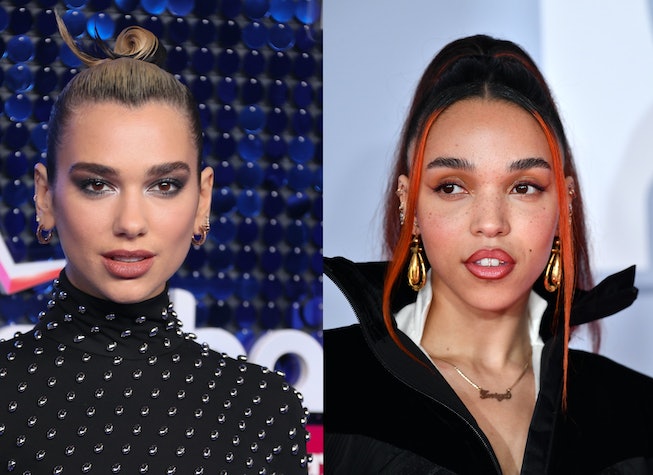 "Yaaaa don't wanna miss this shiiiiiiiiiit" is how Dua Lipa recently described a "very special performance" that will be a part of her upcoming Studio 2054 disco-themed virtual concert. And when that "very special performance" involves the otherworldly talented FKA twigs...well, she's absolutely right. I definitely don't wanna miss this shit — and for what it's worth, I'll make sure I won't. Now, has anyone seen my credit card?

Slated to take place on Friday, November 27th (Black Friday, for all you shopping fiends), the Studio 2054 virtual concert follows the March release of Dua Lipa's critically acclaimed sophomore album Future Nostalgia and the August release of the Blessed Madonna-produced remix album Club Future Nostalgia. Though Dua was originally meant to embark on the accompanying Future Nostalgia Tour this spring and summer, she was forced to postpone it until January 2021 (at the earliest) due to the ongoing COVID-19 pandemic — making this "exclusive online performance" the singer's first real opportunity to show the world how she can translate the upbeat disco sensibility of her most successful record to a live setting.

On her site, where you can currently buy tickets, the show is described as Dua's "kaleidoscopic rocket fuelled journey through time, space, mirrorballs, roller discos, bucket hats, belting beats, throbbing basslines, and an absolute slam dunk of the best of times in global club culture throughout the decades." More "live movie than regular live show," Studio 2054 is rumored to be "an electrifying experience that sees Dua sing, dance, ride on the rhythm, walk the ballroom and downright own the dancefloor with an interstellar cast of guest stars, surprise performers, acrobats, and artists."

So far, FKA twigs is the only guest star that has been announced. And while there is no word yet on what to expect from her appearance during the performance — have the two recorded a new song that they will debut? Or will she just be joining as a glorified backup dancer a lá the Usher-fronted Prince tribute during January's Grammy ceremony (which literally feels like a complete lifetime ago) — we can still get excited about the potential of a Dua Lipa x FKA twigs meet-up. I mean, can anyone say, legends link up?

Check out Dua Lipa's announcement below.