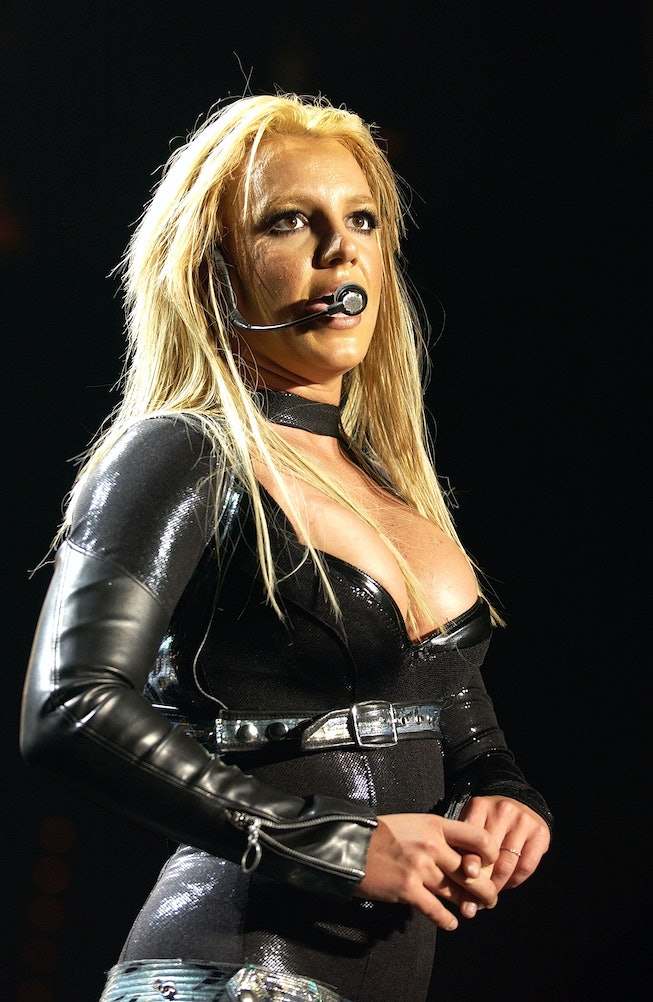 Trying to gauge how exactly Britney Spears feels about Framing Britney Spears and the many other new and upcoming documentaries about her life, has proven to be a tricky task. The legendary pop star, who in recent years has become notoriously private with her personal affairs, rarely speaks directly to the media and mostly communicates through her Instagram account.

However, since the documentary’s release in early February, and as her own conservatorship case has moved to the forefront of public discourse, the star has slowly become more vocal about the films and what she thinks about them. (There is, however, a subset of Spears fans that believe she isn’t in control of her social media at all, and that it’s being controlled by her team.)

Below, we attempted to round up everything that Spears has reportedly said about the documentaries, according to her own Instagram captions and “insider sources” — so it may be wise to take some of these with a moderate amount of salt.

Spears is “aware” of documentary but hasn’t watched it, according to sources

On February 8, just a few days after Framing Britney Spears’ premiere, Entertainment Weekly reported that popstar was “aware” of the documentary, but hadn’t watched it.

"She's always made aware of any important new releases that pertain to her life and career, and this was no different," the source told EW. "She hasn't seen the documentary because she never likes to focus on what others say about her.”

Page Six seemed to report the same a day later on February 9.

On February 9, Spears appeared to make her first public statement about the bombshell documentary, albeit indirectly. Sharing a video of her performing “Toxic” during her Las Vegas residency, she went on to write on her social media that she was taking time off from performing to “learn and be a normal person….. I love simply enjoying the basics of every day life !!!!”

She ended her post by writing vaguely: “Each person has their story and their take on other people’s stories !!!! We all have so many different bright beautiful lives [...] Remember, no matter what we think we know about a person's life it is nothing compared to the actual person living behind the lens!!!” It was paired alongside a smattering of flower and star emojis.

The documentary has Spears feeling “hopeful,” according to a close source

That same night, February 9, Page Six reported that the documentary had Spears feeling “emotional” and “hopeful she will finally be freed from the vice-like grip of her father,” citing a source close to the star.

Though the source didn’t outright confirm whether she’d seen the entire documentary, they seemed to imply that she had watched it by telling Page Six: “There are parts of the film that were too hard and emotional for her to watch — the scenes that describe the most difficult times of her life, the relentless media circus and the harsh focus on her as a young mother. But, she feels, for the first time in many years, that people are on her side and things will get better for her.”

They added that she was very “humbled” and “grateful” for the public outpouring of support she received from celebrities like Sarah Jessica Parker.

Page Six went on to state that Spears was working on her own documentary about her own life with a “top female filmmaker,” though TMZ later debunked that claim, citing their own source with direct knowledge.

Spears says she “didn’t watch” Framing Britney Spears, but was “embarrassed” by it

Over a month after its release, on March 30, Spears made her first public statement directly addressing the documentary on social media. Posting a video of her twirling to Aerosmith’s “Crazy,” the pop star wrote a long caption about her feelings about the film and the media’s treatment of her.

“My life has always been very speculated ...,” her post began. “It takes a lot of strength to TRUST the universe with your real vulnerability cause I've always been so judged... insulted... and embarrassed by the media... and I still am till this day.”

She went on to state that she “didn't watch the documentary but from what I did see of it I was embarrassed by the light they put me in ... I cried for two weeks and well .... I still cry sometimes !!!!”

She ends the post by saying she’s here to “pass on kindness!!!!”

On May 3, Spears posted her thoughts about the documentaries being made about her as well as the media, seemingly prompted by BBC’s documentary about her life, The Battle for Britney: Fans, Cash and a Conservatorship, which aired on May 1.

In her post, which she paired with a video of her spinning in her home, she began by saying, “Geez !!!! 2021 is definitely way better than 2020 but I never knew it was gonna be like THIS. So many documentaries about me this year with other people's takes on my life ... what can I say … I’m deeply flattered !!!!”

She went on to call the documentaries “hypocritical” as the films seem to criticize the media and then “do the same thing ?????” seemingly alluding to the way the host of upcoming documentaries are again attempting to use her story and image for profit.

Spears added that, while she has had some “pretty tough times” in her life, she’s also had plenty of positive ones. “I mean … isn't this supposed to be a business and society about THE FUTURE ????,” she writes. “Why highlight the most negative and traumatizing times in my life from forever ago ???? I mean DAMN.”

She ended her note by stating she doesn’t “actually talk to Billy B” at all, seemingly in reference to her former ex-makeup artist Billy Brasfield, who claimed that Spears isn’t controlling her own social media accounts. “I’m honestly very confused !!! This is my Instagram !!!!,” she wrote.

At least it seems she’s finally gotten around to watching Framing Britney Spears. She signed off on the post by also responding to the paparazzi who was interviewed in the documentary, writing: “PSSSSS no paparazzi guy … I didn’t want you and your crew following me around !!!!”

Months later, Britney Spears is still not happy with the latest slew of documentaries about her and let the world know in her latest Instagram caption which she posted, deleted, and then re-posted with edited text on Tuesday.

Though she doesn’t call out the documentary by name, a source told Page Six that the film in reference is CNN’s Toxic: Britney Spears' Battle For Freedom, which aired on September 26.

“I really try to disassociate myself from the drama !!!” she continued in the post which remained unchanged, and is dotted with exasperated, rolling eye emojis. “Number one ... that's the past !!! Number two ... can the dialogue get any classier ??? Number three ... wow they used the most beautiful footage of me in the world !!! What can I say .. the EFFORT on their part !!!”

In the days surrounding the hearing a number of new documentaries about Britney’s life and conservatorship have been released including CNN’s film, Netflix’s Britney Vs. Spears, and the New York Times’ exposé follow-up to Framing Britney Spears.

Editors note: This article was updated on September 28, 2021 with new quotes from Britney Spears.

NEXT UP
Culture
A Britney Spears-Inspired Musical Is Coming To Broadway
Culture
Not One, But Two BTS Documentaries Are Coming
Entertainment
Taylor Swift Swept The 2022 American Music Awards
Entertainment
Precious Pepala Is Going From TikTok Covers To Her Own Resonant Songs

This article was originally published on May 7, 2021