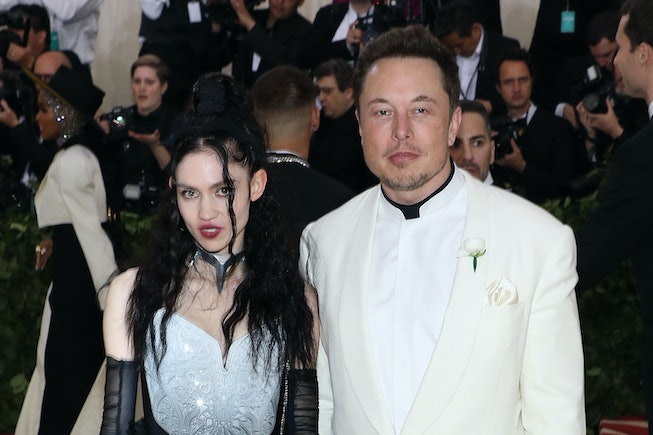 Few things are quite as reliably fascinating as celebrity baby names. For years, A-List superstars have proven that celebrities are not just like us by continuously one-upping each other in some secret game of "Who Can Come Up With The Most Unique Name?" In 2004, Gwyneth Paltrow and Chris Martin named their daughter Apple. Almost a decade later, Kanye West and Kim Kardashian-West chimed in by naming their children North, Saint, Chicago, and Psalm. In between that, supermodels Lucky Blue Smith and Stormi Bree welcomed Gravity Blue Smith into the world. And lest we never forget Raddix Madden, the daughter of Cameron Diaz and Good Charlotte's Benji Madden. Now, yet another celebrity couple has entered the chat: Yesterday, anti-pop singer Grimes gave birth to her first child with partner, Elon Musk. The baby's name? X Æ A-12 Musk. (Don't forget the Musk.)

The name was revealed in a late-night tweet from Musk, who was responding to a tweet that read, "We need the name we literally need it." Just hours before that, the CEO of SpaceX and Tesla was live-tweeting his girlfriend's labor in between debunked rumors about his Tesla vehicles. "A few hours away!" he told one user who requested news on the baby. "Mom & baby all good," he then updated several hours later. The multi-billionaire also used Twitter to reveal that the baby was a boy, though Grimes has previously stated her intentions to let her child decide their own gender when the time was right. "I don’t want to gender them in case that’s not how they feel in their life. I don’t know. I just feel like it doesn’t need to be known," she said during a since-deleted YouTube livestream in February.

Coincidentally, Grimes also used that livestream to hint at the rather interesting nature of her then-future child's name. “I have a name for the baby, but I don’t want to say what it is because everyone I’ve told it hates it, and everyone’s gonna make fun of it,” People quoted her as saying. “But it is, in fact, a genius name, and people just don’t appreciate it yet because it’s too avant-garde.”

Well, if the baby's name is, indeed, X Æ A-12 Musk, "avant-garde" is definitely a word to describe it. As far as pronunciation, there is no official word yet, but according to a tweet, which Musk liked, it's possible that the name could translate to "X Ash Archangel." Either way, the "genius name" isn't an entirely surprising selection for the couple, who have been dating for at least two years after making their public debut at the 2018 Met Gala. After all, this is the same pair that invited Azealia Banks over and left her to fend for herself, leading to some hilarious (and possibly incriminating) text exchanges. (One, about the couple's plan to have a child, has already come true.)

See some pictures of X Æ A-12 Musk below.

NEXT UP
Entertainment
Taylor Swift Swept The 2022 American Music Awards
It Girl
Jessica Henwick Is A Franchise Favorite For A Reason
Entertainment
RM's "Yun" & 9 Other New Songs Out This Week
Entertainment
Caroline Polachek Announces Album ‘Desire, I Want To Turn Into You’