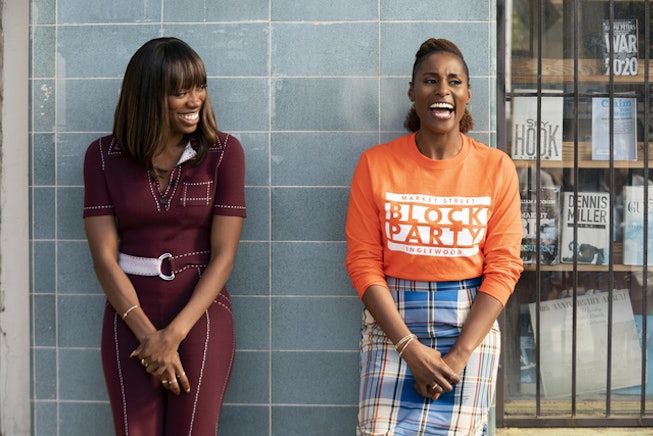 After concluding its fourth (and, in my humble opinion, best) season all the way back in June 2020, the Emmy-winning hit will return to HBO this October. Now, as you queue up HBO Max to begin your annual rewatch, here’s everything we know about the upcoming season:

The fifth season of Insecure premieres in October.

After a long wait — season four of Insecure premiered a year and a half ago; the show was then renewed in May 2020 — the fifth season of Issa Rae’s critically-acclaimed hit will finally premiere on October 24, 2021. The final season will follow in the footsteps of season four and feature more than eight episodes (though exactly how many has yet to be determined).

The final Insecure teaser finds Issa scared of what’s up ahead.

In the final teaser for Insecure, released Thursday, September 2, Issa once again is talking to the voice inside her head — and the mirror. She wishes for a drama-free life before admitting that though she tries not to show it, she’s scared about her future and what’s going to happen. It’s Issa at her most relatable, and a promising hint at the season to come.

This will be the final season of the beloved HBO dramedy.

Sadly, these season five episodes will be the last to bear the Insecure title. HBO announced that the upcoming season would be its last back in January. At the time, Rae told Deadline that she and co-creator Prentice Penny “always planned to tell this story through five seasons.”

“Prentice and I are so grateful that HBO believed in our show from the beginning and kept faith in us to see our vision through the end," she told the online trade publication. “We couldn’t have made it this far without the tremendous support of our audience. I feel blessed beyond measure to bring our characters’ stories to an end, on-screen at least."

All of the main cast is expected to return.

As we prepare to say goodbye to one of the most talented (and attractive) casts on primetime, we can at least look forward to seeing all of our favorites on screen one more time. Issa Rae’s protagonist Issa Dee will, of course, be back, but so will her three best friends: Yvonne Orji’s Molly Carter, Natasha Rothwell’s Kelli Prenny, and Amanda Seales’ Tiffany DuBois.

The boys will also be back, too. So get ready for more of Jay Ellis’ Lawrence Walker, Kendrick Sampson’s Nathan Campbell, Neil Brown Jr.’s Chad Kerr, and Wade Allain-Marcus’ Derek DuBois. After Molly broke up with her former boyfriend Andrew Tan, it’s unclear whether or not Alexander Hodge will return. But with Condola Hayes’ season four finale bombshell presumably guiding a lot of the fifth season drama, we can definitely expect the return of Christina Elmore.

The season will be partially influenced by the COVID-19 pandemic.

Speaking to People in April, Issa Rae said the ongoing pandemic inspired the new episodes. “They're asking themselves, 'Are we going to be okay?',” she told the magazine of Insecure’s characters. “Because so much happened last season in their lives, we thought they would be faced with this question of despair, and that question will motivate them throughout the season.”

Some cool directors are returning.

Scandal’s Kerry Washington is among those tapped to direct an episode. According to a post she shared on Instagram back in February, the Little Fires Everywhere actress will direct the fifth episode of the season, which was written by frequent Insecure scribe Laura Kittrell. This will be Washington’s second time directing for the show; the Emmy winner also directed last season’s standout penultimate episode “Lowkey Trying,” which memorably depicted an epic falling-out between central best-friends Issa and Molly.

Insecure’s fourth season was the show’s most volatile for the friendship shared between Issa and Molly. While the pair have frequently squabbled over the course of the show, in season four, the pair endured their biggest fight yet — in that aforementioned ninth episode, both women agreed that maybe they just didn’t fit into each other’s lives now. And though the finale concluded with the two quite possibly reconciling when they meet up (once again) at their favorite Ethiopian restaurant, showrunner Prentice Penny told Entertainment Weekly that he and the writers weren’t really interested in having the pair “go back to where they were.”

“They’re going to be forever changed by this, forever humbled by this, and hopefully, forever close by this,” he explained. “I don’t think it’s about getting them back to where they were. I think we’re always going to have a version of them having fun together because they’re friends, but I think we want to explore what is that road back like and how is that road different.”

At least Molly’s final season storyline will be good, apparently.

When asked whose storyline she was most excited to share, Rae told People that she was most excited for people to see Molly’s character development in this final batch of episodes. Though Rae refused to spoil any plot details, Prentice Penny did offer some hints when he told EW that one of the questions season five would answer was: “Can Molly find love in a way that she doesn’t have to ruin it for herself and can she start to address the issues she really needs to address?”

We will finally get to answer the question on all our hearts: Are Issa and Lawrence end game?

At the beginning of the fourth season finale, Issa and Lawrence seemed to be living out a textbook fairytale — all hot sex on the couch and sharing takeout while bingeing TV together. For a while, it seemed like the show’s central will-they-or-won’t-they couple might actually be ready to settle down with one another. (Maybe these two crazy kids might work out together after all!) However, in the episode’s final minutes, they’re hit with a crushing blow: Condola, the girl Lawrence had been dating before returning to Issa, is pregnant, the child is Lawrence’s, and she plans to keep it.

Though some fans were quick to assume that this reveal would necessitate a breakup between the couple, Prentice Penny told EW that the status of Issa and Lawrence’s relationship was left “purposefully ambiguous” in the finale and that fans wouldn’t get to know the truth until this new season. Now, with both parties faced with a very complicated decision — Will Issa really be willing to uproot her life to follow Lawrence to San Francisco if he has to father another woman’s child? Will Lawrence even want to stay with Issa if he knows his ex is giving birth to a child that is his? — we will finally get to see if these two really are end game. Buckle up!