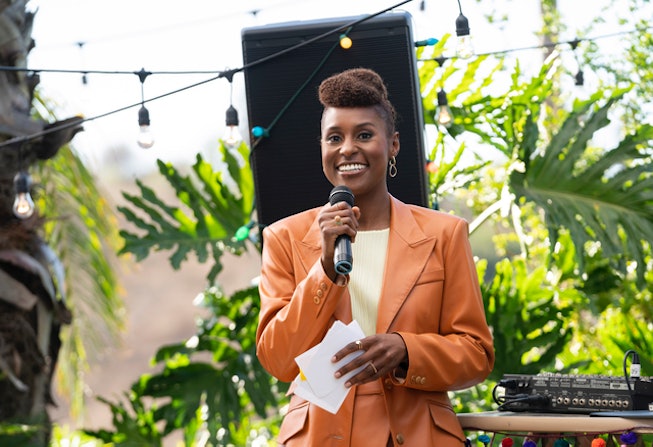 First, some good news: season five of Insecure, which was greenlit by HBO half a year ago back in May 2020, will finally begin production later this month, with a premiere date tentatively set for later this year. (Everything is tentative in the Age of Corona, especially for a show as indebted to filming in Los Angeles as Insecure.)

And now that that's out of the way, here's the bad news: this upcoming fifth season will be Insecure's last, according to a recent announcement by Amy Gravitt, HBO Programming's Executive Vice President.

Today's news comes as a severely disappointing blow, particularly since the HBO comedy's most recent (and briefly delayed) season was arguably its strongest, watching as Issa Dee finally grew up in matters both personal and professional. Of course, this may very well be part of the reason why HBO and Rae have decided to bring the show to its conclusion: After years following Issa (along with her friends Molly, Kelli, and Tiffany) fumble around Los Angeles trying to reach a period of true "adulthood," there may not be much left to explore as Issa Dee leaves her "insecure" era into one of pure confidence, fulfilling employment, and overall comfort. (And great natural hair, too — let's not forget that.)

Speaking on Insecure's forthcoming conclusion, Rae was sure to thank those who have helped bring her vision to life over the past five years. “Prentice and I are so grateful that HBO believed in our show from the beginning and kept faith in us to see our vision through the end," the creator, writer, and lead actress told Deadline. Later, she added, “We always planned to tell this story through five seasons, but we couldn’t have made it this far without the tremendous support of our audience. I feel blessed beyond measure to bring our characters’ stories to an end, on-screen at least."

For her part, Gravitt had nothing but endless praise to bestow upon Rae and Insecure as a whole, saying, "Issa has turned insecurity into an iconic form of comedy. The show is as incisive as it is heartfelt, and it has resonated strongly with its audience because of the deeply personal work that Issa, Prentice, Melina, the cast and the writers have put into it. This talented team has conceived a brilliant final season for Insecure and we look forward to having many more stories to tell with this singular group of collaborators."

On the bright side, at least Insecure will be going out on a relatively high note. Last year, the show finally received a long-awaited Emmy nomination for Outstanding Comedy Series after only receiving one other individual nomination for Rae in Outstanding Lead Actress and two others for Outstanding Cinematography in years prior. Though it failed to nab wins in any of those categories (nor did co-star Yvonne Orji win in Outstanding Supporting Actress, which she was nominated in for the first time), the series did secure its first (and to date, only) Emmy win for Outstanding Single-Camera Picture Editing.

Now, if you don't mind, I'm going to spend the rest of the day crying to the Insecure soundtrack.