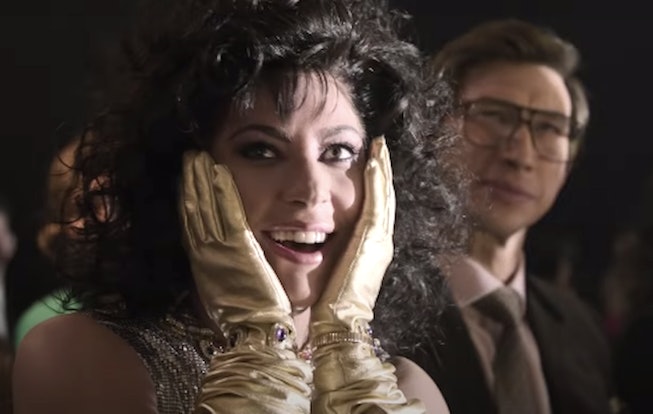 It’s been over a year and a half since Lady Gaga was announced as the star of Ridley Scott’s upcoming film, House of Gucci, about the murder of Maurizio Gucci (better known as the grandson of Guccio Gucci, who founded the Italian luxury fashion house that is now run by Alessandro Michele).

The artist born Stefani Germanotta, an Italian herself (and don’t you forget it), was set to play Maurizio’s ex-wife Patrizia Reggiani, who allegedly tried to arrange the murder. Months later, the cast was filled out with a number of other A-Listers, including Al Pacino as Maurizio’s uncle, Aldo, Jared Leto as his cousin, Paolo, and Adam Driver as Maurizio himself.

Then, in March, in the middle of the workday, Lady Gaga took to Instagram (and Twitter) to offer fans the first sneak peek of her and Driver’s central characters. “Signore e Signora Gucci,” she wrote in the caption, capping it all off with the hashtag #HouseOfGucci.

Reader, I lost my mind.

Here’s everything we know about House Of Gucci so far:

The first House Of Gucci trailers feature Gaga and Driver in their full Italian transformations.

The first full trailer for House Of Gucci, first shared in July, lays out the murderous plot of the fashion film.

The second trailer, released October 28, 2021, show’s Patrizia Reggiani (Gaga) amidst her struggle to ascend to power in the Gucci empire despite the misogyny of the men around her. Both trailers feature Gaga and Driver’s heavy Italian accents, and are worth a full watch:

The looks will be everything.

Set against a snow-capped background that gives off major Aspen Ski Week vibes — all filming is being done in Rome, though, so obviously it’s not — the simple image features the 5’1” Gaga standing next to the 6’2” Driver. Driver wears a pair of large Terry Richardson-esque aviator glasses and has one hand on his hip while the other wraps around Gaga’s shoulder. The pair both offer up sly smirks while gazing affectionately into the camera.

Judging by this picture, the costume design in House of Gucci will be stunning. Much like American Crime Story: The Assassination of Gianni Versace — the Ryan Murphy-created miniseries about the brutal murder of a different Italian fashion legend — House of Gucci promises to immerse viewers in the beautifully gaudy styles that would later become the House signature. In the photo, Gaga’s Patrizia is dressed in all black with tons of gold-accented jewelry. And I mean tons: she wears a huge ring on her finger, and a chunky gold bangle with large pearls around her wrist. Up top, she has on at least two chains, a pearl necklace, and a gold-and-pearl choker. She caps it all off with a pair of gold earrings and a furry white cossack hat. Driver, meanwhile, is outfitted in an utterly luxurious beige cableknit sweater that gives Chris Evans’ similarly-covetable Knives Out sweater a run for its money. Like a true fashion icon, the sweater is tucked into a white snowsuit that’s been tied around his waist. Both actors look incredible.

The plot is based on a wild true story.

While Driver’s smirk seems to express real happiness, Gaga’s, for what it’s worth, looks slightly more insidious. It’s a fittingly nefarious expression for the actress, whose character, need I remind you, was tried and convicted for orchestrating the assassination of her ex-husband. (The real-life Patrizia Reggiani was sentenced to 26 years in prison, but only served 18 thanks to her “good behavior.” She was released less than five years ago, in October 2016.)

The movie is also based on a book — The House of Gucci: A Sensational Story of Murder, Madness, Glamour, and Greed by Sara Gay Forden. Head here for the 10 wildest moments from the book that informed the film.

House Of Gucci will be out later this year.

For now, House of Gucci is set to release later this year on November 24, 2021. But with filming on the production only a month in, and COVID-19 still throwing everything into disarray, who can ever really know what MGM will do in the future? Fingers crossed though. I need this more than air.