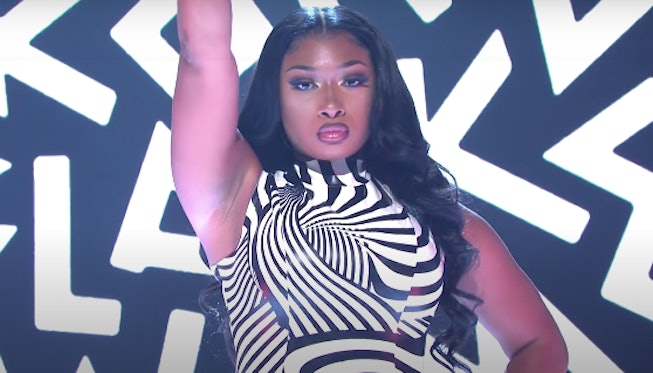 After topping the US Billboard Hot 100 charts twice over the past few months, Megan Thee Stallion continued her Quarantine Era Hot Girl Summer by appearing on Saturday Night Live as the sketch comedy show's first musical guest of season 46. Though the Houston Hottie did not treat fans to the first live performance of her Cardi B-assisted hit "WAP," she did premiere her three-day-old single "Don't Stop," complete with a spirited appearance by collaborator Young Thug. But the real headline-making moment came during the rapper's first performance of the night for "Savage," which she used to make a powerful statement in support of Black Lives Matter.

Dressed in black and white against a trippy, kaleidoscopic background, Megan Thee Stallion was a vision of confidence as she rode the now-familiar "Savage" beat, taking brief breaks to bust out complicated choreography — including a whole section carved out for Beyoncé's world-stopping verse. But about two and a half minutes in, the music stopped and Megan, flanked by four backup dancers on raised platforms, stood up straight and still as the familiar voice of Malcolm X replaced her own. "The most disrespected, unprotected, neglected person in America is the Black woman," he said. Then, "Who taught you to hate the texture of your hair? The color of your skin? The shape of your nose? Who taught you to hate yourself from the top of your head to the soles of your feet?" Later, a clip of activist Tamika Mallory reacting to the news that Breonna Taylor's murderers would not charged with her death could be heard over the 30 Rockefeller Place soundsystem. "Daniel Cameron is no different than the sellout negroes that sold our people into slavery," she said.

Naturally, Megan's statement — particularly her comments about Black women — had a special resonance for anyone who has been following her journey for the past few months. Since landing in the hospital for what was later revealed to be gunshot wounds in both feet, Megan has been mired in a vicious media cycle — from those who accused her of lying about her injury, and later, from those who called her a snitch after she admitted that it was fellow rapper Tory Lanez who shot her during a heated argument. Megan knows better than anyone how necessary it is for the rest of us to step up and protect Black women.

Check out Megan Thee Stallion's performances of "Savage" and "Don't Stop" below.