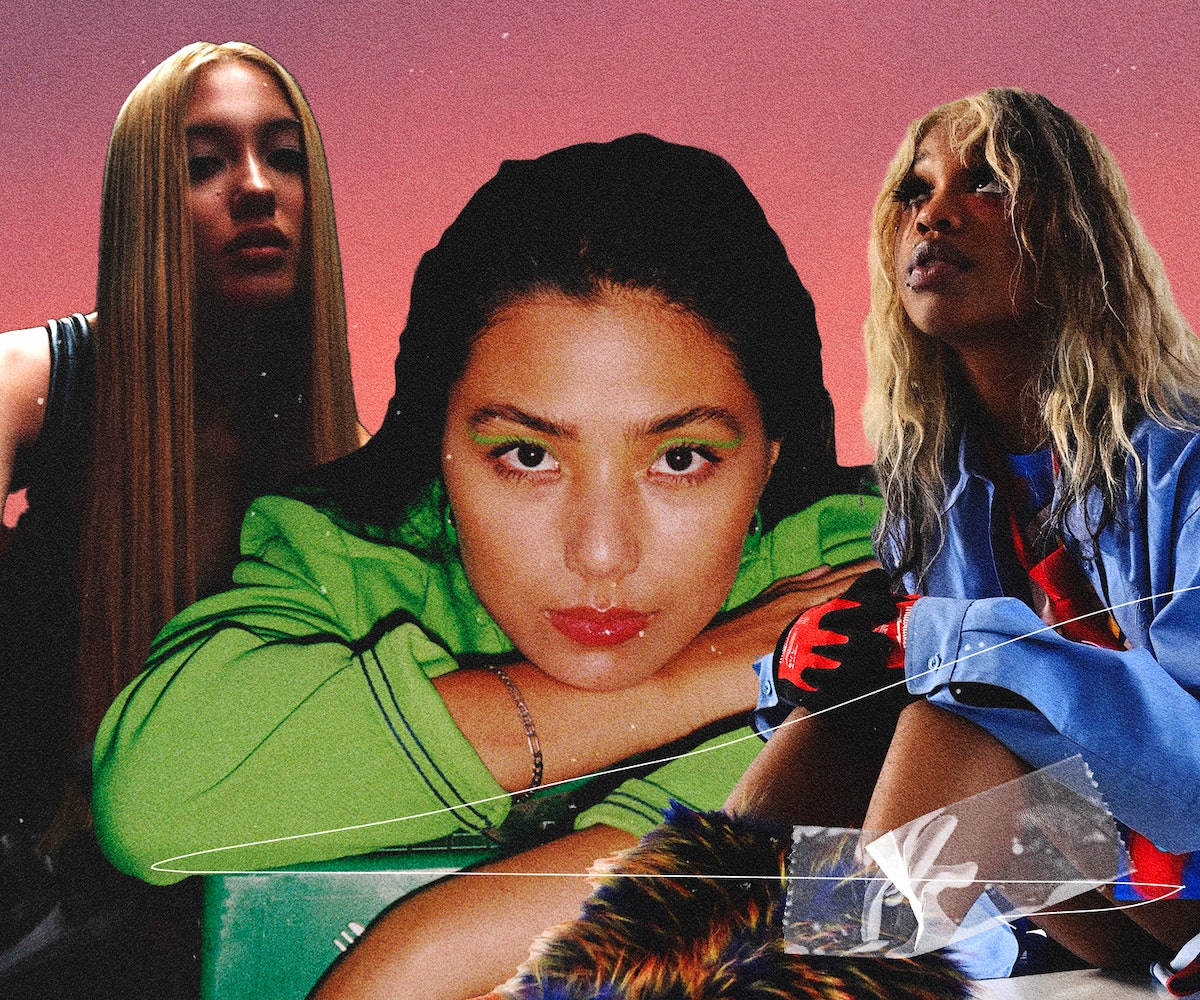 2021 may not have been the triumphant bounce back for music we all hoped for when concerts and festivals were halted due to the rollercoaster of last year, but despite adverse circumstances, artists continued to innovate. Some of the year’s best tracks came from unheralded newcomers like Daine and Gayle, while talents like Mia Joy and Poupie reached wider audiences with the best records of their careers.

Here, NYLON has selected 16 promising artists sure to have a bright future — from a viral Bikini Kill-inspired teen punk outfit, to New York rap’s coolest newcomer, to a Japanese pop duo whose songs will one day fill arenas. Don’t be surprised come December 2022 to see any of these names on lists of the year’s definitive breakout stars.

Who: Like the protagonist of the best indie coming-of-age movies, 18-year-old Daine is simultaneously above it all and deep in the existential throes of young adulthood. “Does it look like I care about you?/ F*ck your mom, little sister, and your dad, too,” she warns on “IDC.”

What: A modern A&R’s dream combination of genres, she can do hyperpop (“boys wanna txt” with ericdoa), post-Lil Peep emo hip-hop (“My Way Out”), and electronic-tinged screamo (“SALT” with Bring Me the Horizon’s Oli Sykes).

What’s next: Her mixtape, Quantum Jumping, is coming in early 2022.

Who: Critically acclaimed 26-year-old singer-guitarist with a rich, beguiling voice. Her 2019 album Miss Universe was a leap into wideframe songwriting and she’s continued to excel subsequently.

What: More affecting than Cosmo Pyke and Rex Orange County but less esoteric than King Krule, Yanya’s music feels uniquely lived in, like she’s been performing each song for 25 years and has mastered every inflection and strum. She wrings the emotion out of every note and standout tracks like the uptempo “Tears” and the recent “stabilise” show that she can truly master any tempo.

What’s next: Her third LP, PAINLESS, is due out on March 4.

Who: This glamorous, quick-tongued rapper from Tampa, FL made waves in 2020 with the quirky “Yucky Blucky Fruitcake,” her playful single that was not only the perfect self-introduction but also primed to go viral on TikTok. “Hi, I’m Doechii with two Is,” she spits sweetly on its opening lines — and we haven’t forgotten her since.

What: You won’t find cookie-cutter, trend-following raps here. Instead, Doechii’s melodic and sing-songy flow bursts with attitude, placing her squarely in the lineage of other self-assured greats like Nicki Minaj and Flo Milli.

What’s next: TBA, but she released a revamped video of her song “Girls” and a collaboration with Isaiah Rashad and Kal Banks in 2021.

Who: French singer who gained notoriety through a successful run on Spain’s version of The X-Factor in 2018 and France’s iteration of The Voice.

Who: 17-year-old Nashville-based pop wunderkind whose breakout single “abcdefu” became one of the out-of-nowhere hits of 2021’s pop-punk resurgence.

What: Frank, guitar-driven records that blend the candor of a teen and the self-awareness of an older artist. “I'm over bitin' on my tongue / When people tell me I'm too young / To say all the things that I do in my songs,” Gayle sings on standout “dumbass.”

What’s next: A debut album, forthcoming from Atlantic Records.

Who: 21-year-old Londoner with a powerhouse soul voice who’s unafraid to place it in strange, ambitious contexts. She started releasing music a few days before lockdown and seems to redefine her boundaries with each single.

What: Think Jorja Smith if she’d signed to XL Recordings. Her debut track “Vein” starts off like a classic R&B slow-burn before a pitch-shifted bed frame squeak of a sample gives it a hypnotic eccentricity. Her recent song “PBFF” adds a muted psychedelic element — like a tie-dye in greyscale.

Who: French-Korean-American multi-hyphenate Claire Chicha has become beloved among the Lorem and Pollen cool kids for her ability to add bite to bedroom pop (“Anybody Else”) or a beating heart to slick Euro-style club pop (“en quatre”).

What: In the last two years, Chicha has dropped a string of singles and EPs culminating in the versatile Bonnie, which showcases her ability to write lo-fi love songs that sting, dusky dance tracks with industrial guitar and four-on-the-floor percussion, and self-effacing indie rock anthems.

Who: Los Angeles punk quartet who went viral last spring after their defiant, sludgy song “Racist, Sexist Boy” became a social media sensation. The members range in age from 11 to 17, and play their instruments with the same sense of cathartic aggression you feel at one of those anger rooms.

What: Bristling punk music inspired by Washington riot grrrl acts like Sleater-Kinney and Bikini Kill, as well as Alice Bag. Recent singles like “Oh!” and “Rebel Girl” add a layer of big studio polish, but there’s still a DIY charm to the group’s chugging riffs and shared vocals.

Who: J-pop duo composed of producer Ayase and singer Ikura who ascended quickly after releasing their debut single “Yoru ni Kakeru” in 2019, and have had a prolific 2021 filled with IMAX-sized songs. The group also released their first English album, E-Side, in November.

What: Elegant arena pop built around sunny piano lines and energized by booming EDM drums and the occasional swell of a lead synth. Ikura’s voice thrives atop these Alice in Wonderland soundscapes, finding unique pockets and accenting the instrumentation with creative runs.

What: A postmodern take on rap that feels equally inspired by A$AP Mob as it does by Atlanta’s Awful Record. There are plenty of ambitious production touches, like the drum ‘n’ bass breakdown of “Calvin K,” but CLIP’s charisma – think a mellower Rico Nasty – is always front and center.

Who: High-energy synth-pop trio from Brooklyn — Leah, Emily, and Khaya — whose music makes you move your feet without skimping on lyrical and thematic substance.

What: Combining irresistible, swooping hooks with messages about consent, existential anxiety, and gender identity, Moon Kissed’s music is designed to soundtrack the climactic scene in a great coming-of-age movie where the protagonist jumps triumphantly into the pool.

What’s next: The band had to postpone a New York residency in 2021 but will hopefully reschedule those shows soon.

Who: The next indie songwriting sensation out of Atlanta. The 22-year-old Becca Harvey has a dash of Faye Webster’s laidback melancholy, the alt-rock bite of Soccer Mommy, and the wistful folk melodies of Phoebe Bridgers. (She’s even worked with Phoebe’s right-hand collaborator, Marshall Vore.)

What: Breezy but substantive indie tunes destined for the 4 p.m. slot at Pitchfork Music Fest or Shaky Knees. The tracks have an easy gallup to them, but its lyrics deal with everything from the awkwardness of watching a friend cry in public to the all-encompassing power of attraction (“I only love you when you're breathing/ Or moving/ Or waking up every morning,” she sings on breakout single “For You”).

Who: Silver-tongued Detroit rapper who is carrying on her city’s lineage of clever punchlines, cocky flows, and surrealist wordplay. Her 2020 mixtape, Ghetto Pop Star, showcases an artist with a big bag of tricks who makes braggadocious rap seem truly effortless.

What: Lowkey midwestern hip-hop where conversational flows are underscored by moody pianos. Increasingly, she’s shown a willingness to balance hard-edged hustler bars with melodic hooks that give her crossover potential.

What’s next: TBA, but she’s kept a low profile in 2021 so hopefully another project is coming soon.

Who: Mia Joy Rocha is Chicago music’s latest best kept secret. Her eponymous project has been in the works for five-plus years, and she turned heads in 2021 with the excellent LP Spirit Tamer.

What: Tender, contemplative indie rock that rarely breaks a saunter but keeps you at rapt attention. Joy is a wry lyricist, likening a love interest’s inability to call her on her birthday to an absentee child on “Ye Old Man,” and bringing subtle religious symbolism to the spectral track “Across Water.”

What: Heavily autotuned, yet effortlessly cool takes on Spanish trap and reggaeton. Apple Music lists her 2020 album Élite as “gangsta rap,” and while that’s a bit of a stretch, her icy cool demeanor on songs like “Boss B*tch” and “Filet Mignon” really does make her sound like a kingpin on the mic.

Who: Progressive electronic-pop trio putting its own spin on Chicago’s storied history of club music. Its 2021 album Arena has a track for every kind of warehouse party.