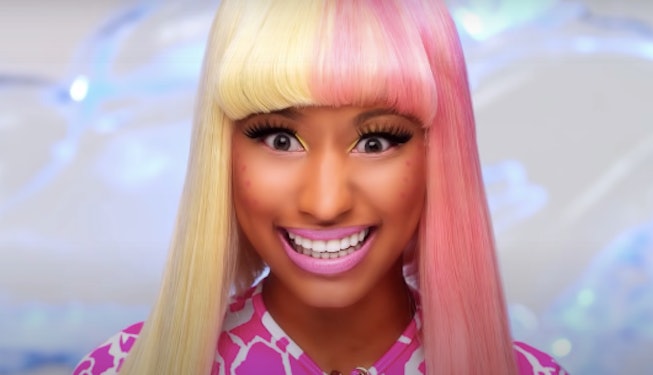 While her mixtape raps and feature verses were major pit-stops on the road to the debut album, on November 22, 2010, Pink Friday fully introduced the rest of us to the wonderful world of Onika Miraj. The planet of the rap artist Nicki Minaj orbits her own ego, both celebrated and chastised through song. With a campy collection of cocky rhymes and personal reflection, Pink Friday stood as a statement of who Nicki Minaj is, who she wants to be, and relied on her tenacity to make it happen.

With a personality that commands attention and over-the-top fashion, Minaj expanded her role in the music industry from a freestyle rapper from the Southside of Jamaica Queens, to a global sensation and hip-hop thought leader exploring multiple genres and themes in music and challenging industry standards both in and out of the booth. On Pink Friday, she stepped into her role as a new millennial superstar, and the complications that arise with fame and fortune were foreshadowed. The era stands as a manifestation of ultimately the game-changer, complicated icon, and hip-hop majesty Mrs. Petty is today.

“Which bitch you know made a million off a mixtape?” she demanded to know, on her featured verse on Drake’s “Up All Night,” which dropped the summer before her debut album. Before Pink Friday, Nicki Minaj was known for her quick-witted, punchline heavy, raunchy mixtape raps. On her mixtapes, she rapped original lyrics over both popular and newly-produced beats.

Her solo career began in 2007 when Fendi, CEO of Brooklyn label Dirty Money Entertainment, signed Minaj. That same year, she dropped Playtime Is Over, Sucka Free in 2008, and in 2009, Beam Me Up Scotty — which landed songs on Billboard charts and changed her career trajectory. She created the project under the guidance and mentorship of Lil Wayne, focusing on lyrical dexterity and musical skill.

"Wayne is my sensei. That's what I call him. He calls me his ninja,” she said at the time.

In August 2009 she signed with the New Orleans rapper’s Cash Money imprint label Young Money, and the countdown to Pink Friday began. Before debuting her own LP, the New York-bred rapper delivered sharp, memorable feature verses and singles that proved Minaj’s weight as more than a gimmick.

On “Monster,” she outshone heavy-hitters Jay-Z, Rick Ross and Kanye West on his own career-defining album, nodding to her own precociousness with the line “50K for a verse no album out.” She added a cocky flair to Yo Gotti’s remix of “5 Star Bitch” alongside Gucci Mane and Trina. She performed one of her best verses on Diddy’s “Hello Good Morning remix. Although the initial single “Massive Attack” did not perform well and was eventually dropped from the album, she followed with “Your Love” which peaked at number-one on the Billboard Rap Songs chart. The tracks “Check It Out” featuring Will. I. Am. and “Right Thru Me” were also released as singles ahead of the big day. She was nominated for a Grammy-award for “My Chick Bad” with Ludacris. Nicki The Harajuku Barbie was prepped and primed to take over.

Pink Friday propelled the artist into worldwide fame, which comes with more weight and responsibility than handing out mixtapes and street DVDs in club parking lots. The album debuted at No. 2 on Billboard’s 200 chart with 375,000 units sold. Pink Friday remained in the top 10, and 11 weeks later, she reached the top spot. Pink Friday has been certified platinum three-times and earned Grammy nominations for Best Rap Album and Best New Artist.

On the album, Nicki Minaj experimented with sound and aesthetic. The cover featured Minaj poised in doll-like fashion with her signature pink bangs and hyper-extended legs. With features from Rihanna, Eminem, Kanye West, Drake and Natasha Bedingfield, she took risks and managed to succeed with cross-over sounds fusing pop, R&B, EDM, and hip-hop.

The mainstream hip-hop scene today is much different than when Minaj entered the game, partially due to her own success. Today, both fans and artists themselves have expanded the constraints that previously contained women to battle it out for a metaphorical throne. Like her predecessors, Missy Elliot, Lil Kim, and Foxy Brown, who also carried torches lit by their fiery presence, Minaj’s intro filled a void in music.

As one of the cover stars for XXL Magazine’s 20th anniversary in 2017, Nicki the Ninja explored her own impact.

“My role in hip-hop has been super unique because when my first album came out, there had been so much time where there wasn’t a female rap album out that went platinum,” she said. “There wasn’t a big female rap presence right before I got in. So, my role was really reintroducing the female rapper to pop culture.”

After receiving plenty of inevitable backlash, Minaj clarified her statement in an Instagram post with a lengthy caption, writing “imagine me saying I made female rappers mainstream when there were so many women who already had platinum albums under their belts. Lauryn sold 10 million off one album, Eve had platinum singles w/Alicia, Gwen Stefani, her own tv show & clothing line. It doesn't get more mainstream/pop than Missy's biggest singles. Foxy&Kim had platinum albums & shaped the sound of NY female rappers, Latifah had her own sitcom, Trina was on billboard with hits, etc.”

In contempt of all controversy and misunderstandings, her reflection was essentially true. In the years before her career kicked off, women emcees were not releasing platinum albums, selling out tours nor commanding space on pop charts. Minaj dominated for years consecutively, as the reigning Queen of Rap, a title proudly boasted throughout her discography. Her 5-year run between 2011 and 2016 resulted in 10 Grammy nominations.

Ironically, the rapper who melodically flowed “you bitches can’t get my spot until I start raising some children” on “Win Again” (The Pinkprint 2014) birthed her first child the same year multiple women in hip-hop broke records and came out on top. Many of the emerging rap acts, male and female, credit Minaj as inspiration for their own rhymes. Her solo spot at the top is gone, but only for the better.

The 37-year-old musician encouraged a new generation to push creative boundaries and embrace their femininity to stand with their male counterparts. Flo Milli, Megan Thee Stallion, Rico Nasty, Big Latto, Maliibu Miitch and numerous other female rap acts have spoken of her influence on their careers and despite critique that she does not play nicely, the rapper has shown the love right back with collaborations, shoutouts, and social media celebration.

Her legacy includes unfavorable moments that often block the “Did It On Em” rapper from recognition, though Minaj dictated it by design. Her rap beef resume includes Lil Kim, Cardi B, and Remy Ma and if the recording booth was the boxing ring, Ms. Minaj has taken a few uppercuts; however, she’s nevert succumbed to a total knockout.

She fell into deeper controversy when she allowed herself to become entangled in collaborations with Tekashi69, whoe tarnished career is decorated with more bad than good. He was also charged with the "use of a child in a sexual performance" in 2015, to which he pleaded guilty. Together, they have three collaborations, including one after his infamous 2019 trial where was labeled a snitch for testifying.

Her husband Kenneth Petty is a registered sex offender, convicted of attempted rape in 1995. He also served seven years behind bars for first-degree manslaughter. Minaj has adamantly stood by his side and even offered her perspective of his alleged crime.

Now a standard for artists seeking superstardom, Minaj was one of the first rappers to name her digital fanbase. Having the Barbz on-call is a gift and a curse. The Barbs mobilize in Nicki’s favor as her personal weapon of mass destruction, whether instructed or on their own. The outspoken artist’s digital army of trolls and stans hurl insults and death threats to people critical of their perceived flawless queen.

Her allegiance to alleged and admitted abusers is afflicted with the themes of vulnerability, encouragement of women demanding more and female empowerment shared through music, interviews, and social media. Nicki Minaj’s infamous “pickle juice” clip from her 2010 MTV documentary My Time Now expressed demand behind her perceived attitude, and the desire to dismantle the double standards in the industry.

“When I come to a photo shoot, let it be of quality,” she said. “So if I turn up to a photo shoot and you got a $50 clothes budget and some sliced pickles on a motherfu**in’ board, you know what? No. I am gonna leave. Is that wrong? Wanting more for myself? Wanting people to treat me with respect? You know what? Next time, they know better. But had I accepted the pickle juice, I would be drinking pickle juice right now.”

The rap star continued, “When I am assertive, I’m a bitch. When a man is assertive, he’s a boss.”

Although this revelation came over a decade ago, it added an important piece to the Nicki Minaj puzzle. As a woman, Minaj was required not just to rap well beyond her male peers, but also to be likable. In rejecting respectability politics, the rapper in-turn fueled a landmark career. With the announcement of her new, "raw and unfiltered" six-part docuseries headed to HBO Max, we'll soon get an even better understanding of the personal and professional hurdles and successes Minaj has experienced over her life.

Hopefully, through the next decade and beyond, the evolution of Nicki Minaj in life and art is not hindered by her own undoing. Her professional blemishes and scars are capable of fading with a self-applicated serum of accountability, and still do not erase the influence established 10 years ago by the Nicki Minaj who hopped off club stages to sign the breasts of gleeful fans.

In 2020, her influence stands as one of the most successful rappers of the millennium, regardless of gender identity — which only confirms her power. She battled misogyny and industry bias against Black women to carve her own identity and sound. There are Minaj dolls, magazine covers, branded lipsticks, drinks, high-end fashion, affordable retail collaborations, nail polish, fragrances, film roles, and more.

Onika Tanya Maraj-Petty has performed during the Super Bowl halftime, the Grammy Awards, and headlined global tours. The icon holds two number one albums, dozens of awards including 10 BET Awards, 10 BET Hip Hop Awards, and 5 MTV Video Music Awards. Her career accomplishments are the dream of many artists of the past, present, and future. She has highlighted and helped shift double standards and pushed for equality among men and women beyond rap music and continues to be recognized as an authoritarian force in hip-hop culture.