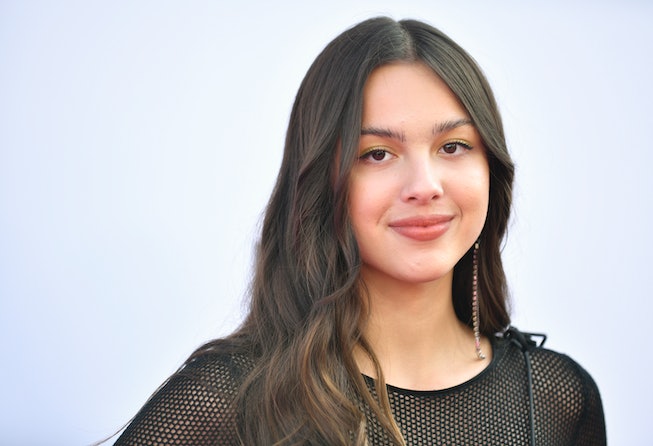 Olivia Rodrigo is on a roll. Just three days after announcing her first world tour, the singer-songwriter has been named Entertainer of The Year by TIME Magazine. The Sour artist graced this year's cover in an elegant all black outfit, featuring a large hoop skirt, opaque turtleneck, and glittering pendant necklace.

For the cover story, Rodrigo spoke with TIME journalist Lucy Feldman — while vintage shopping in LA — about her rise to fame, writing songs in her bedroom, and combating negativity.

“It was really frustrating to see people discredit and deny my creativity,” Rodrigo explained, referencing the push for her to credit several artists on her debut album for music interpolations. Taylor Swift and writing partner Jack Antonoff were famously credited on the Sour track, “Deja Vu,” which critics believed sounded a lot like Swift's song “Cruel Summer.” After that, more comparisons came flooding in, noting similarities between Rodrigo’s songs and other popular hits.

The rising pop-punk star then credited Paramore on the single, “Good For You,” which resembles their 2007 track “Misery Business.” Swift and Antonoff also received another credit for an interpolation of their Reputation track, “New Years Day,” on Rodrigo’s anthem “1 Step Forward, 3 Steps Back.”

Despite the push for her to assign credit elsewhere, Rodrigo has also been deemed a young prodigy for her uncanny ability to tell engaging stories through music. In the past ten months alone, she’s received shout outs from Cardi B, Taylor Swift (who’s Rodrigo’s favorite artist), Avril Lavigne, and punk-legend Alanis Morissette, who spoke with Rodrigo for Rolling Stone’s “Musicians on Musicians” series.

Speaking of the album's success, Rodrigo told Feldman that Sour was created from the comfort of her home. “I literally wrote them in my bedroom, and I think you can tell,” she said. Though the music was drafted in her room, Rodrigo worked with producer Dan Nigro to bring them to life and the rest is history.

Though she’s an undeniable talent who’s likely been influenced by those who came before her, Rodrigo explained she’s tired of being likened to other female musicians. “Young women are constantly compared to each other,” she said. “I’m the ‘new this’ or ‘this woman meets that woman,’ and that can be reductive.” “I’m just Olivia,” she continued. “I’m doing my own thing. It’s meaningful when people recognize that.”