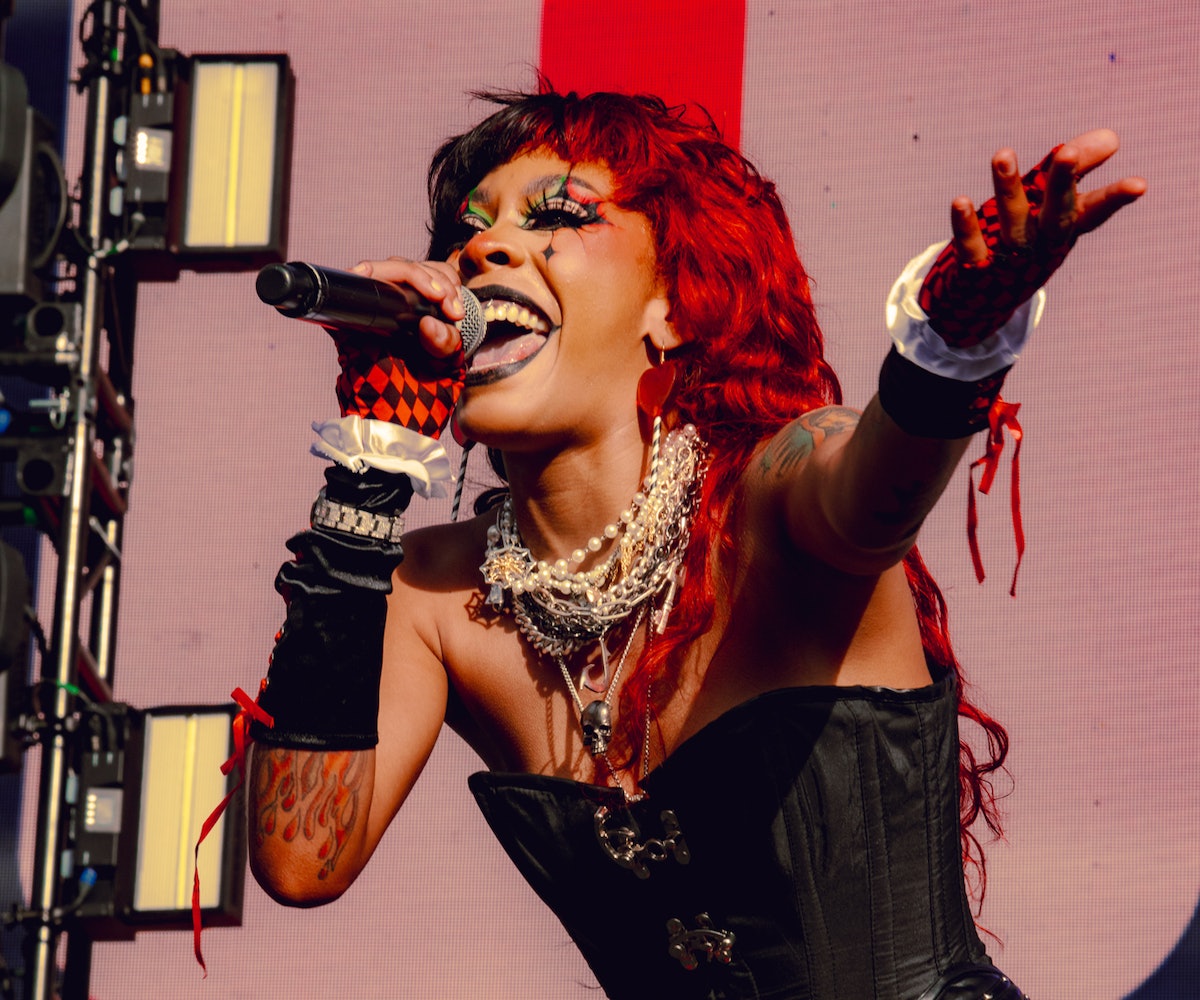 Courtesy of Outside Lands

Somehow, Outside Lands escaped San Francisco. As soon as the festival, which took place this past weekend on the ocean-bordering edge of Golden Gate Park, opened Friday afternoon, the costumed revelers — taking advantage of Halloweekend, streaming in on foot or scooters, festooned with capes and wigs or zipped into kigurumis and other novelty onesies — were treated to dizzyingly bright sun and sublime slices of cloud strewn sky. Though the fog occasionally rolled in thicker than a rustic slice of sourdough, the biggest Californian music, food, drink, and smoke festival in over a year unfolded in unusually auspicious conditions, with the past weekend’s storm leaving the grounds smelling freshly of bay and eucalyptus.

Peoples’ costumes ran the gamut from classics like the Scooby Gang to new hits like Squid Game, though by far the most popular costume was some combo of cow print and western wear (think Doja Cat’s “Mooo!” era x yeehaw culture). It was obvious festival goers were there to peacock, and the largely maskless crowds mixed, mingled, and moshed with a carefreeness that felt both self-congratulatory and actually congratulatory.

Perhaps the tacit costume (and vaccine) mandate freed performers and audience members alike to let loose more than they normally would’ve. Whatever the case, these five performers reminded NYLON, and many others, why there’s still nothing quite like doing it live.

Sharon Van Etten probably can’t control the weather, but it seemed a divine trick that as her Friday afternoon set began, fog appeared seemingly out of nowhere and swallowed up the Lands End stage located in the park’s polo field. Resplendent in a mirrorball minidress and barefoot among her band, Van Etten roared her way through a set largely pulling from her 2019 album Remind Me Tomorrow. Whether punching through the gothic gloom of “Jupiter 4” or leaning so hard into the Springstonian vibe of “Seventeen” that it seemed the Boss himself was there in spirit, her voice cut through the fog like a hot, heavy knife.

But when she wasn’t manipulating the climate, Van Etten was chuffed and bubbly, grinning and laughing like she just couldn’t believe she was performing on a stage. This eagerness manifested in a new song debut and, delightfully, a guest appearance from Angel Olsen, who would play the festival the next day. They brought the thunder on “Like I Used To,” singing about the way their lives once were like they’d been making music together forever instead of being new collaborators brought together by lockdown. Nostalgia never ached so good, or sounded so jubilant.

Flo Milli’s set began under a light mist, but the only rain she acknowledged was the kind made of money: a projected forecast in her bank account. Wearing a Barbie pink two-piece ensemble and donning a deadpan demeanor, Milli eviscerated haters, broke men, and wannabes with the precision of your high school bully but with the over-it attitude of someone who never studied yet still pulled straight As.

Against a backdrop collage of her own publicity pics with the Kardashian-Jenners and the Clovers cheer squad from Bring It On, Milli delivered a set whose thesis was best summed up as: “Unburdened, Unbothered.” She punched up catalog classics like “Beef FloMix” and “May I” and newer tracks like standout “Weak” with her signature “What?” The mostly young crowd matched her beat-by-beat, teardown-by-teardown, triumph-by-triumph. Unlike other performers that weekend, Milli never had to ask the audience to turn it up — rain or not, nothing could dim her shine.

The polyglot rapper’s own Camp Flog Gnaw festival still isn’t back, so Tyler simply folded the natural hollow of the Twin Peaks stage into his own designs. The blissed-out landscapes that served as his stage backdrop worked as a hat tip to Outside Lands’ location, the audience’s certain love of outdoor activities, and his own status as a force of nature, a particularly charming chameleon whose summer album CALL ME IF YOU GET LOST marked a new era of a tougher, more cautious Tyler. He’ll always be a provocateur, but now he’s also — to keep the camp theme going — more of a counselor than a kid in the woods, rapping recent tracks like “MASSA” and “LUMBERJACK” and older ones like “Goblin” with newfound gravity that sounds potent in his rumbling growl.

But Tyler can still summon butterflies and now-classics “See You Again” and “EARFQUAKE” had the crowd swooning at his feet. Out of all the weekend’s performances, his had the most emotional and sonic range. Iconoclasts often mellow over time, but Flower Boy-turned-Igor-turned Tyler Baudelaire keeps, sets, and then outdoes his previous records. It’s a pleasure to watch him in a class of his own.

Sincere question, did Rico Nasty even dress up for Halloween? Her manic harlequin fit and makeup seemed like the kind of get-up she’d wear to the mall, though the balloon hammer she swung around as she took the stage was a special touch. Leaping, screaming, and laughing like an acid-spiked Pied Piper, Nasty whipped the crowd into submission as she tore through a discography that’s only gotten stranger and stronger since she first burst onto the scene.

Though her bread and butter, based on the crowd’s reaction, is still the fists-up bluster of songs “OHFR?” and “Smack A B*tch,” Nasty convincingly flirted with tenderness on songs like “IPHONE” — the line “Smoking so much gas, I forgot to put my mask on” hits differently now — and “Ringtone,” the 100 gecs remix she shares with Charli XCX and Kero Kero Bonito. Like those artists, Nasty loves blending her genres as if she’s actually feeding them into a blender. She’s not quite there yet, but given the way both her music and the culture at large is going, I can’t wait for her full-blown nü-metal era, which might be the only way she tops the energy she brings to her performances now.

Yves Tumor And Its Band

It’s true: Yves Tumor’s live show will make you a believer. As soon as the opening fanfare of “Gospel for a New Century” kicked in, necks snapped — and then Tumor strolled out onto the stage like a matador. Dressed in a crushed velvet catsuit and adorned with leather and metal, they oozed a contagious self-confidence, not always in the spotlight but completely in sync with their band.

And what a band. It’s not always obvious when front people are essentially working alone, but Tumor’s songs, from the howl of “Kerosene!” to the richly textured breakdown of “Dream Palette,” take off when they have the sonic and physical space to expand and unravel. In particular, the psychic spiral of “Jackie” was a revelation, its repeating verses chanted back by the crowd like a religious mantra. Consider this a declaration of love.

The Best Sets Of The Fest: Pitchfork Music Fest 2021