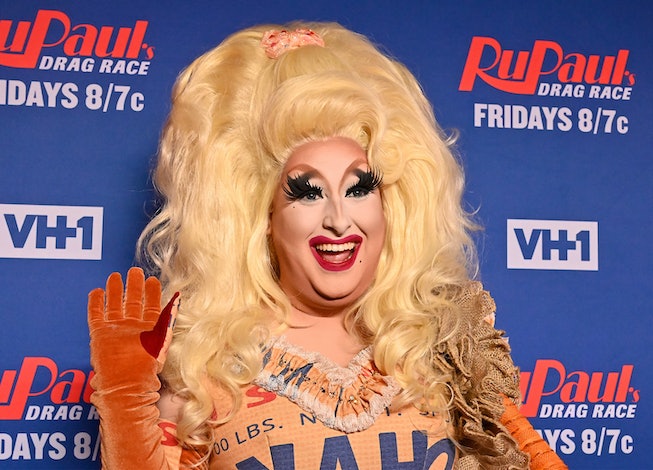 The majority of the blame can fall directly onto the shoulders of Sherry Pie, the campy New York-based queen who, right before the season was scheduled to begin airing in early 2020, was exposed for catfishing as a high-powered female casting agent in order to coerce at least 12 young aspiring actors to send in compromising tapes of themselves performing sexual acts (ranging from nude masturbation to steroid use), under the false pretense that they could possibly be cast for a variety of unrelated projects. In response to the allegations — which the queen (whose real name is Joey Gugliemelli) eventually apologized for, stopping short of admitting to anything specific — Drag Race producers were forced to re-edit the majority of the already-filmed season in order to ensure that Sherry was given as little screentime as possible.

The allegations against Sherry are serious, and in the grand scheme of things, World of Wonder took the appropriate action — in addition to being edited out of season 12, Sherry Pie was disqualified from the show and forbidden from appearing in the virtually-filmed finale. Gugliemelli's survivors were still coming to terms with the trauma of his sexual abuse, and forcing them to see their abuser succeed on TV and in the world had the potential to be very triggering. The first person to come out about Gugliemelli's crimes, Ben Shimkus, spoke openly about how hard it would be for him to not be able to watch a show that he usually "couldn’t get enough of."

Gugliemelli's sexual predation not only affected his victims, but also affected his fellow contestants and millions of Drag Race fans around the world. After bearing through the uncomfortable season, it was a relief to finally come out the other side, where we'd never have to hear his name (drag or real) ever again.

Yet, for some strange reason, Sherry Pie's name has managed to wriggle back onto our Twitter timelines and Facebook feeds thanks to a recent appearance on Tamron Hall, where the namesake talk show host interviewed the disgraced queen about the allegations she's already admitted to.

“I’m here just to apologize, and I want to make that clear,” Gugliemelli said near the beginning of his appearance. “I understand now, in lieu of this year, how much pain I’ve caused.”

Amongst talking points that included whether or not he feared criminal charges due to his actions ("I'm prepared to take any responsibility") and what, exactly, motivated him to do the things he did (“It was about control and fear"), Gugliemelli also opened up about the borderline personality disorder diagnosis he received right before his harmful actions came to light.

“There’s an immense amount of fear that comes with having BPD," he told Hall. Though he specified that he had no intentions of blaming his alleged crimes on his mental illness, Gugliemelli did use the opportunity to vocalize the fact that he's had a long history of insecure relationships with men — starting as a child, when his father left his family.

When Sherry Pie was first announced as a guest on Tamron Hall, many (including myself) were quick to point out how problematic it is to give such a huge platform to an admitted sexual predator — particularly when none of his victims have been given similar opportunities. Jackie Cox, who competed alongside Sherry on Drag Race's twelfth season, "publicly called on" the show's producers to "reconsider giving Sherry Pie access to the platform of national television to tell their side of the story." Later, she added that doing so is "irresponsible, immoral, & wrong."

Ilona Verley, one of the contestants on the inaugural season of Canada's Drag Race and a survivor of sexual abuse herself, echoed these thoughts, saying, "[Sherry] needs to understand it’s not possible to come back from something as horrid as she did and if she actually felt bad she wouldn’t have taken this opportunity to further traumatize her victims."

Meanwhile, the aforementioned Shimkus, tweeted, "Our trauma shouldn't be whittled away to internet click bait. We deserve better than this." Later, he accused the show of platforming Gugliemelli "because violence against queer people is too often normalized."

In response to the numerous critiques, Hall took time to justify the segment, which aired live as planned earlier today. "I've been a reporter for 30 years," Hall told her audience. "I've conducted and I've watched interviews with people who have done bad things. I've interviewed rapists. I've interviewed murderers. I remember interviewing a woman, while she was still behind bars, who murdered a child she was trusted to care for."

"It's not giving away your platform. It's called an interview, and people who do bad things are interviewed," she expanded, before citing the recent media storm surrounding R. Kelly, who was infamously interviewed about his own sexual abuse allegations, as an example.

On that note, Hall is correct. Nevertheless, it doesn't justify the fact that Gugliemelli was given a televised platform to further express his side of the story, while his victims were not. While many of R. Kelly's victims, for example, were given opportunities to voice their own experiences — there was an entire docuseries dedicated to them, in fact — Gugliemelli's victims were not. That many of them are now forced to contend with his name in the press yet again is harrowing, particularly when this could have easily been avoided.

"Sherry Pie" will forever be a stain on the otherwise empowering entity known as RuPaul's Drag Race. Hopefully this is the last we ever have to hear of her name.