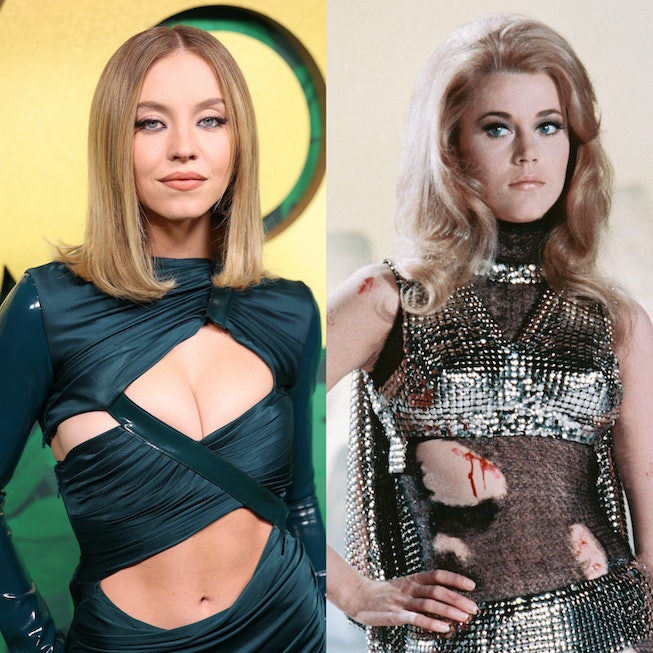 Back in 1968, industry legend (and proud leftist activist) Jane Fonda fronted a soon-to-be classic film, Barbarella. A sexy sci-fi tale about a time-traveling government agent sent to stop an evil scientist from inventing a potentially deadly weapon of mass destruction, the film has withstood the test of time, becoming a cult classic that has inspired film and fashion. And now, more than fifty years after its initial release, Barbarella is getting a 2020s remake, with Emmy-nominated Euphoria star Sydney Sweeney attached to star as the title character.

News of the forthcoming project first came from Deadline, who also revealed that the young starlet would be an executive producer. According to reports, the proposed remake is in the earliest stages of development. In fact, Sweeney’s casting seems like the only thing that actually has been agreed on. At the moment, the new project has not found a writer, a director, nor any producers. Which is to say: this film won’t be getting made for a while.

Of course, there’s no real reason to rush anyway, especially when considering how much Sweeney currently has on her plate. Though she lost in both Emmy categories she was nominated in, Sweeney has not taken any time to rest. She recently wrapped production on Tony Tost’s directorial debut National Anthem, where she leads a cast that includes Halsey, Paul Walter Hauser, and Simon Rex. And currently, she is filming Madame Web, a new entry into the Sony Marvel catalogue, where she will appear next to Dakota Johnson (as the title character), Girls’ Zosia Mamet, and Scream Queens’ Emma Roberts. (I’m choosing to ignore her wig.)

And if it wasn’t already apparent that the executives at Sony Pictures love them some Sydney, the recent news that the studio acquired adaptation rights for The Registration, which will star and be produced by Sweeney, should clear that right on up. And oh yeah, let’s not forget about her commitments for season three of Euphoria. After earning an Emmy nomination for her go-for-broke performance in season two of HBO’s technicolor teen hit, show creator Sam Levinson will definitely be giving her a lot to work with once filming for that kicks back up.

So, yeah, Sydney Sweeney is busy busy. But whenever she is ready to jet off through the space-time continuum in a sickening Courreges-inspired spacesuit, I’ll be ready.