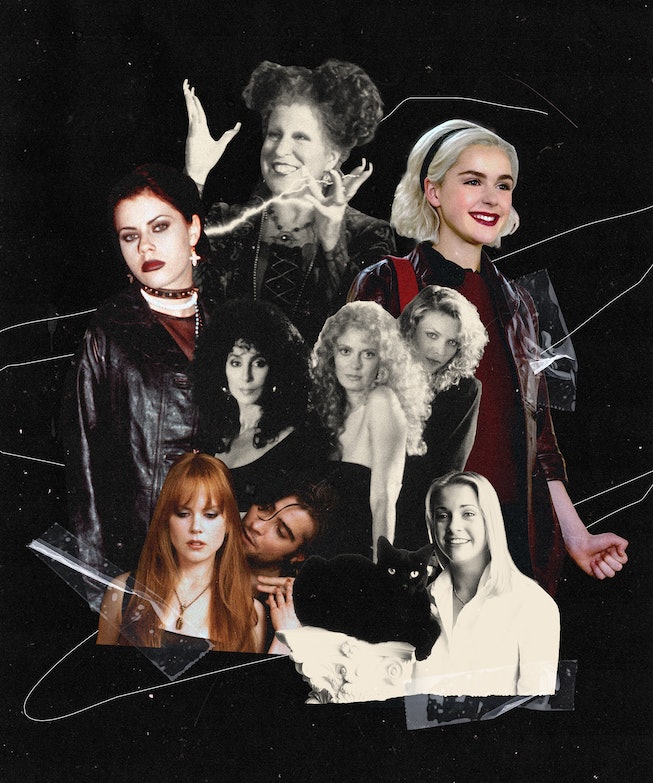 As we prepare for the oncoming darkness of winter, the transitional season of autumn reminds us of all things witchy — from the black cats and broomstick-style of traditional witches, to the darker elements of witchcraft, Scorpio-blessed Halloween will always be the season of the witch.

Witches seem to be culturally ubiquitous lately, as covens flourish online and witches share DIY magic tips on TikTok. But the archetype of the witch has long been present in pop culture, from the books, stories and myths that first introduced us to them to modern day witch depictions like The Craft. Whether you’re looking for a wholesome visit down witch lane (if that’s ever truly possible), or the spookier side of witchdom, here are 17 of the best TV shows and movies about witches on streaming now.

With plenty of clear nods to the original witch TV show, Bewitched, WandaVision follows Marvel superhero-turned-1950s-housewife Wanda (Elizabeth Olsen), also known as the Scarlet Witch. As Wanda and her husband Vision (Paul Bettany) try to hide their superpowers from their friends and neighbors, they also contend with the strange reality of living within a sitcom. (Disney+)

Inspired by the real Salem witch trials in 1692 Massachusetts, Salem imagines a world where there truly were witches in Salem, rather than young women being scapegoated by their society. One of them, Mary Sibley (Janet Montgomery), hopes to summon the Devil until her estranged love (Shane West) arrives on the scene. The show features horror, historical drama and plenty of witchcraft. (Hulu)

While True Blood may mostly be known for its vampires, the supernatural series also features plenty of witchcraft, and its Louisiana, Southern Gothic-style setting and storylines give it an extra spooky feel. Throughout the groundbreaking show’s seven seasons, the characters encounter plenty of examples of the occult, from psychics and dark magic to werewolves and faeries. (HBO Max)

A Discovery Of Witches (2018-present)

Lesser known in mainstream culture but no less a massive hit, the British show A Discovery Of Witches features witch Diana Bishop (Teresa Palmer) trying to rediscover her powers after coming across a magical manuscript at the Oxford University library. The show has all the hallmarks of great witch TV, from illicit affairs with vampires to time travel to 16th century England. (Amazon Prime)

The classic late ‘90s/early aughts show features Melissa Joan Hart as Sabrina Spellman, a teenager with magical powers who also comes from a long line of witches. Sabrina has all the classic witch tropes, from a wise-cracking black cat named Salem to wacky and witchy aunts who pass down their knowledge to Sabrina. (Hulu)

Vampires and witches go together like candy corn and haters, and Buffy The Vampire Slayer is no exception to this rule. The classic series starring Sarah Michelle Gellar as the titular Buffy features its fair share of witchy encounters. NYLON captured all the greatness of the show with Buffy Week. (Hulu)

Charmed (and its 2018 reboot on Netflix) features three sisters (Alyssa Milano, Holly Marie Combs and Shannen Doherty later replaced by Rose McGowan) who have the “Power of Three” to fight evil. The early 2000s original from The CW was a hit among those who love both the occult and drama — here you’ll find both. (Peacock)

Ranked second out of ten seasons of American Horror Story by NYLON, Coven is the AHS season to which many credit their love of the series. And why not? Coven has everything you need in a witchy show, from witches getting burned at the stake to a surprise campy cameo by Stevie Nicks. The season also included a star-studded cast of iconic actresses, pairing legends like Angela Bassett, Patti LuPone, and Kathy Bates with AHS mainstays Jessica Lange and Sarah Paulson (and of course, younger talent like Emma Roberts, Taissa Farmiga, and Gabourey Sidibe). (Netflix)

Morticia Addams certainly reads as a witch, with her long black hair and overall spooky demeanor, and The Addams Family shows that spooky culture has been alive and well for decades. The ‘90s comedy, based on the original 1960s sitcom, still holds up today — given its macabre sense of humor and cynicism, especially found in Halloween teen queen Wednesday Addams, iconically played by Christina Ricci. (Amazon Prime)

It’s not officially Halloween season until someone suggests a Hocus Pocus rewatch. With Bette Midler, Sarah Jessica Parker, and Kathy Najimy starring as three witches awoken from an eternal slumber to wreak havoc on a modern suburb, this comedy is an undeniable classic in the witch movie canon. (Disney+)

It also wouldn’t be a witch list without The Craft. Both the 1996 original and 2020 reboot are a look at modern teenage girls’ lives and how the sudden introduction of witchcraft can seem to change things overnight. (Hulu)

In Practical Magic, Sally (Sandra Bullock) and Gillian Owens (Nicole Kidman) are sisters born into a magical family who’ve mostly avoided witchcraft themselves until an unexpected tragedy forces them to dive into their powers. It’s essentially also a classic ‘90s romantic comedy, only with witches. (HBO Max)

In this classic anime coming-of-age film, 13-year-old Kiki moves to a seaside town with her talking cat Jiji to spend a year alone in witch training. She sets up a successful courier service after learning to control her broomstick — but eventually must overcome her self-doubt in order to truly master her powers. (HBO Max)

The Love Witch is all style, like a film version of a Lana Del Rey Pinterest mood board, but in the best way. Set in eerie Southern California, Elaine (Samantha Robinson) is a beautiful young witch determined to find love. From her gothic Victorian apartment, she casts spells and makes potions meant to seduce potential lovers. When her witchcraft works too well, she’s left with a man too many, and is driven to the brink of insanity. (Amazon Prime)

One of the scarier entries on this list, A24’s The Witch is a slow burn psychological horror film set in 1630 New England. When a farmer and his wife find their youngest son has gone missing, eldest daughter Thomasin (Anya Taylor-Joy) is accused of witchcraft by the increasingly paranoid family. (Netflix)