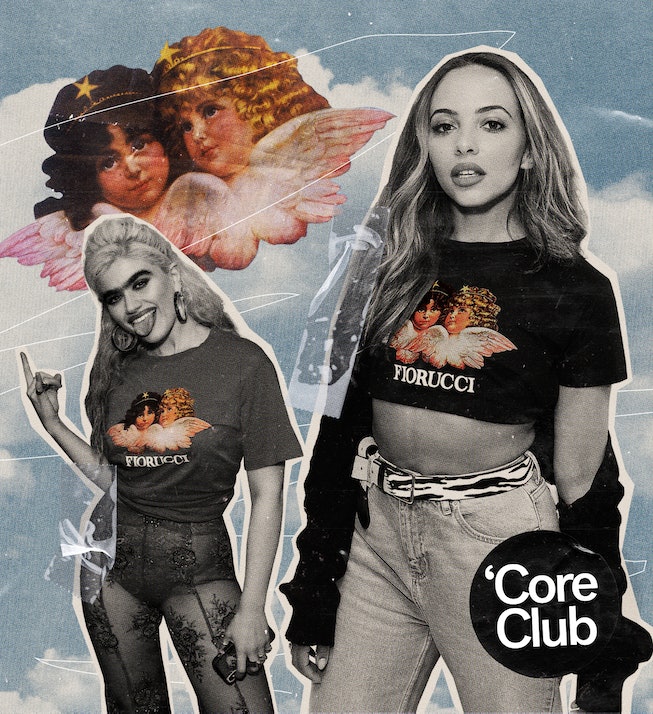 Whether it's a fashion trend on TikTok or a certain style taking over Instagram, internet aesthetics are always changing. Our series 'Core Club breaks down the looks that you're starting to see a lot on social media and highlights the people and brands channeling it best. Next up: angelcore.

With around 52 million views on TikTok alone, the angelcore aesthetic has dominated the internet, and, it seems, it’s here to stay. A scrolling glance through its hashtag feels like a breath of fresh air. Inspired by the European Renaissance era, among other influences, like the late ‘90s and early 2000s, angelcore’s fashion sense embodies fluffy tulle dresses, lace, and any type of garment you could ever dream of. The style is dainty and adorable, with imagery of angels and florals in a light color palette.

Isabella Ricci, a fashion designer known as @isa.bella.ricci on TikTok, describes her style as a blend of popular aesthetics, including angelcore, cottagecore, princesscore, and soft girl. Marie Antoinette meets Cher Horowitz. Though, this wasn’t always the case.

“I’ve loved fashion since I was little and anything baby pink and tulle has had my heart since then. My fashion design (and home decor) aesthetic has always consistently been in that realm, but what I wore every day was sometimes a disconnect,” Ricci tells NYLON. “I’m my own muse when I design and I think for a while my everyday style was sometimes doing a disservice to myself. I realized this in 2019 and I started to become more intentional about what I wear every day since then. My outfits give me so much more joy now.”

Camri Hewie, a 24-year-old model, dancer, and content creator based in New York City, says that she’s been channeling angelcore over the past decade, prior to the aesthetic having a name for itself. “I would say that my aesthetic is something that has been pretty consistent for the past 10 years. It is very hyper-feminine, romantic, Venusian, and alluring with a little bit of an edge,” she tells NYLON.

What sets angelcore apart from adjacent aesthetics, such as the more popular cottagecore and fairycore, as well as the very different devilcore, is that the beloved trend is one that unapologetically embraces femininity. Rather than just visuals, Ricci explains that angelcore is more of a feeling you create: “With cottagecore, princesscore, and royalcore, you can find a garden or beautiful architecture somewhere and look perfectly at home, and while location scouting for those can definitely be tough, angelcore makes me wish I could go hang out in the clouds.”

Recently, labels like Selkie and Lirika Matoshi, known for their romantic, ethereal dresses, have made a name for themselves within the angelcore community. The all-in-one shopping app Klarna reports that searches for angelcore clothing pieces are at an all-time high. For example, white and light pink dresses saw a 244% increase in searches in just August alone.

In addition, fashion brands have noticed an increased demand for their angel-centered pieces. Fiorucci has spearheaded the angelcore look, thanks to its classic tees printed with the Italian fashion label’s iconic cherub. Menswear artistic director Daniel Fletcher explains that angel imagery has always been a staple for the brand. “It’s funny to think of angelcore as a trend because, for us, it’s part of our DNA,” Fletcher tells NYLON. “Our angels go back to the very beginning of the brand in the ‘60s and have become as recognizably Fiorucci as the name itself.”

Accessories also play a role in achieving the aesthetic, especially on-trend beaded jewelry and chunky pearls. Frasier Lipton, founder of Frasier Sterling — whose pieces have been worn by the likes of Gigi Hadid, Hailey Bieber, and more — believes angelcore coincides with the now in-demand ‘90s and Y2K trends. “Angels had such a major moment when it comes to ‘90s and Y2K fashion, and as someone who grew up in the ‘90s, I’ve always loved incorporating those nostalgic trends into my designs,” Lipton tells NYLON. “Frasier Sterling has had a soft and girly vibe from day one, so incorporating angels into its aesthetic happened naturally.”

Founder Samii Ryan’s LA-based namesake brand, known for its ultimate cool-girl and youthful pieces, also incorporates whimsical angel imagery and soft pastels. A collaboration with artist Havanna Winter from December 2020 includes a sweatsuit tie-dyed in mint green with a butterfly motif and the catchphrase “Angel Energy” emblazoned across the front of the hoodie. “I think people are wanting to show a vulnerable side of their personality and express what they believe in, but in a more subtle way,” says Ryan. “Also, the soft aesthetic of angels fills everyone’s Pinterest board because let’s be real, who doesn’t want to live in a fairytale?”

While the pandemic’s lockdowns and quarantines influenced wardrobes across the globe to lean more towards loungewear, the time at home has also influenced everyone to explore new realms and reinvent themselves.

“The pandemic allowed people time to self-reflect every aspect of their life, and self-expression through clothing is one of those aspects,” says Ricci. “Finding your personal style takes a lot of unlearning and a lot of self-care.”

Similarly, Hewie adds that in times of somewhat-bleak current affairs, like the delta variant and climate change, people want to gravitate towards lighter means of expression. “I think that it comes from a need to feel otherworldly and light in a time where everything feels very heavy and dark,” she says. “The angelcore aesthetic is very beautiful and I believe that dressing in a manner that appears to be ethereal can definitely make a person feel that way internally.”

“With the ‘90s and early Y2K trends making such viral comebacks, it’s no surprise that angelcore is having a moment right now,” observes Fletcher. “The aesthetic is the ultimate relic of the ‘90s and early 2000s. Nostalgia aside, I also think that because the world is feeling less than heavenly right now, people love an excuse to dream a little and feel like a kid again.”