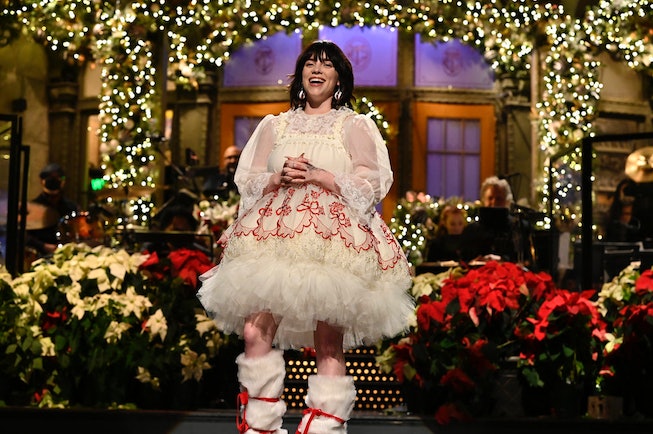 On Saturday, Dec. 11, Billie Eilish appeared on the latest episode of Saturday Night Live, with this being her first time as both host and musical guest. (She made her SNL debut back in September 2019 with her performances of “bad guy” and “i love you.”) Eilish, who wore a fluffy tulle ensemble from Simone Rocha’s Spring 2022 collection and fuzzy red-and-white boots, greeted the audience on stage, “You may know me from my music, you may know me for my hair or my clothes, that’s why I decided to dress like Mrs. Claus going to the club. But actually, no. I’m only wearing this because after the show I gotta go get married in an animé.”

In her beginning monologue, Eilish finally addressed a long-time discourse surrounding her style, body, and overall appearance, as she’s known for sporting baggy ‘fits and streetwear-inspired looks in the past. The singer then continued to discuss the public’s attention to her looks over the years, stating, “I am turning 20, or as the internet calls that, middle-aged, but I am actually really excited to get older because I am just now starting to understand who I am as a person. And the scary thing about growing up in the public eye is people just decide that everything you say, and do, and look like, is who you are forever.”

She also added, “It’s not fair. Would you want to be judged by the way you presented yourself when you were 16?”

Not only did Eilish impress in the 90-minute holiday episode’s sketches and performances of two songs from her hit sophomore album, Happier Than Ever, but the show featured surprise cameos from her parents, older brother Finneas, and Miley Cyrus, who will soon be hosting a New Year’s Eve special with SNL cast member Pete Davidson.

Ahead, check out the rest of our favorite celebrity looks right here, including Miley Cyrus in Marni, Zendaya in Alexander McQueen, Alana Haim in Nina Ricci, and more.

Justin and Hailey Bieber were seen in London sporting the ultimate matching couple ‘fits. In a photo by Lauren D. Walters, the duo wore neutral-hued power coats, with Hailey rocking a Balenciaga coat over a white top, which she paired with a scarf from Bottega Veneta, denim jeans, and Nike Dunks. By her side, Justin opted for a tan double-breasted coat from Paul Smith, which he wore with a white turtleneck, corduroy trousers, white sneakers, and a mint blue beanie.

If I Can't Have Love, I Want Power singer Halsey wore a black-and-white ensemble by Kamilla Purshie to the premiere of Sing 2 in Los Angeles, along with knee-high buckle boots.

As expected from our favorite fashion darling, Lizzo was captured off-duty rocking a custom “wet look” corset and maxi skirt by Di Petsa, along with a mini Louis Vuitton monogram bag and platform white sneakers.

During her latest appearance in New York City, Zendaya was captured on Friday, Dec. 10, for the live recording for Good Morning America and an appearance for SiriusXM rocking a tailored suit in a bright Barbie pink from Alexander McQueen. She completed her look with black pointed pumps and a pair of silver hoop earrings.

Charli XCX was seen on her way to iHeartRadio’s 2021 JingleBall concert in New York wearing an all-black look, including a blazer adorned with silver hooks, a matching bralette, and an asymmetrical skirt. She completed her look with square-toed black boots, a mini handbag, and accessories including a pale gold and palladium choker and a single long chain earring by Justine Clenquet.

Kimora Lee Simmons celebrated the relaunch of her early-aughts brand Baby Phat along with her daughters Ming and Aoki. In a recent photo, the trio all wore coordinated leopard-printed pieces, including lace mini dresses and low-waisted skirts from the new collection.

King Princess was spotted at the Ralph Lauren Fragrance Ralph’s Club event in Los Angeles along with her partner Quinn Wilson wearing looks from Ralph Lauren, paired with shoes from Christian Louboutin. King Princess is also wearing a silver necklace by Justine Clenquet.

The Dickinson star Ella Hunt arrived at the store opening of Acne Studios in New York’s SoHo wearing a distressed knitted tank and black bottoms from the brand. She also paired her look with a tan belt at the waist, pointed black boots, and a red handbag.

Bulgarian actress Maria Bakalova attended the Balmain x Dogpound collaboration celebration in Los Angeles wearing a monogram set from the Parisian fashion house, along with the limited-edition “B-Bold” sneakers from the collection.

Miley Cyrus looked absolutely stunning on her way to the recording of Saturday Night Live, where she was seen wearing a blue-and-black blazer from Marni’s Spring 2022 collection over a black top and a matching frayed hem mini skirt. She then accessorized her outfit with Louis Vuitton sunglasses, a quilted Chanel purse, and over-the-knee platform boots from Prada’s Fall 2021 collection.

Actress Hari Nef arrived at the premiere of HBO Max’s And Just Like That... in a long-sleeve fringe white gown from Ami and bejeweled heels, which she wore with dangling earrings from Cicada Jewelry, a ring from Kat Kim, and a black bow headband.

Actress Alexandra Shipp attended The Hollywood Reporter’s 2021 Women in Entertainment Breakfast, opting for a white silk bustier and shorts from Dior’s Resort 2022 collection, which she paired with a gold belt at the waist and pointed copper heels.

British actress Lucy Boynton attended the Chanel Metiers D’Art show in Paris wearing a striped tweed dress over a white blouse by Chanel. She completed her outfit with a pair of monogram sheer tights and black Mary Janes also from the fashion house.

The Magdalene singer FKA Twigs attended the world premiere of The King’s Man in London donning an orange hooded ensemble from Miss Corpus, which she also paired with brown boots and gold accessories.