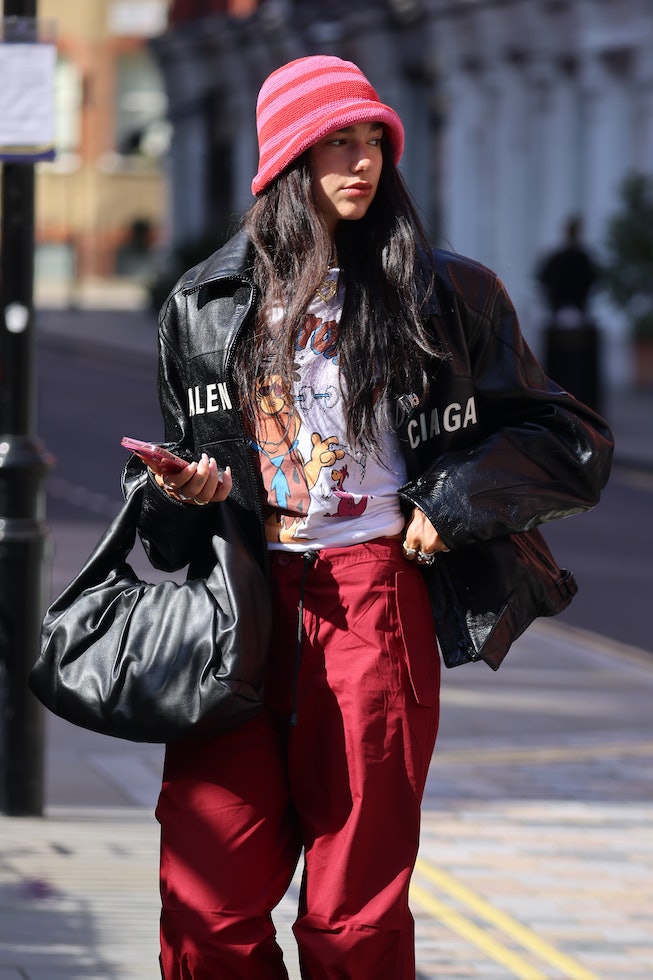 Dua Lipa and her trusty crochet hat have been pushing the craftcore-inspired agenda all summer long, and we’re finally caving in. On Wednesday, Aug. 25, the Future Nostalgia singer was seen in London wearing a pink and red striped crochet bucket hat. Though this accessory has been considered a warm-weather must-have, Lipa is carrying the trend into fall, too. She paired the knitwear style with a layered-up look, including a black leather jacket from Balenciaga, a Flintstones graphic tee, red pants, and a black handbag from Bottega Veneta.

It also seems like Lipa’s boyfriend Anwar Hadid (younger brother to Bella and Gigi) is into the crochet hat trend, as well, as he was seen sporting a checkered red-and-white version lined with neon yellow by Maisy Crawford, the London-based hat designer behind Cowgrl Crochets. He wore the accessory with an all-black ‘fit, featuring a knitted cardigan over a black tank, black pants, and an oversized glossy fanny pack.

This isn’t Hadid’s first time wearing the knitted hat and Lipa has been spotted wearing the same one, as well, according to one of her many summer outfits from August. Though the two, who have been dating since 2019, weren’t spotted together in London on Wednesday, they still served fashion #couplegoals yet again with their matching accessories.

Lipa is the queen of wearing crochet. In addition to her love of crochet hats, she was first seen posing in the cutest Care Bears crochet bikini from GCDS back in 2020 during lockdown. A few weeks ago, Lipa showed off her love for crochet once again in yet another tiny two-piece (also from GCDS). The British pop star shared a recent photo of herself posing by the poolside in the crochet bikini that featured designs, like a flower, a weed leaf, a rainbow, and a peek-a-boo heart on the backside.

Between vacationing at her home back in Albania and celebrating her birthday in the English countryside, Lipa is living her best and most fashionable summer, thanks to Lipa’s stylist Lorenzo Posocco. We may be nearing the end of summer, and Lipa’s aesthetic could start to shift for the fall, but, according to her latest look, that doesn't mean the crochet era is over. If anything, it’s only just begun.

NEXT UP
Culture
An Exhaustive Breakdown Of The Balenciaga Controversy
Fashion
Jimmy Choo’s Collab With Timberland Gives The Classic Boot A Glam Makeover
Culture
NYLON Party Report Card: Partying With The Stars & 94 Foot Long Whale At The Natural History Museum Gala
Culture
A Britney Spears-Inspired Musical Is Coming To Broadway