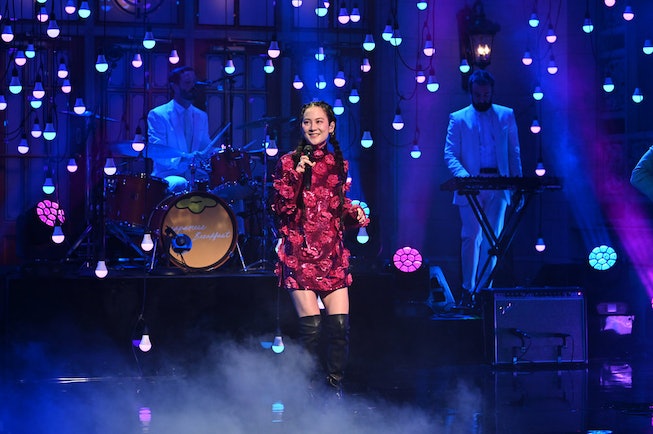 The finale of Saturday Night Live’s 47th season has already come and gone, with its latest episode being full of surprises. In its recently-aired episode on Saturday, May 21, the comedy sketch show confirmed that it will be losing four of its beloved cast members — Kate McKinnon, Aidy Bryant, Kyle Mooney, and Pete Davidson — following a slew of online rumors.

But it was hard to stay sad for too long as Japanese Breakfast was featured as SNL’s musical guest. With the finale hosted by actress Natasha Lyonne, the lead singer and the Crying in H-Mart author Michelle Zauner also made her cameo in the episode’s sketch “Women’s Commercial,” where she was seen helping out by singing a song to advertise a hair product called “gray adult pigtails” for “funky” older women.

Towards the end of the episode, the two-member band then performed their hit songs “Be Sweet” and “Paprika” from their latest 2021 album Jubilee. In her first performance singing “Be Sweet,” Zauner was seen wearing a shimmery pink mini dress from Valentino’s Fall 2022 collection, which came embroidered with roses. She kept it simple by styling it with a pair of thigh-high leather boots.

She then was later seen in Simone Rocha’s tiered white dress from its Spring 2022 collection for her live rendition of “Paprika,” striking a gong decorated in lights and flowers. She paired her last on-stage look with white combat boots and braided pigtails with matching white ribbons interlaced through them.

Ahead, check out the rest of our favorite celebrity looks from the past week, including Kristen Stewart’s boxers, Harry Styles’ striped jumpsuit, Ciara’s celebratory mini dress for Sports Illustrated, and more.

Arriving in Cannes on Monday, Kristen Stewart kicked off her film festival outfits with a super casual look, including a Chanel cropped T-shirt, cut-off denim shorts with her Fleur du Mal boxers showing, and black combat boots with white socks.

Storm Reid made an appearance at PacSun’s Downtown Los Angeles flagship store over the weekend to showcase her newest collection with the brand. The Euphoria actress wore an orange cutout bikini top with a multicolored blouse. She also styled her outfit with high-waisted denim shorts and white sneakers.

Ciara made an appearance on the red carpet of Sports Illustrated’s Swimsuit issue launch at the Hard Rock Hotel in Times Square over the weekend wearing a cutout black mini dress from LaQuan Smith with strappy sandals.

Just a day before the release of his second studio album Harry’s House, Harry Styles performed on NBC’s Today Show at Rockefeller Center on Thursday, May 19. The singer wore a striped custom jumpsuit inspired by JW Anderson’s Spring 2022 collection paired with black Vans.

Dixie D’Amelio was seen out to dinner with Burberry at Lucien in New York City wearing a pinstriped suited outfit with black loafers and a leather shoulder bag from the British brand.

For the premiere of her new show Pistol, Maisie Williams wore a look from Rui Zhou’s Spring 2022 collection.

On Tuesday, May 17, Lizzo made an appearance at the YouTube Brandcast 2022 event in New York City wearing a fiery red look, including a tie-dyed T-shirt paired with leather flared lace-up pants and platform boots.

Lori Harvey attended the screening of Final Cut (Coupez!) at the 2022 Cannes Film Festival in France donning a strapless Alexandre Vauthier Couture gown from its Spring 2020 collection, along with metallic pumps and diamond-studded jewelry from MESSIKA Paris.

During Gucci’s Cruise 2023 runway show hosted at Castel Del Monte, Italy, back on Monday, May 16, actress Elle Fanning sat front row wearing a white top with a black tie tucked into metallic pink trousers. She also wore a black blazer, platform boots, and a studded handbag, all from the Italian fashion house.