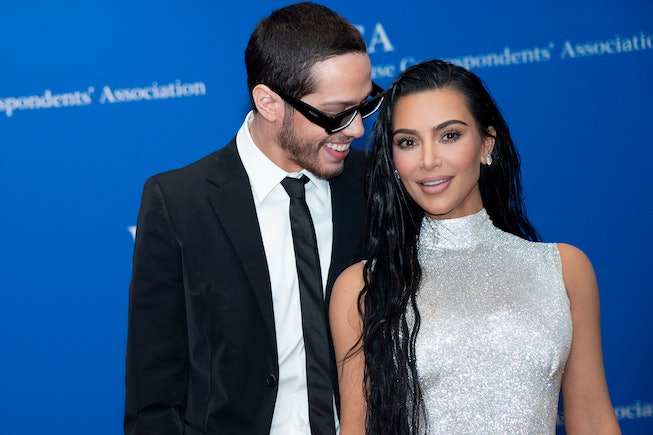 After debuting their newly-dyed platinum blonde hairdos a few weeks prior, Kim Kardashian and Pete Davidson prove once again that they are, in fact, still in love with a series of recent vacation photos. On Monday morning, Kardashian took it to Instagram to post about their trip to a secluded beach while donning matching outfits — because are you really a couple if you don’t?

In the newly released imagery, Kardashian can be seen wearing a black bikini set from her coveted swimwear line by SKIMS. The TV star opted for a halter style paired with tied bikini bottoms and oversized black sunglasses by Balenciaga. In her Instagram Story, the business mogul can also wore black biker shorts with her swimwear while out of the water.

As for Davidson, the 28-year-old matched his girlfriend with a pair of black shorts, which were worn over brown briefs. The photos also show the comedian in a boat styling his trunks with a colorblock camp shirt, Prada sunglasses, and a trucker hat. If wearing matching outfits wasn’t #couplegoals enough, the Kardashian also posted a clip stepping into the clear blue ocean filmed by none other than Davidson, along with the caption, “He passed the content taking boyfriend test.” Ah, the things we do for love!

Ahead, check out the rest of our favorite celebrity looks from the past week, including Vanessa Hudgens in Schiaparelli Haute Couture, Megan Fox and MGK at the 2022 Tribeca Film Festival, Blackpink’s Rosé in a cutout gown, and more.

Issa Rae donned Rodarte and black strappy heels to the premiere of Vengeance during the 2022 Tribeca Festival.

Selena Gomez made an appearance at Hulu’s Only Murders In The Building FYC event in Los Angeles in a white poplin mini-dress from Prada, styled with Jenny Bird jewelry pieces and metallic Jimmy Choo sandals.

Over the weekend, Taylor Swift headed to the 2022 Tribeca Film Festival in New York City for the premiere of her short film “All Too Well” wearing Max Mara’s pinstriped set with red Prada loafer pumps and jewelry from Vrai and Ettika.

Megan Fox and Machine Gun Kelly were inseparable at the premiere of Taurus during the 2022 Tribeca Film Festival in New York City, with Fox donning a strapless red latex dress from Sportmax’s Fall 2022 collection with pointed silver pumps. By her side, MGK wore an all-white outfit and platform sneakers.

Actress Amandla Stenberg wore head-to-toe Chanel while attending the brand’s “Through Her Lens” luncheon at the 2022 Tribeca Film Festival in New York City.

Bridgerton star Simone Ashley was also in attendance at Tiffany & Co.’s opening gala. She wore a criss-cross blush-colored gown from 16Arlington with a peach feather jacket and dazzling heels.

Bella Hadid’s street style remains unmatched. While out in New York City, the 26-year-old model wore a matching Fendi set sourced from Treasures of NYC and worn with a white shirt underneath. She also carried a cream top-handle Fendi bag from its Fall 2022 collection and completed her outfit with Chloe heeled sandals, slouchy socks, layers of pearl necklaces, and black micro shades.

Blackpink’s Lisa attended Bulgari’s Eden the Garden of Wonders show in Paris wearing a striking yellow set from Pinkong and accessorized with jewels from Bulgari.