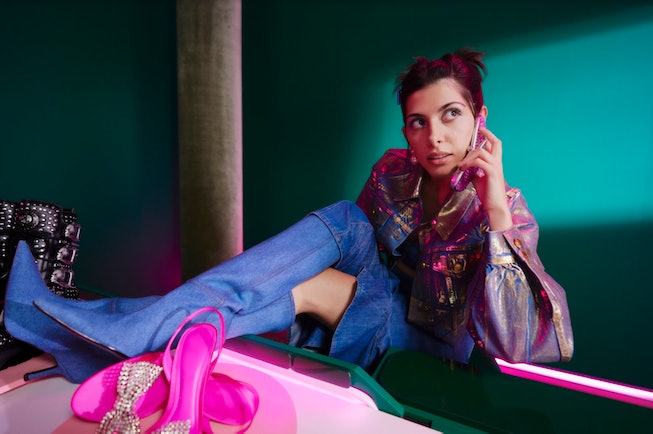 Looking back at 2022 now almost in its entirety, we can see there have been so many trends and aesthetics that have had their moment at lightning speed, it’s almost too hard to keep track. Acknowledging these countless ’cores, Klarna, a global shopping service, is introducing its first annual trend report this morning, fittingly named The Checkout. The report has identified five distinct global trends based on products global shoppers checked out of their shopping carts in 2022. Coming as no surprise to shoppers that have noted the return of all things retro, The Checkout found “nostalgia” to be the overarching theme of this year’s five distinct global trends: vintage tech, Y2K, hyperfemininity, counterculture, and regencycore.

Vintage tech, harkening back to the good old days of the dial-up internet era, increased for items like wired headphones, which increased in global sales by 317% in Feb 2022 compared to an average month 2021 according to Klarna’s shopping index. Flip phones also had a stand out moment, increasing by 81% in sales this August.

The report also confirmed the return of peak Y2K items like velour tracksuits (up 134% in sales in January), claw clips ( up 57% in June), and lip gloss ( up 83% in June, as well). Basically anything Paris Hilton loved in 2004, experienced another major moment in 2022.

Although the Y2K era had a strong presence across trends, the nostalgic thread ties back as far as the 18th century. Bridgerton fans should feel seen as regencycore was also among the core five trends. There was a sharp increase in sales of styles inspired by the Victorian and Regency periods, like corsets (up 117% in August), opera gloves ( up 56% in September), and pearl necklaces (up 32% in February).

Counterculture, rooted in ’80s, ’90s, and ’00s youth movements like Goth, Grunge, and Pop-punk, was also identified by The Checkout as a major themes of 2022. This manifested in the sale of skateboards, eyeliner, sheer tops, and chunky boots. Trend forecaster Agus Panzoni, who collaborated with Klarna on the report says this counter-cultural shift takes place against a backdrop of a changing world with changing priorities. “We’re talking about a reassessment of the things we value in life,” she explains. “It marks a break from the previous late 2010s girlboss and grind culture and now we’re trying to spend time with each other and reassess our values. This also impacts what we’re choosing to consume.”

The Checkout also identified another theme with political roots taking over this year—hyperfemininity. In the trend cycle, this looks like all the Barbiecore, bimbocore, and balletcore aesthetic videos on your TikTok For You page, but it’s actually a deeper reclamation of words, hobbies, and aesthetics that have often been used against women and queer people. “It's become much more about empowerment and not necessarily about femininity. It's much more inclusive than that,” says Panzoni. “We’ve reclaimed a lot of terms that used to harm us.” And it has manifested in an increased interest in pink products.

Through the data, it’s clear that the social and political climate have encouraged a large cultural priority reset since 2020, and 2022 has been the year where these changes significantly altered our shopping trends. Whether we’re yearning for the past with nostalgic trends (Panzoni also predicts the major return of Tumblr), or fighting against the mainstream with countercultural trends, there’s a feeling of rebellion against the current time, and this is only set to continue throughout the next year. “I think the theme for 2023 might be chaos,” says Panzoni.