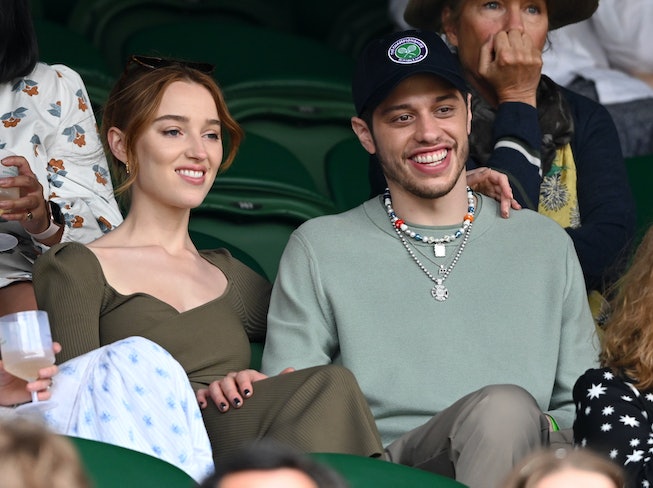 After months of speculation, Pete Davidson and Phoebe Dynevor have officially gone public as a couple while attending Wimbledon in London over the weekend in matching green looks. We have more on Dynevor’s outfit details, below, but we’re here to talk about how on point Davidson’s accessories game was at the match.

For starters, there’s the merch, as Davidson opted to show off his support in a Wimbledon cap that’s very much on-trend among celebrities these days. Then, there’s layered necklaces, which are loaded with sentimental meanings. First off, Davidson wore his late father’s FDNY badge in the form of a silver pendant, followed by a “PD” initial necklace that Dynevor actually owns herself, too. Finally, a custom piece by Ian Charms, one of the brands behind the summer’s most popular beaded and charm jewelry.

Not only does Davidson own a few necklaces by Ian Charms, the one he wore to Wimbledon gave a special shout-out to SNL’s own Lorne Michaels, which features a portrait of the famous showrunner in a framed pendant.

In case you’re curious about his clothing, too, it’s all from Theory, including an organic knit pullover and tailored pants that are still in stock (for now).

Ahead, check out of the rest of our favorite celebrity looks, including Rihanna’s pearl necklaces, Miley Cyrus’s custom Roberto Cavalli outfit, and more.

Rihanna turned to one of her favorite accessories (pearls — lots of ‘em) to dress up for dinner at Carbone in New York. She paired her layered necklaces, including a Vivienne Westwood pearl choker, with a black lace teddy from Vaquera, a vintage Gucci bag, and Manolo Blahnik pumps.

FKA Twigs and Sienna Miller stopped at Wimbledon and both opted for matching sets. FKA Twigs chose a white suit and printed top with a patterned bag, while Miller wore a Ralph Lauren striped top and pants with a mini white bag.

Miley Cyrus celebrated the Fourth of July with a performance in Las Vegas and a very patriotic get-up. The custom look — made up of a halter top and mini skirt featuring bedazzled motifs inspired by the American flag — hails from Roberto Cavalli.

Phoebe Dynevor proved that knitwear is still going strong even in the thick of summertime. The Bridgerton star attended Wimbledon in Self-Portrait, a brand that she once modeled for.

Lady Gaga has had a ton of strong looks in New York recently, but this custom-made look with statement sleeves by Christian Siriano, along with a custom Mark Cross bag that says “Love for Sale,” is our absolute favorite.

Lizzo brought us fashion and beauty. Not only did she show off bantu knots and bleached brows, but she also accessorized her hair look with Y2K’s finest: butterfly clips. For the ‘fit, she wore a bright blue knitted dress under a sheer shirt coat with white heels and a sparkling bag.

Ella Eyre took Wimbledon as her fashion inspiration, dressed in a neon green top and matching tennis skirt by Cinta The Label with a beaded blue Shrimps bag that she rented from Hurr.

Bella Hadid has been working hard in Paris and she’s serving plenty of style with her off-duty looks, including this stacked ensemble featuring an I.Am.Gia top underneath a collared shirt and blazer with Versace jeans, Salomon sneakers, and a Goyard tote.

Rosalía is a Jacquemus girl. She attended the label’s Fall 2021 runway show in Paris dressed in a nude mini dress with long sleeves with a matching bag and black lace-up sandals.

Jodie Turner-Smith arrived at the Zola premiere in Los Angeles wearing a canary yellow gown from Dundas and Gucci jewelry.

Of course, Riley Keough made an appearance for her film Zola, as well. The lead actress wore a Chanel look straight from the fashion house’s Fall 2021 runway collection.

Sadie Sink was decked out in head-to-toe Prada for her Fear Street Trilogy premiere in Los Angeles, which even featured Prada logo hair clips.