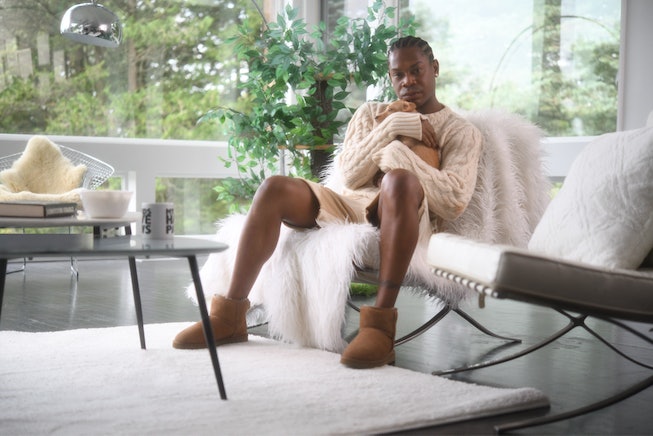 Not only is it UGG season, it is UGG x Telfar season. On Wednesday night, designer Telfar Clemens announced the new partnership, posting a photo of himself in a black and rhinestone-covered UGG T-shirt.

"I like the ubiquity," he told Vogue. "I like that they are unisex — and I like that it's a fashion item that is a Christmas gift for thousands of people. That's exactly what I'm into."

Ubiquity is not a novel concept for Clemens, whose award-winning Telfar Shopping Bags have surged in popularity over the past months. Still, the brand has remained steadfast in providing quality and luxury without the scarcity, offering a pre-order program in August that guaranteed anyone who wanted a bag would have one before 2021.

Prior to its partnership with UGG, Telfar was expected to have an ongoing collaboration with Gap, which had been put on hold due to COVID-19. In June, Gap announced a 10-year partnership with Kanye West's Yeezy, later adding that it had decided to not move forward with its previous commitment with Telfar. As Vivian Ward once said, "Big mistake. Huge."

Telfar's collaboration with UGG will, most likely, have a ton of demand. Plus, the Telfar ethos working in tandem with UGG's global reach should mean a better chance for fans hoping to get their hands on something.

"I find UGG really sexy — a soft kind of rugged," Clemens said in an official statement. "I have made unofficial, unauthorized UGG boots in two shows already dating back to 2010. So, I've always been obsessed with a certain kind of ubiquity and when something really unique ends up on everybody. What I want to do is get down to the DNA of UGG and see what genes we have in common. To get down to the core of that feeling."

The UGG x Telfar collection is expected to officially launch in 2021. Until then, check out the the video for the collaboration's campaign, starring Clemens himself and original music by Ian Isiah, below.