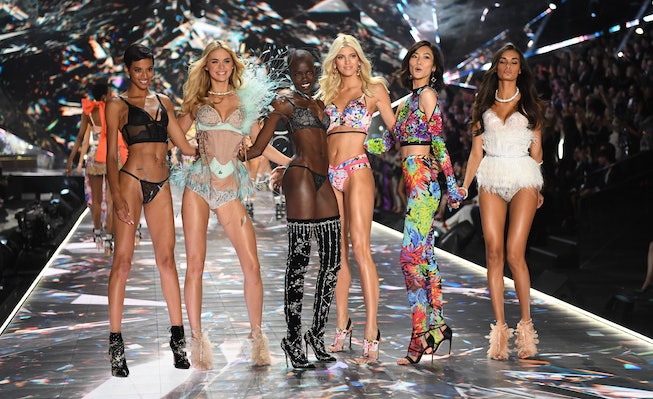 Victoria’s Secret is changing course. The brand announced its officially ditching its famous Angels and replacing them with accomplished women from a range of backgrounds. Megan Rapinoe, Eileen Gu, Paloma Elsesser, Priyanka Chopra Jonas, and more have been named as the new faces of the brand, ushering in a new era for Victoria’s Secret.

“As a gay woman, I think a lot about what we think is sexy, and we are afforded the ability to do that, because I don’t have to wear the traditional sexy thing to be sexy and I don’t think the traditional thing is sexy when it comes to my partner or people I’ve dated,” Rapinoe told The New York Times. “I think functionality is probably the sexiest thing we could possibly achieve in life. Sometimes just cool is sexy, too.”

For Elesser, joining Victoria’s Secret meant a better chance of making a change in the brand’s foundation from the inside. She’s currently advocating for more inclusive sizing up to a 5XL.

“I didn’t start modeling to just do all the cool stuff; I did it to change the world,” Elsesser told The New York Times. “With platforms like VS, where you enter the living rooms of all people, that’s where you make radical change.”

The widespread public controversy behind Victoria’s Secret, especially its annual runway shows, dates back to 2018, when Ed Razek, the (now-resigned) chief marketing officer of the company’s sister brand L Brands, said transphobic comments in an interview with Vogue. Since then the decline of the lingerie brand has ranged from resignations and financial woes to the brand rethinking (and eventually canceling) its Victoria’s Secret Fashion Show. A Hulu docuseries is now in the works to highlight the company’s rise to the apex of lingerie to its downfall.

NEXT UP
Fashion
The Best-Dressed Celebrities at Louis Vuitton's Cruise 2023 Show
Fashion
Prada Muse Hunter Schafer Lands Another Handbag Campaign
Fashion
Paloma Elsesser Launches First-Ever Plus-Size Collection With Miaou
Fashion
A Bra Top Could Be The Next Bridesmaid Style, According To Ariana Grande