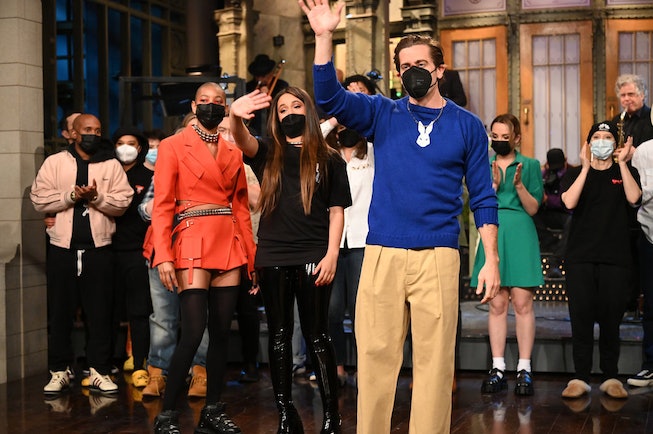 Another weekend flew by, but this time not without special appearances from Camila Cabello and Willow Smith. During the latest Saturday Night Live episode, hosted by Jake Gyllenhaal, the 25-year-old solo star returned as a musical guest, performing her newest track “Psychofreak” alongside Smith who was also featured on the single.

The duo took to the stage to sing the recently-dropped song, with Cabello wearing a black latex ensemble paired with red gloves. By her side on the guitar, Smith was seen rocking her signature pop-punk look, opting for cropped red blazer along with a matching skirt from Dion Lee’s Fall 2022 collection, along with thigh-high black stockings. Styled by her go-to sisters Chloe and Chenelle Delgadillo, she completed her on-screen ‘fit with a spiked belt and choker, along with black gloves. “<hoping> that I don’t drive off this hill,” the 21-year-old captioned her Instagram post shortly after the performance aired.

Willow Smith's latest SNL appearance marks her first public appearance since her father Will Smith slapped Chris Rock at the 2022 Oscars at the end of March, after the comedian made a joke about his wife Jada Pinkett-Smith. As of late, it’s been reported that the 53-year-old actor is banned from the award show for 10 years.

Ahead, check out the rest of our favorite celebrity looks from the past week, including Megan Fox in LaQuan Smith, Selena Gomez’s pink dress, Kourtney Kardashian in Valentino, and more.

The Crown’s Emma Corrin attended the 2022 Olivier Awards held in London over the weekend opting for a balloon-printed dress paired with a balloon-shaped bra and black leather boots from Loewe’s Fall 2022 collection.

Riverdale’s Camila Mendes was also seen at 2022 PaleyFest in Los Angeles wearing a leather mini dress with a white blouse from Hermès’ Fall 2022 collection, which she paired with Roger Vivier heels.

Rih is back at it again with yet another maternity outfit! While on a dinner date in Los Angeles, the Fenty mogul was spotted leaving Beverly Hills restaurant Wally’s rocking a silk floor-length shirt dress and striped shorts. She paired her going-out look with silver sunglasses and a dazzling crystal bag by Balenciaga, as well as a pair of crystal-covered Nike sneakers in collaboration with Cactus Plant Flea Market.

Just shortly after tying the knot in Las Vegas a few days prior, our favorite #Kravis couple was spotted at the premiere of The Kardashians in Los Angeles, with Kourtney opting for a two-piece black dress from Valentino’s Fall 2022 collection and Travis in an all-black outfit.

Camila Cabello was captured out and about in New York City ahead of her SNL performance wearing a sheer lace bustier, paired with checkered sorts and Gucci’s monogram blazer. She also wore the Italian fashion house’s pointed monogram heels with a matching choker.

Insecure’s Natasha Rothwell arrived at the Los Angeles premiere of Sonic The Hedgehog 2 in a puffed-sleeved mini dress from Selkie, which she wore with brown Dolce Vita heels. The actress and writer also dressed her outfit with a handbag from Brandon Blackwood, along with jewelry from Ten Wilde, Le Vian, and EP Fine Jewelry.

Mexican actress Eiza González attended the screening of Ambulance in Miami rocking a two-piece Prada ensemble with metallic heels and jewelry from Bvlgari.

During a special screening of The Northman in London back on Tuesday, April 5, Anya Taylor-Joy channeled her inner ice princess wearing a crystal-embellished Dior couture mini dress and sparkly heels.