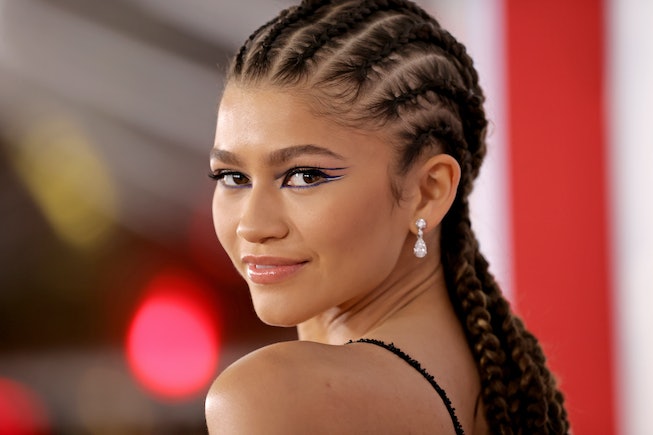 When it comes to the red carpet, we can always count on Zendaya to come through and last night was no exception. On Sunday, Feb. 27, right before the highly-anticipated and heart-wrenching season finale of Euphoria on HBO Max, the actress posted her latest look on Instagram for the 2022 NAACP Image Awards: a strapless green-and-red gown from Balmain. The new red carpet ‘fit was vintage, specifically from the brand’s 1956 collection, and handpicked by none other than Zendaya’s go-to stylist Law Roach. She completed her look with simple diamond jewelry pieces, including a pair of earrings from BVLGARI.

In a post made by Roach himself, he wrote, “And then THIS happened…. @zendaya in vintage @balmain for @naacpimageawards a thank you @olivier_rousteing for letting us into the archives ❤️💚🖤 Could there have been a more perfect dress???”

“ZENDAYA divine in Balmain gown from 1956 ♥️ l’élégance intemporelle de notre atelier 🖤Thank you for showing the beauty and the elegance of our house” added Rousteing, Balmain’s creative director, on Instagram.

This wasn’t the first (or the last) time we’ve seen the Euphoria star rocking vintage. During the show’s Season 2 photo opp back in January, Zendaya wore a vintage Valentino dress from its Spring 1992 collection, previously worn by supermodel Linda Evangelista. Just a month before, she was seen in a custom Valentino dress to the Spider-Man: No Way Home premiere, which was inspired by John Galliano’s Spring 1997 design. She also was spotted on the red carpet in November donning a black gown from Roberto Cavalli’s Fall 2000 collection for the film’s premiere, as well.

Ahead, check out the rest of our favorite celebrity looks from the past week, including Rihanna’s going-out dress from Gucci, Dominic Fike in Saint Laurent, and more.

Shortly after dyeing her hair copper red for Milan Fashion Week, Kendall Jenner was spotted making her next stop in Paris wearing a black midi dress with a matching cardigan, which she styled with knee-high leather boots, mini sunglasses, and a black-and-brown shoulder bag.

While out in New York City, Dua Lipa was captured wearing a hot pink shirt with wide-legged black pants. She then styled her outfit with a graphic-printed leather coat, black boots, and sunglasses.

In Brooklyn, Kilo Kish made an appearance at the 2022 On Air Fest for Sing For Science’s live podcast recording. The artist, who wore Batsheva for the event, is set to launch her upcoming album at the end of March and recently released her second single “No Apology!”

Julia Fox is making her way up as a must-watch style star and it seems that leather is her signature. The Uncut Gems actress was seen in New York wearing a black mini dress paired with thigh-high boots and a long leather jacket. She also wore dangling gold earrings and a matching black handbag as a final touch.

Pregnancy has never looked as good as it does on Rihanna, and for Milan Fashion Week, the Fenty mogul (and her unborn child) made quite the appearance as she was seen in a see-through vintage Gucci monogram dress, which she styled with the brand’s beaded bag and Gianvito Rossi custom lace-up sandals. Rih then completed her going-out look with jewelry from Munnu the Gem Palace, Jacquie Aiche, Lang Antiques, and Orlov.

On Friday, Feb. 25, our favorite pop-punk couple Travis Barker and Kourtney Kardashian were spotted in Los Angeles hand-in-hand after the Avril Lavigne concert. Barker opted to go topless on their night out, wearing only low-rise black pants, which showed off his “Mastermind” boxers and his go-to pair of Doc Martens. By his side, Kardashian wore a black velvet mini dress with batwing-style sleeves and knee-high boots.

Euphoria star and singer Dominic Fike made an appearance on the Tonight Show Starring Jimmy Fallon on Thursday, Feb. 24, wearing a black suited look with a white top and black boots from Saint Laurent by Anthony Vaccarello.

The Batman press tour is finally upon us and Zoë Kravitz was seen on the red carpet in London this past week donning a black halter maxi gown from Saint Laurent by Anthony Vaccarello, which came with scallop cutouts at the chest. She completed her look with pointed black pumps and simple jewelry pieces.

While on the way to the set of Jimmy Kimmel Live, Tinashe was spotted wearing Roberto Cavalli’s tattoo-printed bustier top and pants set. She then paired her look with a Death by Dolls denim-and-fur trench coat and sandals by Giuseppe Zanotti.