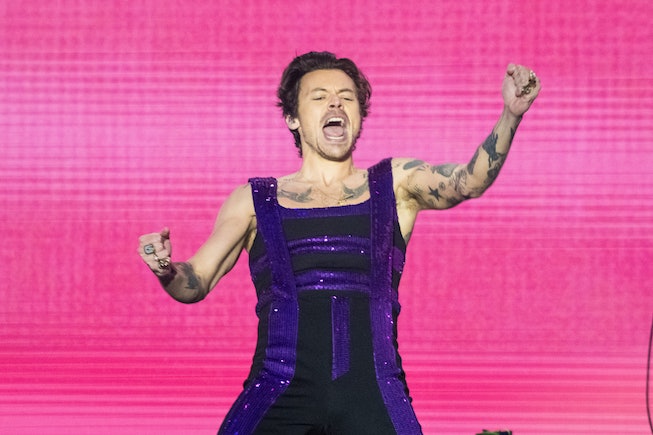 From the cover of Better Homes and Gardens to a 30-night tour, Harry Styles is having quite the year. Now, the star is being christened by the hallowed halls of academia, namely Texas State University, who is validating the star’s cultural influence with an entire class on him. Styles fans will soon be able to quantify their boundless love for the star with college credit.

“Harry Styles and the Cult of Celebrity: Identity, the Internet, and European Pop Culture” will focus on the “cultural and political development of the modern celebrity as related to questions of gender and sexuality, race, class, nation and globalism, media, fashion, fan culture, internet culture and consumerism,” according to a flier for the class shared by Professor Louie Dean Valencia. The class will be taught in Spring 2023.

There is a lot to mine when it comes to Styles, who gets a lot of attention for being a boy band singer successfully turned rockstar, as he equally does for his subversion of gender which has inspired many a man to dawn a dangly earring. It’s not everyday a kid can go from X Factor boy band sweetheart to Mick Jagger comparisons, and it’s certainly not everyday that one man can inspire a cardigan to go viral, let alone become an NFT.

"I can't tell you how many conversations I've had with students over the last two years that started with a shared love of Harry's music, but that quickly went into larger societal questions about gender, sexuality, race, sustainability because of Harry's art," Valencia told CNN. "Self-expression, and comfort with oneself, is a big part of Harry's message — along with treating people with kindness. A lot of people, myself included, feel like they've grown up with him — and so there is a connection."

The class will cover One Direction to his solo works, his acting roles, as well as the art that’s inspired him, including Susan Sontag and philosopher Alain de Bottom, Valencia added.

Styles isn’t the only celeb with a syllabus dedicated to them. His rumored ex Taylor Swift has also been exalted to academia, in a course that was taught at New York University this past fall by Rolling Stone writer and noted Swiftie Brittany Spanos. Swift was invited to the class, but did not attend, though she did give NYU’s 2022 commencement speech. It’s unclear whether or not Styles will be making a trip to Texas, but fingers crossed.