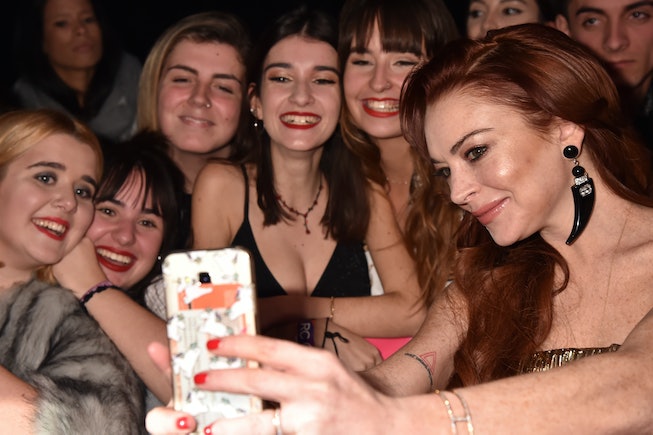 There comes a time in most celebrity’s lives when they wake up one morning and think to themselves, “You know what? I’m going to start a podcast.” And the latest to catch the podcasting bug is none other than Lindsay Lohan.

A Lohan podcast could easily be on of the greatest media enterprises on earth, or turn out to be one of the most confusing artistic endeavors of the times. No one can say Lohan hasn’t lived her life! In fact, she’s lived thousands of them. She been a Disney protegé, a party girl, claims some of the most alluring mugshots in Hollywood, is a legend on the Greek island of Mykonos, and has a deep reverence for the Islamic faith. Specifics on the podcast like topics, segments, or guests are still under wraps, but according to Studio71, Lohan will “share her authentic voice” through the podcast and listeners will “get the chance to experience a never-before-seen side of the megastar.”

“I’m excited to partner with Studio71 in the development and production of my podcast,” Lohan said in a statement. “I’m looking forward to connecting with more fans and having intimate conversations with friends and thought leaders across all industries.”

Lohan recently entered the world of cryptocurrency and NFTs with her own, auctioning off a “fursona” of herself, much to the chagrin of the furry community. Back in 2020, she released her single “Back To Me” a self-love anthem about “rediscovering and accepting oneself, shutting out the noise and moving forward and letting the past go."

Lohan also participated in the very 2020 phenomenon of nostalgic cast reunions, and joined a Katie Couric-moderated chat with The Parent Trap cast. "That's one of the most talented people I've ever met, period. Forget that she's 11 years old," Dennis Quaid recalled of Lohan’s early acting chops. "Within two or three minutes [of Lohan's screen-test], we both knew she had the part," he said. Lohan, on the other hand, recalled feeling worried: "I was so young and it was just so fresh to me. It was my first movie audition, my first screen-test, my first time in front of people like Nancy and Charles on a soundstage."

Lucky for Quaid, as well as Lohan fans worldwide, the actress will be heading back to the screen to star in a forthcoming Netflix Christmas special. The untitled film follows Lohan’s character who, according to Variety, is a “newly engaged, spoiled hotel heiress” who upon suffering amnesia from a skiing accident (as heiresses are wont to do!) finds solace in a “handsome blue-collar lodge owner and his precocious daughter in the days leading up to Christmas.” Let the Lohan comeback era commence!