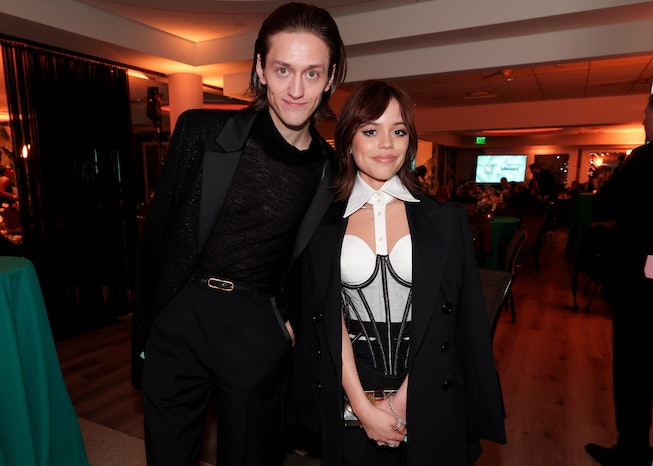 Jenna Ortega may not have won the Golden Globe for Best Actress in a TV Musical or Comedy for her role as Wednesday Addams in Wednesday, Tim burton’s Addams Family Netflix spinoff that’s taking the world — particularly the TikTok dance world — by storm, but she was still one of the biggest stars of the night. (And of course, she will always be a NYLON It Girl.)

Ortega gave a major nod to her character in her Golden Globes afterparty outfit. That is, if Wednesday Addams lived in Olivia Rodrigo’s America: Ortega wore a white corset top with black mesh piping, a white collar and a suit jacket for a classic, sexy look with a Gothic twist.

Ortega particularly stunned because many celebrities didn’t bother to change outfits for the after party — perhaps because the ceremony ran 1.5 hours overtime. And as Mike White pointed out in his drunken acceptance speech for Best Miniseries or Television Film for The White Lotus, they ran out of food early on.

Prior to the afterparty, Ortega dazzled on the red carpet in a Grecian-inspired nude Gucci dress complete with criss-crossing ab cutouts, making her one of the best-dressed stars of the night. The look was also quite the departure from the preppy goth style of Wednesday Addams, a style icon in her own right who certainly inspired a Golden Globes look or two. (Looking at you, Daisy Edgar-Jones and Jamie Lee Curtis.)

Ortega also showed off a new haircut, rocking a layered shoulder-length wolf cut with curtain bangs — a shaggy chic departure from Wednesday Addams’ double braided pigtails. Hair stylist Dave Stanwell gave Jenna the haircut prior to her December 16th appearance on The Tonight Show where she debuted the chop.

And despite Ortega not winning, hordes of celebrities were lining up to meet her. According to Cosmopolitan, actors were forming lines clamoring to meet the young star — and she chatted with everyone from fellow Best Actress nominee Selena Gomez to Anya Taylor-Joy to Margot Robbie.

2023 is already proving to be a big year for Ortega. In March, the scream queen will star in Scream 6 where Ghostface will stalk her in New York City.