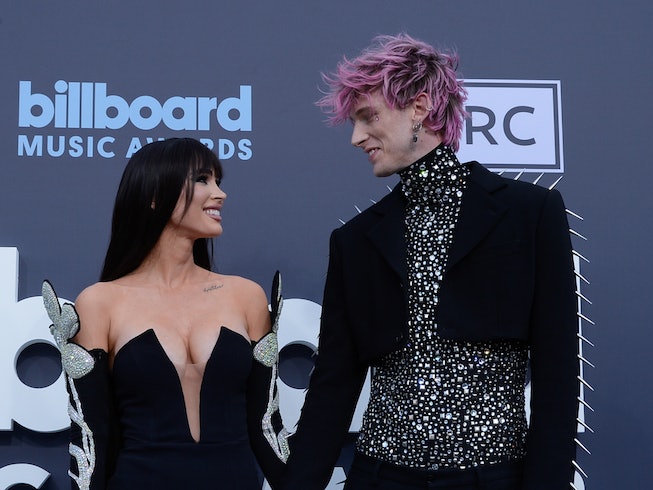 Whether or not you’re a fan of their PDA, there’s no denying that MGK and Megan Fox keep their relationship interesting. Megan herself believes she “manifested” MGK when she was only four, the couple has recently confirmed that they drink each other's blood, and they’ve even ruined a jumpsuit in the heat of the moment. Now, rumors that they’ve gone from engaged to married secretly have been circulating after the pop-punk artist dedicated his Billboard Music Awards performance of his song, “Twin Flame”, to the actress by calling her his “wife”.

On May 16 the duo has yet again got people talking by posting a matching tattoo reveal. A carousel post on MGK’s Instagram, dedicated to Megan Fox’s birthday featured a selection images including a mirror selfie, a snapshot riding Space Mountain in Disneyland, pink voodoo doll plushies, and identical voodoo doll tattoos on the couple’s left ring fingers. “wishing the happiest birthday to my ethereal light being. i love you maki 🔪❤️🕯🕯,” MGK captioned the post.

After being known for their iconic couples style, which once included matching pink snakeskin-hued manicures with a silver chain linking their pinkie nails together, the couple made sure to both have fresh painted and coordinated nails for the tattoo reveal. Megan opted for long, pointy baby blue acrylics, while MGK chose purple glitter. Seeing as the punk pop star has his own genderless nail polish line, UN/DN LAQR, and just sported a $30,000 diamond manicure to the 2022 Billboard Music Awards, we can expect that this nail polish influencer is onto a new trend.

While the couple is yet to comment on the wedding rumors, it’s clear their witchy ritual-filled romance is continuing to reach new heights. There’s also no doubt that this won’t be the last surprise they have in store for us— always accompanied by some new couples manicure inspiration along the way.