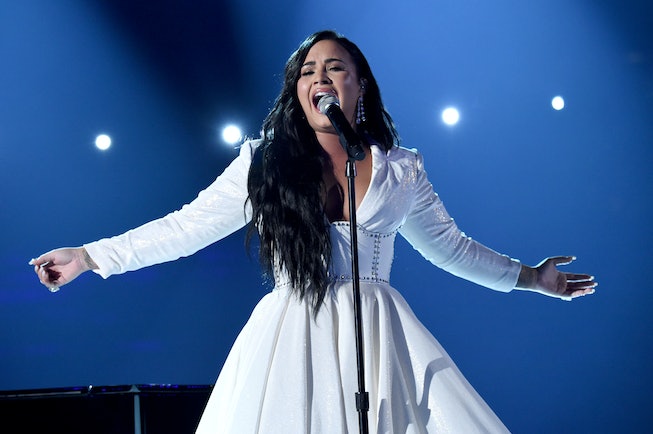 Photo by John Shearer/Getty Images for The Recording Academy)

Demi Lovato has had her fair shares of ups and downs throughout her career. Earlier this year, she went hyper candid about the downs, going on The Ellen DeGeneres show to discuss her history and battle with her eating disorder. This type of openness from celebrities of her caliber is extremely rare, but Lovato has made it a point to be honest about the realities of fame and celebrity, regardless of the perceived risk to her career. It's also gotten her the co-sign from a similarly frank celebrity, one Jameela Jamil.

The two are old friends, having met back when Jamil was a radio host and Lovato was a teen. Jamil — who has made a reputation for herself for being outspoken against Hollywood's preference for thinness and critiquing the Kardashians for sport — was deeply inspired by Lovato's dedication to honesty.

“She is revolutionary in how open and forthcoming she is with her truth,” Jamil commented to Bustle for the publication's new piece on Lovato. “It comes at huge cost and risk; once you open the door into your personal life, people feel entitled to you. And people project this savior complex onto you, which is impossible to maintain."

“She takes on so much scrutiny and does it boldly in the name of making sure her fans aren’t harmed the way she was growing up,” Jamil continued. “Nobody else has done what she’s done. I can’t stress it enough when I tell people she’s a big part of where I drew strength to really start speaking my mind.”

In the quest to "speak her mind," Jamil's name has become synonymous with public call outs and blunt honesty about her personal life and beliefs. In addition to calling the Kardashians "double agents of the patriarchy," she's gone after anyone publicly shilling detox teas, came out as queer on Twitter after receiving backlash against her judge gig on the voguing competition show Legendary, and spoken out about her many health ailments.