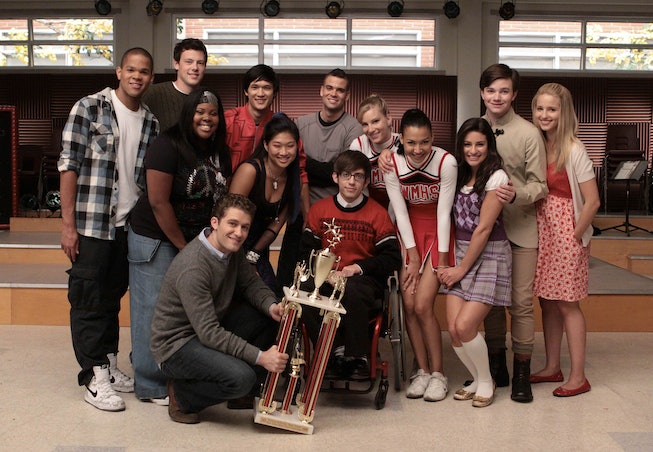 Yesterday, on an episode of The Michelle Collins Show, former Glee star Chris Colfer was asked about his thoughts on the current Broadway production of Funny Girl. Right now, the musical is enjoying tons of renewed interest thanks to the recent recasting of Fanny Brice, from Booksmart star Beanie Feldstein to Emmy nominee Lea Michele, who Colfer used to work with on Glee. “Oh…my day suddenly just got so full,” he responded when the talk show host suggested he accompany her to a showing. When she followed up by asking if he had any plans to see the show while he was in town, Colfer responded, “No, I could be triggered at home.”

The harsh response from Colfer won’t be too surprising for anyone even tangentially aware of the behind-the-scenes drama on Glee. An undeniable hit for Fox during the six seasons it ran from 2009 to 2015, the Ryan Murphy-created musical comedy-drama was beloved by fans for its campy excess, pitch-perfect performances, and seemingly endless supply of covers of mashed-up pop songs. But the series was also known for its rumored toxicity — whether it was drug problems, mental health issues, or as hinted by Colfer’s refusal to see his old co-star living out her performance dreams on a Broadway stage, Lea Michele’s reputation for being a bully.

And now, all of that drama will be laid out on the table and analyzed in the form of a new three-part docuseries. Set to premiere on Discovery+, the currently untitled series “will address the controversies surrounding the series” and “lift the curtain to reveal the highs and lows of the production and the on-set community,” according to Deadline.

The announcement also makes it seem like nothing will be off-limits, with Michele’s behavior, Cory Monteith’s death by heroin overdose, Naya Rivera’s tragic boating trip death, and even Mark Salling’s child pornography scandal (and subsequent death by suicide) all listed as being up for discussion. Ample Entertainment, the production company behind HBO docuseries The Invisible Pilot, have already obtained “access to key cast and crew members, who will share first-hand stories of their time on the comedy drama series.” The upcoming docuseries “will also feature testimonials of close family and friends with never-heard-before stories.”

So, yeah. Prepare to be doused in scalding-hot tea whenever this premieres. As for when we can expect to see all of this, who’s to know. (Again, Discovery+ doesn’t even have a name for the project yet.) All we can know for sure is that Chris Colfer won’t be going to see Lea Michele in Funny Girl anytime soon — critics be damned. And you know what? That’s totally his right.