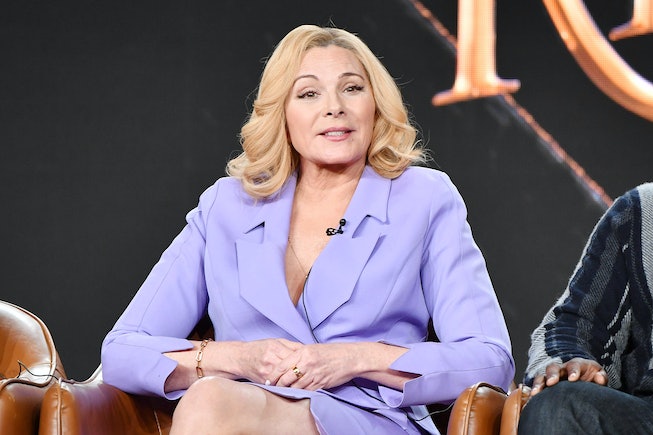 If you were still holding out hope that Kim Cattrall would maybe, possibly make an appearance in the upcoming confirmed second season of And Just Like That…, you can go ahead and squash all those dreams right now. For the first time since the so-bad-I-can’t-turn-away spinoff of HBO’s Emmy-winning game-changer Sex and the City was announced, the actress behind the show’s most beloved character Samantha Jones has spoken out about her departure from the franchise in a new cover story for Variety’s “Power of Women” issue.

First thing’s first: Kim Cattrall hasn’t even seen And Just Like That… “I certainly heard about it,” the five-time Emmy nominee told Variety, adding that “the greatest compliment I could have as an actor is to be missed.” But as to whether there is even the faintest, slightest, borderline infinitesimal chance that she might come back to reprise her most famous role to date? “That’s a no,” she said emphatically. “It’s powerful to say no.”

Oddly enough, despite And Just Like That…’s clear interest in making Samantha exist as a character in this new universe (even if only through Carrie’s phone), Cattrall was apparently never contacted about being in the reboot at all — though she isn’t so surprised. “I made my feelings clear after the possible third movie,” she said, referring to the misgivings she had about her character’s proposed storyline, which largely revolved around a dick pic that Miranda Hobbes’ teenage son Brady sends her. “I found out about [the reboot] like everyone else did — on social media.” (That she didn’t hear anything is equally unsurprising considering her relationships with the people involved. “I guess it’s how you define ‘friends,’” she said about her co-stars. “I think they were colleagues. My colleagues aren’t my friends. It was professional.”)

But it’s not like she cares anyway. “It’s a great wisdom to know when enough is enough,” she added about her decision to walk away from the world of Sex and the City in the first place. “I also didn’t want to compromise what the show was to me. The way forward seemed clear.” As for how it feels to see Samantha still “living on” in AJLT? “It’d odd, isn’t it?”

Promoting her recent role in Hulu’s How I Met Your Father and her upcoming role in Peacock’s Queer as Folk (ironically, both of which are reboots), Cattrall opened up about a lot in the wide-ranging, career-spanning interview. But naturally, we here at NYLON immediately did a Ctrl+F for anything Sex and the City-related.

The good news is that, despite feeling confident in her decision to leave the seminal character behind for good, Cattrall does still hold a special place in her heart for Samantha Jones. “I’ve left something behind that I’m so proud of,” she said. “I loved her. I loved her so, so, so much. It’s tough competition. The original show is in all of our imaginations.” The actress feels that “parts of [Samantha] are with [her]” even now, all these years later. “I felt ultimately protective of her,” she admitted.

“I would never want to look back on that [role] with anything other than pride. That I did that, that it existed,” the actress later said about playing the public relations maven. Responding to the idea that Samantha was a fan-favorite character that people seem to miss more than others, Cattrall said, “I’ve played so many different kinds of characters, you think — why that character? Why then?” In her opinion? “It was a time coming out of AIDS and making sex positive again.”

But Cattrall eventually knew it was time to leave well enough alone. The third film plot problem certainly played a role, but she’d been leaning in that direction anyway. On doing a reboot now, she said, “Can you imagine going back to a job you did 25 years ago? And the job didn’t get easier; it got more complicated in the sense of how are you going to progress with these characters?” Cattrall feels that “everything has to grow or it dies,” which is why she thought the original series finale was perfect. “I thought that’s smart. We’re not repeating ourselves. And then the movie to end all the loose ends.”

Variety’s cover story also features quotes from Sex and the City creator Darren Star, who revealed that Cattrall “turned down [the role of Samantha Jones] three times before finally accepting.” After starring in popular films like Mannequin and Police Academy, the actress “wasn’t interested in a TV series,” Star says. “I think the one thing I could have never guessed going into the role of Samantha in Sex and the City was just how funny Kim could be," he added. But now? “It’s impossible to imagine the show without her.” For Cattrall’s part, the reluctance was less about any specific debate about the merits of film vs. TV, and more about the demands of the character. “I didn’t think I could do it,” she said. “At 42, I really didn’t think I could pull it off.”

But, of course, she did — and did so flawlessly. Which is why it pains me to write, with full clarity, the following: Kim Cattrall will not be returning. Point, blank, period. The actress even found time to shoot down AJLT’s decision to have Samantha get mad at Carrie for firing her as her publicist by saying the manufactured plot development “feels different than the Samantha that I played.”

Alas, all hope is not lost — at least in terms of Cattrall’s involvement with another, different show sometime in the future. In the Variety interview, Kim Cattrall was asked what she’d be interested in doing as an actor that she hasn’t had the opportunity to do yet. “I’d like to do my own sitcom,” she answered. “I think that would be a lot of fun with an audience — playing a woman my own age. I have a very specific idea of what I want to do.” Sure, the show will most likely tap into the actor’s fascination with “what happens to women once they reach the top of their profession” in one way or another, but maybe her central character is also a sexually-empowered owner of her own PR company? Or is that intellectual property off-limits?

NEXT UP
It Girl
Madison Bailey Is Embracing The "Elegance" of Being in Her Mid-20s
A Night Out
A Night Out With Rachel Bilson
Culture
Phoebe Dynevor Will Not Return for Bridgerton Season 3
Culture
6 Shows To Binge Once You've Finished 'The White Lotus'
Style + Culture, delivered straight to your inbox.