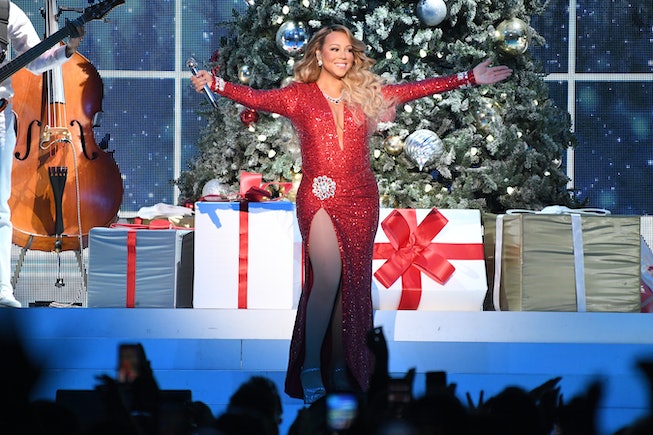 No matter who you are, it's near impossible to deny that Mariah Carey, celebrated singer, songwriter, and most recently, author, has been the reigning Queen of Christmas for a while. Every year, sometime around late October or early November, the recent Songwriters Hall of Fame inductee finds her way back to the top of the charts with "All I Want For Christmas Is You," a song she wrote 26 years ago that somehow hasn't aged a single day. It wouldn't be a stretch to say Carey is, at once, Santa Clause, Mrs. Clause, all nine reindeer, and the presents under your evergreen conifer tree. And this year, she will play host to her own star-studded Christmas special, which has been merrily named Mariah Carey's Magical Christmas Special.

Rumors that the singer had something big up her sleeve first began swirling in early October when she tweeted out a picture of three chairs, aligned side-by-side, bearing the initials "AG," "MC," and "JH." Unfortunately, the "MC" was not for me (Michael Cuby), but rather obviously for Mariah Carey herself. (Unsurprisingly, Carey, one of our nation's most beloved divas, put herself in the center.) But the other initials were more difficult to confirm. That didn't stop smart internet sleuths from doing some guessing of their own, though, and before long, many had deduced that the other initials probably stood for Ariana Grande (AG) and Jennifer Hudson (JH). Naturally, just the mere suggestion of a collaboration between three of the most powerful voices in music right now was enough to make the internet lose their collective minds.

Yet it wasn't until this morning that those rumors were officially confirmed. Yes, both Ariana Grande and Jennifer Hudson are slated to appear in Carey's holiday special, but according to an accompanying teaser for the upcoming project, so is Girls Trip's Tiffany Haddish, Billy on the Street's Billy Eichner, L.A. rap legend (and noted Martha Stewart acolyte) Snoop Dogg, producer extraordinaire Jermaine Dupri, American Ballet Theater principal dancer Misty Copeland, The Peanuts Gang, and Mixed-ish breakout Mykal-Michelle Harris.

According to reports, Mariah Carey's Magical Christmas Special will "center on a crisis at the North Pole that requires help from Santa’s great friend," played, of course, by Carey herself. Through a combination of musical performances and lively animation, the singer will help save the day alongside her stacked list of special guests. While we might have to wait until the special's December 4th release on Apple TV+ to find out whether one of these musical performances is a full trio collaboration between Carey, Hudson, and Grande, we can at least rest easy knowing that it would take a lot of sabotage to create something boring when Tiffany Haddish is involved. Because all I want for Christmas is Mariah Carey's Magical Christmas Special (and, hopefully, a collaboration between Mariah Carey, Ariana Grande, and Jennifer Hudson).

Check out the teaser and the poster for the upcoming special below.