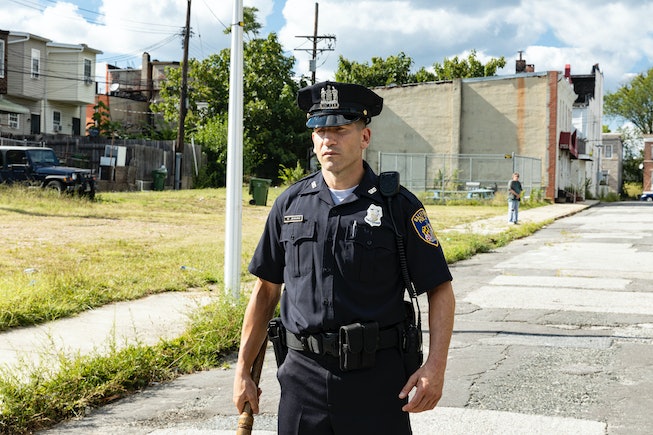 It’s been nearly two decades since HBO premiered the first episode of The Wire. Though the series was never received the way it should have been during its original run — it was nominated for only two Emmys, and lost both of them — it has endured a long shelf-life as a best-of-all-time drama, continuing HBO’s legacy as a regular distributor of Hall of Fame-level content and turning its creator, David Simon, into a bona fide television celebrity in the process.

Simon’s relationship with HBO has been set in stone ever since then — he’s gone on to to create many new shows for the network, including recent criminally-underrated gems The Deuce and The Plot Against America — and this month, he’ll debut another project for the cable channel: We Own This City, which has just released its first trailer.

Like the majority of David Simon’s best work, We Own This City focuses on three things the prolific writer/producer knows best: crime, police, and the city of Baltimore. Based on Baltimore Sun reporter Justin Fenton’s memoir We Own This City: True Story of Crime, Cops, and Corruption, Simon’s latest drama “chronicles the rise and fall of the Baltimore Police Department’s Gun and Trace Task Force and the corruption and moral collapse that befell an American city in which the policies of drug prohibition and mass arrest were championed at the expense of actual police work,” according to a plot synopsis.

Set to debut on Monday, April 25, We Own This City boasts an incredibly talented roster, even beyond Simon’s involvement. All six episodes of the upcoming miniseries will be directed by Reinaldo Marcus Green, who is on a hot streak after directing Will Smith to his first Oscar win in the Williams sisters biopic King Richard. Green will next step behind the camera to direct the highly-anticipated Bob Marley biopic (which, yes, has been blessed by the Marley family estate).

The project marks a reunion for Green and King Richard heartthrob Jon Bernthal, who plays central cop Wayne Jenkins. (That he still looks so attractive despite playing a police offer does not bode well for me personally, but I digress.) Bernthal is on a bit of a hot streak of his own. In addition to King Richard, the actor’s very booked-and-busy 2021 included appearances opposite Angelina Jolie in Those Who Wish Me Dead, opposite Sandra Bullock in The Unforgivable, and opposite everyone in The Sopranos prequel film, The Many Saints of Newark. Earlier this year, he played a Hot Horny Dad in Lena Dunham’s film comeback Sharp Stick, and later this year, he’ll star in the Showtime spinoff of Paul Schrader’s American Gigolo.

The series is arriving at just the right time — at least for those of us who have been wondering when the next Simon x HBO project would materialize. The multi-hyphenate is coming off a hot streak of critically-acclaimed but little-seen dramas for the network. In 2017, Simon premiered The Deuce, a riveting look at the rise of the porn industry in Manhattan, New York and the rare Simon production to abandon the mean streets of Maryland for the gritty glitz of Times Square. (Alas, any excitement associated with that premise was quelled by the onslaught of reports about the unsavory acts of its central star, James Franco.) And two years ago, Simon followed that up with The Plot Against America, which told a fascinating story about the rise of fascism right as discussions about its parallels to Trumpian politics began to take hold of the media cycle. I don’t doubt We Own This City will inspire similar conversations when it premieres.

Check out the trailer for We Own This City below.

We Own This City premieres April 25 on HBO and HBO Max.