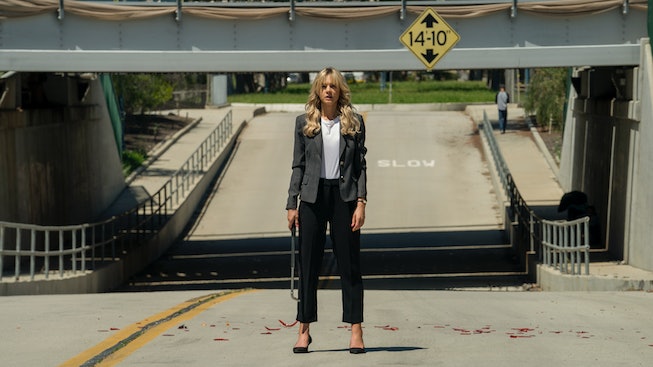 This morning, Film Independent announced the nominations for their 26th Annual Spirit Awards — which, like every other 2021 awards ceremony, will air much later into the year than usual.

As far as precursor award shows go, the Film Independent Spirit Awards are hit-or-miss when it comes to predicting which films will go on to win it big at the Academy Awards. Sometimes, they nail it — as was the case in 2017, when future Best Picture and Best Adapted Screenplay winner Moonlight won in the corresponding categories at the Spirits, or in 2018 and 2019, when Frances McDormand won Best Actress for Three Billboards Outside Ebbing, Missouri and Regina King won Best Supporting Actress for If Beale Street Could Talk, respectively.

Other times, however, the Spirits award films that should be winning Oscars, but sometimes aren't even acknowledged by the Academy. Most recently, there were last year's wins for The Farewell as Best Feature and Uncut Gems' Adam Sandler as Best Male Lead, neither of which even secured nominations during the subsequent Oscar season, despite being well-deserved.

As we all know, this year's awards season will be unlike any before. The Academy Awards have already been postponed, as have the Golden Globes, and due to nationwide theater closures, films that may not have otherwise even been eligible for either are now able to compete for Hollywood's top honors. With so much about the upcoming Oscars ceremony already poised to diverge from years past, I can't help but also wonder: why can't nominations reflect that change as well?

For the Spirits, amongst the usual Oscar-bait suspects (Nomadland is still dominating, surprising absolutely no one), there were a few nominations for films and film performances that I think should be getting more legitimate Oscar attention but have not. Below, four tips members of The Academy could (and should) take from the Spirit Award nominees:

One of the genuine surprises to come out of the recently-aired Gotham Awards was a Best Actress win for Miss Juneteenth's Nicole Beharie. (Even Beharie seemed in complete shock!) Beating out presumptive frontrunner Frances McDormand (Nomadland), Beharie's win was a welcome one, helping to shine a light on a criminally underrated film that I've been praising since its June release on VOD last year. There are many things to love about director Channing Godfrey Peoples's feature debut, but chief among them are Beharie's breakout performance as Turquoise, a young mother desperate for her daughter to win her town's Miss Juneteenth pageant and secure the college scholarship that comes along with it. Now, Film Independent has also bestowed its stamp of approval on the terrific performance, with a well-deserved nomination for Beharie in a packed Best Female Lead race — as well as other nominations for Miss Juneteenth in Best First Feature, Best First Screenplay, and in Best Supporting Female, for Alexis Chikaeze, who plays Turquoise's resistant teenage daughter.

The Best Actress Oscar race already seems packed with Nomadland's McDormand, Ma Rainey's Black Bottom's Viola Davis, Promising Young Woman's Carey Mulligan, Pieces of a Woman's Vanessa Kirby, and a possible late-entry from Malcolm & Marie's Zendaya, but The Academy would be remiss to ignore Nicole Beharie. Miss Juneteenth isn't the type of film usually acknowledged at the Oscars, but maybe in 2021, they can widen the playing field.

Promising Young Woman Would Be Nothing Without Emerald Fennell, Goddamnit!

With the next Sundance just around the corner, it's interesting to consider that Promising Young Woman premiered a full year ago, at least year's edition of the Park City festival. After earning rave reviews last January, the film was largely put on the back-burner until the last couple of months, when it was officially released during the 2020 holiday season. Now that it's out, lead actress Carey Mulligan has risen to the top of the heap as one-to-watch in the Best Actress race. Unfortunately, less attention has been placed on Emerald Fennell, the brilliant actress-cum-director who made her feature debut with this film, which I recently named one of the 20 films and TV shows that defined the chaotic year that was 2020.

Mulligan's praise is, of course, earned — she's tremendous as Cassie, the complicated protagonist at the center of the film, whose survivor's guilt following an unfortunate incident involving her best friend leads her down a thorny path of righteous revenge. But too often, people forget that a performance is only as good as the director who brings it out. And Fennell doesn't just bring out a career-defining performance in Mulligan; she places it in a cinematic world that's impossible to look away from. Promising Young Woman is a candy-colored fever-dream, using typically feminine aesthetics to enhance its tale of a woman undone by the harm inflicted on the world by so-called "good men." Without Fennell's deft hand to balance these seemingly opposing details — a "serious" film that deliberately forgoes all the aesthetic trappings usually associated with prestige cinema — this film simply would not work.

Thankfully, Film Independent acknowledged that precision with a Best Director nomination for Fennell, but it's very hard for me to imagine The Academy doing the same. While Chloé Zhao is almost guaranteed a nomination for her unstoppable Nomadland, the Oscar race for Best Director still largely seems like a Boys Club — David Fincher's Mank, Aaron Sorkin's The Trial of the Chicago 7, Lee Isaac Chung's Minari — with a possible shakeup in the form of One Night In Miami's Regina King. As The Academy continues to reckon with its decades-long tendency to ignore women directors, maybe now is the time to start changing the narrative.

Use Best Original Screenplay To Shine a Light On Smaller Films

Now, I'll start by admitting that The Academy does often use its Best Original Screenplay category to spotlight films that are ignored elsewhere: last year, Rian Johnson received his first Oscar nomination for penning the excellent Knives Out, while other small, beloved films like Yorgos Lanthimos' The Lobster, Mike Mills' 20th Century Women, Paul Schrader's First Reformed, and Emily V. Gordon and Kumail Nanjiani's The Big Sick have been nominated in recent years. (Also, Jordan Peele's Get Out won in 2018! We can't forget that monumental moment.)

That said, I think they could do even better. (I'm still not over The Academy's audacity to ignore Bo Burnham's fantastic First Grade in 2019, to say nothing of the snubs for Boots Riley's gleefully weird Sorry to Bother You and the all-female writing team behind the impossibly clever Booksmart.)

This year, the field seems relatively wide open, which is why it would be nice to see some nominations for smaller films. At the top of my list is Radha Blank's daring screenplay for her feature debut The Forty-Year-Old Version, which is both funny and insightful, and already won at the Gotham Awards. But I'm also rooting for Eliza Hittman's sensitive coming-of-age story about the impossible-to-navigate American healthcare system in Never Rarely Sometimes Always, Andy Siara's inventively mind-bending approach to the rom-com in Palm Springs, as well as Channing Godfrey People's informative but not didactic script for the aforementioned Miss Juneteenth.

Last year was a huge turning point for Asian cinema as the brilliant Parasite won a landmark four Oscars, including Best Picture, Best Director, and Best Original Screenplay. However, for a film clearly so beloved by members of The Academy, its actors were questionably shut out of the race entirely, nabbing nary a nomination. While Parasite was, indeed, a masterwork of both direction and screenwriting, it's silly to think that the film would have worked as well as it did had it not been for the many brilliant performances at its center. That its cast was ignored across the board revealed an unfortunate truth about The Academy's history of ignoring Asian actors.

So it was nice to see Film Independent acknowledge so many performances from Asian actors this year. There was Orion Lee, who stole every scene as King-Lu in Kelly Reichardt's First Cow, and Nine Days' Benedict Wong nominated in Best Supporting Male, while Adarsh Gourav snuck into the highly-competitive Best Male Lead race for the recently-released Netflix film The White Tiger.

I wasn't surprised to see Youn Yuh-jung acknowledged for her excellent work as a playful grandma in Minari, but after The Academy completely snubbed The Farewell last year (despite Spirit Award wins for Best Feature and Best Supporting Female for Zhao Shu-zhen, and a Golden Globe win for lead Awkwafina), I wouldn't be surprised if they conveniently forget about her come nomination time. Furthermore, I loved seeing Yuh-jung's co-star, Yeri Han, finally get the respect she's always deserved for her equally integral contributions to that amazing film.

This year is already primed to be a landmark year for Asian actors at the Oscars, particularly with Steven Yeun and Riz Ahmed pretty much guaranteed slots in the Best Actor race for their outstanding work in Minari and Sound of Metal respectively. (They were both nominated for Spirt Awards today, too.) But this could be pushed even farther if The Academy is willing to finally acknowledge that Asian actors exist (gasp) and have been doing extraordinary work in front of the camera for years. The time to spotlight these performances is now.