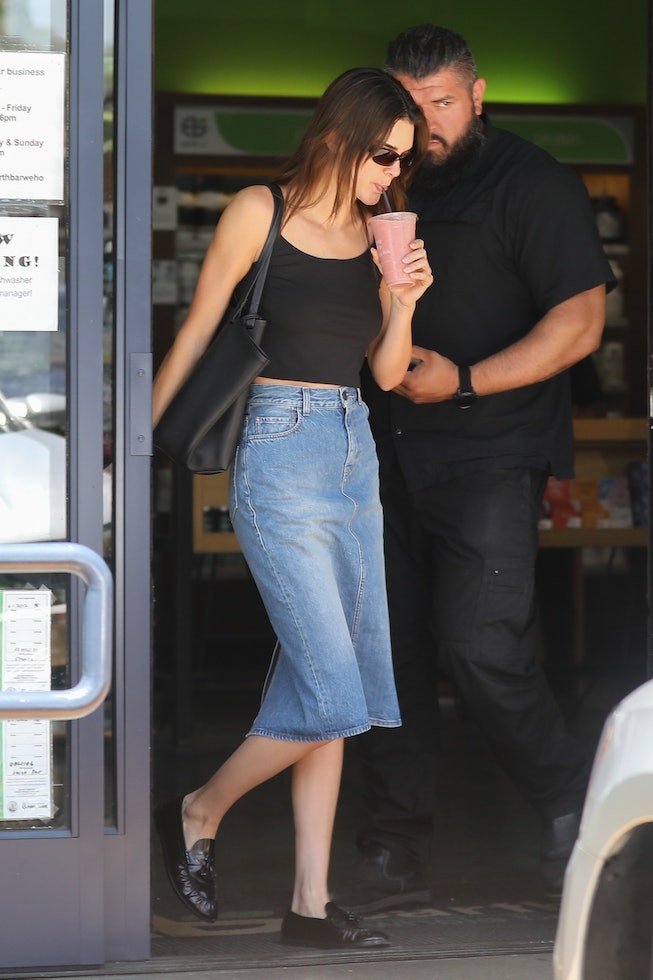 Over the past couple of years, the mini skirt trend has reigned supreme both on and off the catwalks but lately, our favorite style stars have been switching things up by swapping their itty bitty minis for something a bit more on the modest side.

On Monday, June 27, Kendall Jenner was spotted grabbing her afternoon smoothie at the celebrity-approved Earth Bar in West Hollywood. In a slew of recently-captured photos, the supermodel is seen inside the cafe holding onto a fan's furry Labrador puppy while waiting for her drink to be made in a black tank top paired with a chic denim midi skirt. She then wore her long denim skirt with black loafers, micro mini sunglasses, and a trendy black maxi tote bag.

Longer skirts are making their return on our fashion radars with celebrities co-signing the rising silhouette. Stars like Olivia Rodrigo wore the flowing skirt a number of times including her 19th birthday party back in February, while Bella Hadid and Dua Lipa have experimented with midi skirts well before this year. As we’re seeing the push for all things micro and mini, the maxi revival is proving to be just as cute of an alternative.

Ahead, check out the rest of our favorite celebrity looks, including Joey King for Jimmy Kimmel Live, Lizzo’s beaded mini dress, and more.

#EssenceFest dominated our feeds this past weekend and our favorite stars were in attendance including actress and producer Issa Rae. During the first day at the event, the Insecure star wore a vibrant orange set with a matching bralette and white sandals.

On June 29, Gigi Hadid was captured walking around New York City going full on casual outfit. She wore an oversized white button down with a graphic tee, paired with cutout straight jeans and platform Converse sneakers. The supermodel completed her off-duty look with a cream handbag and mini sunglasses.

Over on the West Coast, Paris Hilton attended the Dreamscape event hosted by her family’s Hilton Estates Group in Los Angeles wearing a cottagecore-inspired floral gown from House of CB dress styled with a baby blue croc mini bag and pointed metallic pumps. She also wore jewelry from House of Emmanuele and pink frames from Isea Sunglasses.

Selena Gomez sparkled at the Season 2 premiere of Only Murders in the Building in Los Angeles on Monday, June 27. Styled by Kate Young, the multifaceted star wore a silver asymmetrical gown from Michael Kors paired with Effy jewelry pieces.

OG Gossip Girl actress and singer Taylor Momsen participated in a conversation with Nicole Ryan at 92NY in New York City rocking head-to-toe black, including a black tee with leather pants and platform boots. She then finished off her edgy look with a brown leather jacket, layered silver necklaces, and a black choker.

On Tuesday, June 28, Tracee Ellis Ross arrived at her very own launch dinner for her haircare brand Pattern Beauty in London. The actress stunned in a yellow silk gown from Cong Tri’s Fall 2022 collection and chunky gold earrings.

Selling Sunset’s Christine Quinn was seen at Marc Jacobs’ Fall 2022 runway show in New York City wearing a matching set from the brand with an oversized blazer and knee-high boots. Quinn dressed up her outfit with Marc Jacobs’ Snapshot bag and black Vehla sunglasses as well.

Bella Hadid was seen out-and-about on a rainy day in New York City last week wearing a white baby tee with low-rise patchwork jeans and white boots. She also opted for a navy varsity jacket and mini sunglasses, with her wired earphones dangling from her hand.

In her latest cameo for Jimmy Kimmel Live, Joey King was also seen heading to the studio wearing a snake-printed midi dress by Greek fashion label milkwhite. Her look was styled with a beaded lime green halter top and black platform heels.

Janelle Monáe was also in attendance at Atlantic Records’ 2022 BET Awards after-party. The singer wore a strapless black mini dress with mesh heels and a drink in hand, of course.