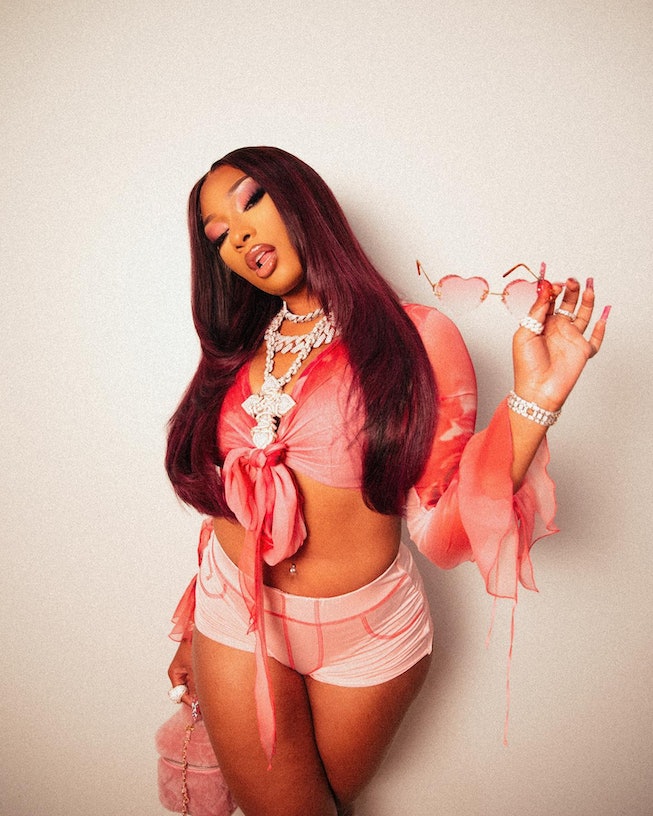 The #Barbiecore aesthetic is continuing its reign, both taking over our TikTok feeds and also our favorite celebrities’ wardrobes. Over the weekend, the super-pink trend happened to land this time on none other than Megan Thee Stallion.

The Houston baddie uploaded her latest #OOTD, styled by Zerina Akers, on Instagram over the weekend, showing off an entirely new look in head-to-toe pink. In a series of new photos, the Good News rapper sported a mesh cropped top with florals from Blumarine. The musician tied the blouse at the chest, baring her midriff while her newly-debuted red hair cascaded over it, layered in the trendy “chin-bang” haircut. She then paired her itty-bitty top with a pair of pink micro-mini shorts and slipped on dazzling bejeweled heels. She completed her Barbie-inspired outfit with a fuzzy Chanel bag, showcasing her latest lipstick-shaped nail design, added her go-to diamond-studded chains and Cartier jewelry for some bling, and finished her look with a pair of Y2K-inspired pink sunglasses.

Megan Thee Stallion’s fashion takeover has well been underway, especially over the last couple of months. Earlier in June, the “Body” singer was spotted alongside Chloë Sevigny, Bella Hadid, and Lourdes “Lola” Leon for Mugler’s digital showcase for its Spring 2022 collection, rocking a trendy cutout blue catsuit. In May, she was also spotted sitting front row at Balenciaga’s Spring 2023 runway show in New York City, rocking an all-black ‘fit. We’re definitely bound to get more jaw-dropping style moments from the rap star because honestly, what’s fashion without Meg at this point?

Ahead, check out the rest of our favorite celebrity looks, including Bella Hadid’s patchwork jorts, Keke Palmer in Marc Jacobs, Michaela Coel’s leather ensemble, and more.

While at the 2022 San Diego Comic-Con, Kesha promoted her new show Conjuring Kesha in a black latex top featuring cutouts at the bust. She also wore baggy black pants with slits at the legs and black sandals.

On Wednesday, July 20, Joey King made an appearance at Bullet Train’s photocall in London opting for Nensi Dojaka’s flower velvet mini dress from its Fall 2022 collection, with the ensemble coming with thin straps and a baring cutout at the bust. She then styled her look with sheer Wolford tights and platform boots.

Aubrey Plaza was also spotted at the 2022 ESPYs, wearing a white and silver halter gown from Et Ochs’s Resort 2023 collection and a dainty diamond necklace.

Supermodel Gigi Hadid arrived at Vogue and Self-Portrait’s celebration in London last week wearing a lime-green midi dress from the brand. She also kept it monochrome with a matching green micro-mini purse and matching colored sandals.

Ana de Armas made an appearance at The Gray Man special screening event in London rocking a custom-made metallic ensemble from Louis Vuitton, including a silver column dress dressed with a black belt at the waist.

Keke Palmer’s latest red carpet look has been getting quite the buzz over the past week. While arriving at the premiere of her new film Nope in Los Angeles, the actress stunned in a cropped corset top paired with a black low-rise column skirt and matching elbow-length gloves, coming straight off the runway from Marc Jacobs’ Fall 2022 collection. Styled by duo Wayman + Micah, the actress also wore the brand’s coveted platform Kiki boots and Bvlgari jewelry pieces.