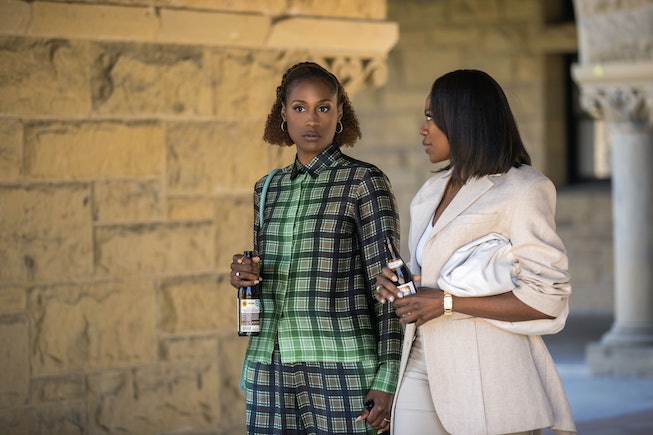 The following contains spoilers for Insecure.

#InsecureSundays are finally back, but for the last time. On Sunday, Oct. 24, HBO’s hit “dramedy” show, Insecure, released the first episode of its fifth and final season, and we’re already left with loose ends and unanswered questions, with the fate of our favorite characters lying in just nine more remaining episodes.

Since 2016, the groundbreaking series captivated its audience with authentic storylines, a gem-filled music soundtrack, and defining fashion moments in every episode, and as expected, the fifth season did not come to play. We already get a first look into how the Insecure characters evolve personally, like Molly’s hesitation to fall back into bad habits and Issa’s abrupt (but not-so abrupt) ending with Lawrence. Plus, the show’s finale season premiere is already packed with coveted style, thanks to costume designer Shiona Turini, who curates each look we see from Issa, Molly, Kelli, and Tiffany.

But one fashion-heavy scene stood out in particular: As Issa, who wears a striking green plaid pantsuit from Dries Van Noten, and Molly, in new Bottega Veneta, stroll around campus sipping on beers, fans quickly caught glimpse of Issa’s Telfar mini Shopping Bag in light sage green, a never-before-seen colorway. With the brand’s back-to-back collaboration launches, including a puffer-inspired collection with Moose Knuckles and shearling pieces with UGG, the highly sought-after “Bushwick Birkin” remains an unwavering fashion staple and celebrity favorite, even for some of our beloved Insecure characters.

Shortly after the first episode aired on HBO Max, “Insecuratea” podcast co-host Francheska Medina posted the brand new bag alongside a handwritten note on Twitter, which she received as a gift from Turini herself.

The letter read, “In honor of Insecure Season 5’s premiere we wanted to send you something special — Telfar’s never before seen colorway — SAGE! It will debut on Issa Dee this Sunday night, and we wanted you to be one of the firsts to have it. Thank you for all of your love and support of the show and hope you love this season’s costumes.”

After debuting the new bag on the show, it’s almost a matter of time before fans are sent scrambling once again to cop the highly-anticipated colorway. On Sunday, Nov. 7, Telfar released an email announcing that the style will be dropping on Tuesday, Nov. 9 at 9 a.m. EST. The Sage handbags will range in size from its usual small, medium, and large range, and will cost between $150 and $257. We strongly suggest you set your alarms now, because this color will sell out fast.

This article was originally published on Oct. 25, 2021